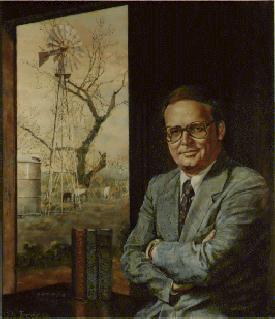 (Freddie) Ray Marshall is a labor union-aligned, progressive economist and retired University of Texas professor who served as Secretary of the U.S. Department of Labor during the Carter Administration. [1] Marshall was considered the most liberal of President Carter’s Cabinet members, bringing his work experience with the LQC Lamar Society to elect left-of-center candidates in the south to the Carter White House. [2] [3]

As Labor Secretary, Marshall pushed for a repeal of the Taft-Hartley Act’s right-to-work provisions, a federal takeover of coal mines during the 111-day United Mine Workers of America strike in 1977-78, and increased spending on the scandal-ridden Comprehensive Employment and Training Act (CETA) jobs program. [4] [5] [6] With other labor union-aligned scholars, Marshall co-founded the union think tank Economic Policy Institute where he promotes liberal expansionist immigration policies and other labor union-aligned economic agendas. [7] [8]

Freddie Ray Marshall was born on Aug. 22, 1928, in Oak Grove, Louisiana; while still an infant, his family  moved to Mississippi. [9] When Marshall was 11 years old, he and his four younger siblings were sent to live in an orphanage following their mother’s death. [10] Marshall fled the orphanage four years later, worked for a short time at a dental laboratory, and then at age 15, lied about his age to join the Navy, serving in the Pacific during World War II. [11]

After the war, Marshall attended school in Mississippi, first at Hinds Junior College and then Millsaps College, where he studied economics. [12] Marshall earned a master’s degree from Louisiana State University and a Ph.D. from the University of California at Berkeley, both in economics. [13] Strongly committed to organized labor, Marshall was a Fulbright Scholar, focusing on labor movements. He later taught at the University of Mississippi and Louisiana State, where he supported the civil rights movement and desegregation campaigns. [14] [15]

In 1962, Marshall left Louisiana to teach at the University of Texas at Austin, where he felt progressives had a better chance of winning battles over racial and economic justice. [16] In 1970, Marshall formed the Center for the Study of Human Resources to support labor-related issues. [17] The center was renamed the Ray Marshall Center when he retired from teaching in 1999. [18]

In the late 1960s, Marshall was part of the LQC Lamar Society, a group formed in 1966 to influence the political climate and elections in the South to favor left-progressive candidates, including Jimmy Carter who was elected Governor of Georgia in 1970. [19] [20] As governor, Carter was a commissioner of the Task Force on Southern Rural Development, which was chaired by Marshall and pushed for major federal funding to address rural poverty in the South. [21] The connection opened the door for Marshall to work on Carter’s 1976 presidential campaign, drafting speeches, position papers, and offering economic policy advice. [22]

In the meantime, Marshall continued his studies on unionizing rural, Latin American, and Black workers, and served on several governmental advisory boards including the Federal Apprentice Commission which he chaired in 1974. [23] He founded the nonprofit National Rural Center in 1976 and before his appointment as Labor Secretary, Marshall and the research groups he led had collected $1.5 million in Labor Department grants. [24]

Marshall also held positions with a number of left-leaning nonprofit organizations including the League for Industrial Democracy, the Rockefeller Foundation, the Robert Wood Johnson Foundation, and the Ford Foundation. [25] Marshall’s prolific writings on minority and rural workforces and labor unions were widely published for academic and governmental audiences.

President-elect Jimmy Carter formally nominated Ray Marshall for the position of U.S. Secretary of Labor on December 21, 1976. [26] On January 26, 1977, the U.S. Senate voted 74-to-20 to confirm Marshall as Labor Secretary; he was the last of Carter’s cabinet members to be confirmed. [27] [28] The conservative senators who voted against the confirmation did so in large part because they saw Marshall as too close to the AFL-CIO, which had offered Marshall a job as research director the prior year. [29] Among the no votes was freshman Sen. Orrin Hatch (R-UT), who, in his first speech from the Senate floor, declared Marshall an “obvious captive of big union labor bosses in this country.” [30]

During the January 13, 1977 confirmation hearing before the Senate Committee on Labor and Public Welfare, Marshall stated that he strongly favored repealing the right-to-work provision of the Taft-Hartley Act and outlaw 20 states’ right-to-work laws. [31] He also criticized Carter’s economic stimulus plan, saying the two-year package’s $10 billion in jobs spending was not enough while $20 billion in tax rebates and cuts was too generous. [32]

In early 1977, Secretary Marshall predicted a generally harmonious year in labor-management relations, even while warning the Carter administration of a possible strike by United Mine Workers of America, whose contract with mine operators would expire in December. [33] [34] Contract talks failed and the union’s 160,000 miners walked off their jobs on December 6, 1978. [35] The striking workers produced half of the nation’s coal supply from mines in eastern U.S. states. [36]

The strike lasted 111 days, during which the union’s bargaining council overwhelmingly rejected two tentative contracts and ignored Carter’s Taft-Hartley back-to-work order before reaching an agreement on March 9, 1978. [37] Throughout the strike, Marshall strongly urged federal seizure of the mines, but was ultimately overruled by other administration advisers who convinced President Carter to invoke the Taft-Hartley Act, as seizure would be a difficult sell to Congress and possibly even counterproductive. [38]

Later in life, Marshall called the administration’s involvement in the coal strike a “big mistake,” blaming the Department of Energy for exaggerating the likelihood that the strike would cause brownouts and blackouts, and insisting that he was the only person in the White House who knew anything about collective bargaining, negotiations, and dispute settlement. [39]

Government investigators uncovered widespread fraud and abuse CETA funds during Marshall’s tenure that led to indictments and convictions in at least 50 cities, including Atlanta, Miami, Indianapolis, Chicago, Philadelphia, and the District of Columbia, as well as in states including Ohio and Oklahoma. [44] [45] Secretary Marshall called the charges “grossly exaggerated,” but admitted enough legitimate examples occurred to jeopardize the program’s future. [46]

CETA also came under increasing criticism for abuse by so-called “CETA junkies” — cash-strapped cities, counties, and states that used the federal funds to pay existing workers instead of creating jobs for the disadvantaged and unemployed as required by law. [47] Nevertheless, these areas were crucial to Carter’s victory in 1976, and with the 1980 re-election campaign looming, the administration had a political interest in keeping local officials happy. [48] Therefore, Marshall defended CETA before Congress, promising to create a new special investigations office in the Labor Department and an overhaul of regional administrators. [49] [50]

Though widespread corruption, patronage, and waste in local public service jobs programs earned CETA a reputation as “the second most unpopular program in the country after welfare,” according to former U.S. Rep. David R. Obey (D-WI), Congress reauthorized CETA for the final time in 1979. [51] With just 15 percent of the program’s participants working in the private sector, and near-universal distaste for CETA, the Reagan administration followed through on its campaign promise to replace it with the Job Training Partnership Act. [52]

Marshall has spent his post-government years teaching, writing, and serving on government task forces and commissions. [55] In 1986, Marshall, Robert Reich, and Alexis Herman, who would both serve in the Clinton administration as Labor Secretaries, co-founded the Economic Policy Institute (EPI), a liberal think tank funded, chaired, and promoted by labor unions and labor union supporters. [56] [57] Marshall has used the EPI platform for his work promoting liberal expansionist immigration policies. [58] In 2009, the AFL-CIO and Change to Win announced the creation of The Unity Framework, immigration reform recommendations for the Obama administration that were developed in consultation with Marshall and EPI. [59]