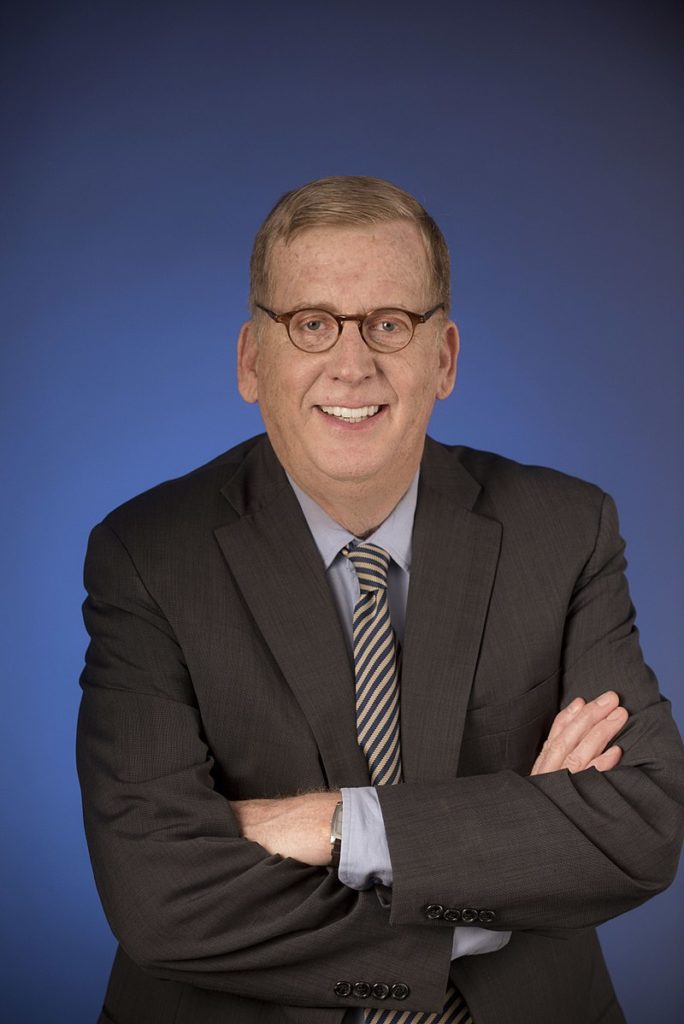 Paul Smith is a left-of-center lawyer who has argued 21 cases before the Supreme Court. [1] He has advocated against traditional marriage, religious liberty, and voter ID laws. [2] As of early 2022, he works as vice president for litigation strategy at the Campaign Legal Center, an advocacy group aligned with left-of-center interests that support strict enforcement of campaign finance laws.

Shortly after graduating from Yale Law School, Smith clerked for Judge James L. Oakes on the U.S. Court of Appeals for the Second Circuit from 1979 to 1980. [4] Immediately following this clerkship, Mr. Smith then clerked for then-Justice Lewis Powell on the Supreme Court. [5] Justice Powell was nominated by President Richard Nixon yet often had a left-of-center voting record, upholding legalized abortion, striking down laws to provide time for prayer in public school, and supporting race-based affirmative action policies. [6]

Following his clerkships, Paul Smith worked as an associate and eventually became a partner at Klein, Farr, Smith, & Taranto (also known as Onek, Klein, & Farr and Farr & Taranto), a firm specializing in cases that appear before the Supreme Court. [7] Smith worked at Klein, Farr, Smith, & Taranto from 1981 until 1994, at which point he became a partner at Jenner & Block, [8] a large law firm based in Washington D.C., with over 500 lawyers. [9] Within Jenner & Block, Smith joined committees on election law and redistricting as well as a committee on diversity and inclusion.

Paul Smith was a longtime advocate for granting gay and lesbian couples legal marriage recognition. He has argued 21 cases before the U.S. Supreme Court, and one of the most notable cases was Lawrence v. Texas, a landmark 2003 ruling that struck down laws that criminalized consensual sodomy nationwide. [11]

While at Jenner & Block, Mr. Smith also argued in the U.S. District Court of the District of Massachusetts against the Defense of Marriage Act that defined marriage as the union between one man and one woman for federal purposes. [12]

In 2010, Mr. Smith led a team that worked on Christian Legal Society v. Martinez. His client won the case in which the Supreme Court determined that religious organizations at public college campuses must be forced to select student officers who reject the religion of the organization. [13] The case centered on the desire of the Christian Law Society at University of California to only elect officers in the group who support Christian teachings on marriage and sexuality. [14]

Paul Smith has argued three cases before the Supreme Court on election administration or voting rights. In 2008, he argued for the elimination of identification requirements for voting in the case Crawford v. Marion County, where the court ultimately ruled that voter identification laws could be constitutional. [15]

Smith is also a part of the National Task Force on Election Crises, [16] an allegedly bipartisan organization that advocates for a variety of left-of-center policies, including expanding early voting and mail-in voting and also removing the administration of elections from control by elected officials. [17]  The National Task Force on Election Crises promotes the left-wing narrative that then-President Donald Trump “incited a violent insurrection” against American democracy that “culminated with white supremacist rioters attacking the Capitol to not only overturn the Constitutional order, but also to take hostages and assassinate members of Congress and the Vice President.” [18]

Other members of the National Task Force on Election Crises include representatives from other left-of-center organizations such as the Washington Post, The Carter Center, the Harvard Kennedy School, Google subsidiary Jigsaw, the NAACP Legal Defense Fund, League of Women Voters, the Carnegie Endowment for International Peace, Voto Latino Foundation, and Democracy Fund. [19]

Paul Smith was named by Chambers USA as one of America’s top lawyers in appellate litigation, media and entertainment law, and First Amendment litigation. He was one of “Washington’s Top Lawyers” in Washingtonian magazine in 2010 and was named by Washington DC Super Lawyer as one of the “Top 10 Lawyers in D.C.” [20] That same year, he was given the Thurgood Marshall Award from the American Bar Association. [21] In 2012 he was named the DC First Amendment Lawyer of the Year by Best Lawyers and the National Law Journal put him among the “Decade’s Most Influential Lawyers.” [22] He received the Legal Aid Society of D.C.’s Servant of Justice Award. [23]

Mr. Smith was elected to the Board of Trustees at Amherst College in 2016. He has also previously been a member of the board of directors or governors for the American Constitution Society, the Washington Lawyers Committee for Civil Rights and Urban Affairs, Lambda Legal, and the D.C. Bar. [24]