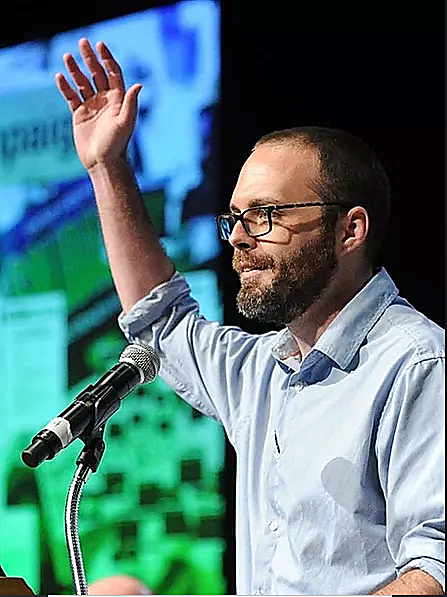 Patrick Young is one of the main organizers of Shut Down DC, an environmentalist activist coalition that conducted demonstrations blocking roadways in Washington, D.C. in September 2019. [1] He is an organizer and campaigner, and works with labor unions including the Service Employees International Union (SEIU) and Teamsters, environmentalist activist organizations, and left-of-center community-based nonprofits. [2]

Young is currently a senior research analyst at the International Brotherhood of Teamsters. [3] He has previously worked to organize workers at the University of Pittsburgh Medical Center (UPMC) while working for the Service Employees International Union (SEIU), and is a former strategic campaigner for the United Steelworkers. [4] Young was also president of a Steelworkers local. [5]

He previously worked at Rising Tide for 15 years where he organized various environmentalist demonstrations and events. [6] [7]

Young served on the board of both the Responsible Endowments Coalition and the Center for Coalfield Justice. [8]

Young supports and works with groups that organize both labor and climate change demonstrations and events. Such efforts include a union protest of the American Legislative Exchange Council (ALEC) in Pittsburgh in 2016,[9] and multiple rallies of United Steelworkers union members in 2015 that took place in Pittsburgh and two other cities. [10]

While working with Rising Tide, Young was part of organizing actions against the continued development of fossil fuel resources, including the 2013 march targeting the Pennsylvania Department of Environmental Protection’s (DEP) Southwest regional office,[11] and a 2017 traffic blockage outside the Southpointe office park, where several large energy companies are located. [12]

Shut Down DC has aligned its demands with the platform put forward by Strike With Us, which includes the socialist policy package known as the Green New Deal, which would halt all conventional fuel extraction and planned infrastructure projects. [16] [17]