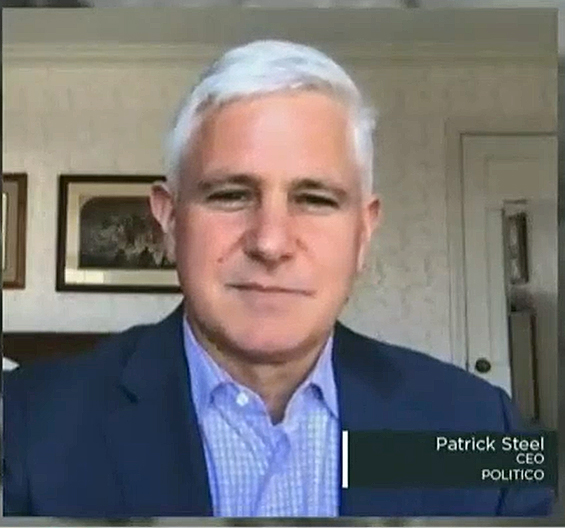 Steel is married to Lee Satterfield,[3] a former staffer in the Obama and Clinton administrations who was nominated by President Joe Biden to serve as Assistant Secretary of State for the Bureau of Educational and Cultural Affairs in the U.S. Department of State. [4]

Steel subsequently held a variety of positions throughout Clinton administration. He initially worked in the White House as Scheduler for President Bill Clinton, then went to the U.S. Department of Agriculture (USDA) where he served as Deputy Chief of Staff to the Secretary of Agriculture from 1997 to 1999. Also in the Clinton administration, Steel worked as the Associate Administrator of the Foreign Agricultural Service at the USDA and as Senior Advisor on the White House China Trade Relations Working Group. [6]

Satterfield later worked for the Democratic National Committee (DNC), in the Obama administration’s State Department under Secretary Hillary Clinton, and as the president and chief operating officer of the Meridian International Center. [9] In 2021, President Biden nominated Satterfield to serve as Assistant Secretary of State for the Bureau of Educational and Cultural Affairs, a role she previously held in an acting capacity during the Obama administration. [10]

In 2017, Patrick Steel was hired as the CEO of political trade publication Politico, taking over operations of the news organization from owner and co-founder Robert Albritton. Albritton himself took over CEO duties in 2016 after Politico suffered a public falling out with co-founder Jim VandeHei, who left to start rival political news site Axios. Steel’s departure from FBR & Co, which is based in the same Arlington, Virginia neighborhood as Politico, came at a time when the investment bank was being sold to B. Riley Financial Inc. in a $160 million stock deal. [12]

Upon Steel’s hiring, Politico defended his past partisanship and donations to Democratic campaigns, which totaled over $60,000 and included donations to Democratic presidential campaigns for former Vice President Al Gore, former President Obama, and former Secretary Clinton. In response to criticism, Politico stated that Steel’s duties as CEO ran counter to ideology, claiming that Steel was simply a businessman. [13]

In February 2021, Steel announced his intention to leave Politico at some time during the summer of 2021. Steel stated that with a new presidential administration, it seemed like an opportune time to start another chapter in his career. Steel’s announced departure came upon the heels of three notable reporters, Jake Sherman, Anna Palmer, and John Bresnahan, leaving Politico to start a rival news site, Punchbowl News. [14]