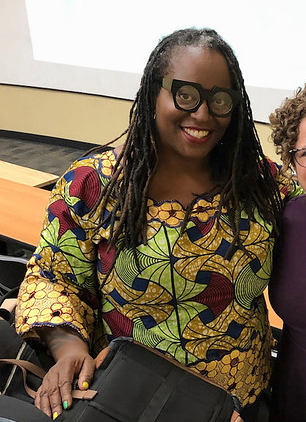 Nse Ufot was the former chief executive officer of the New Georgia Project (NGP) and the New Georgia Project Action Fund, the voter-turnout groups created by Georgia Democratic politician Stacey Abrams. Ufot and the NGP rose to prominence in the 2020 elections when they played key roles in swaying Georgia to vote for a Democratic presidential candidate for the first time in nearly 20 years and to elect two Democratic U.S. Senators, giving Democrats a narrow majority in the U.S. Senate. Ufot had reportedly stepped down from her positions in October 2022 “out of love” [1] as stated by a letter written by her and released onto the company website, but according to The Washington Free Beacon, private correspondences show that Ufot was fired in October 2022 along with several employees including then-chief legal officer and deputy general counsel. [2]

In 2021, Ufot received the Great Immigrants Recipient award from the Carnegie Corporation, a major left-of-center grantmaker. [3]

Nse Ufot was born in Nigeria to a Christian family. [4] She immigrated to the United States at a young age and was raised in Georgia. [5] At 14, she served as a page in the Georgia House of Representatives. Ufot attended the Georgia Institute of Technology and the University of Dayton School of Law. [6]

In 2014, the NGP alleged that it submitted more than 81,000 new voter registrations before the state’s deadline but found that more than 40,000 of the submissions were not included on the subsequent voter rolls. The NGP filed a lawsuit against the state and staged a sit-in in the office of then-Secretary of State Brian Kemp (R-GA). Secretary Kemp denied any wrongdoing and the Fulton County court system refused to consider the case. [10]

Georgia was a key battleground state in the 2020 elections, especially in the presidential election between former Vice President Joe Biden (D) and President Donald Trump (R), and in the fight over the U.S. Senate majority. In the presidential election, Georgia voted for the Democratic candidate for the first time since 1992. The U.S. Senate majority was ultimately decided in the Democrats’ favor by the Georgia run offs which elected Raphael Warnock (D-GA) and Jon Ossoff (D-GA). The NGP’s efforts under Ufot to register voters, amounting to 500,000 over seven years, have been credited for the Democratic successes in Georgia. [11]

In December 2020, while the Georgia U.S. Senate run-off elections were underway, Georgia Secretary of State Brad Raffensperger (R) launched an investigation into NGP. Raffensperger began the investigation after he received three voter registration mailers from NGP intended for his son, who had died in 2018. [12]

In February 2021, the Georgia State Election Board launched an investigation in NGP and newly elected Senator Warnock over allegations that the organization had purposefully delayed sending 1,200 new voter registration forms to election officials. Senator Warnock was implicated because the NGP’s tax forms listed him as CEO at the time, though Ufot later clarified Senator Warnock was the chairman and had been mistakenly identified as CEO in the tax forms. [13]

After the 2020 election, Ufot and the NGP focused their efforts on opposing Georgia SB 202, which proposed the introduction of numerous regulations designed to increase voter security. Ufot claimed that the passage of SB 202 and similar laws in other states would be devastating to the Democratic Party’s electoral potential: “If there isn’t a way for us to repeat what happened in November 2020, we’re f—ed.” [14] She also said, “voter suppression is the number one priority for the Republican Party.” [15]

One of Ufot’s strategies in challenging the bill was to target major Georgia-based corporations which had contributed to Republican state legislatures, including Coca-Cola, Delta Airlines, General Motors, and Aetna. NGP attracted national attention by purchasing billboard advertisements near major corporate headquarters. [16]