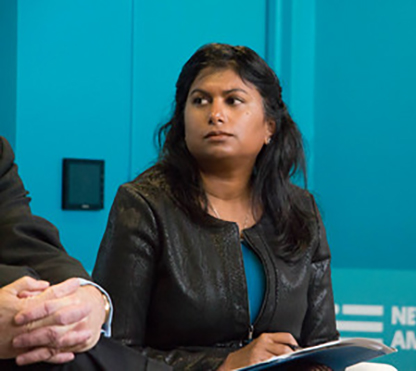 Nilmini Rubin is the head of the coalition Fix the System. The coalition claims to make the argument for election administration and other political system changes to moderate and conservative voters.

Before joining Fix the System, Rubin was known for her work in international development and foreign policy. Rubin worked in both the private sector and for the government in the foreign policy arena. She worked as an advisor to the Republican presidential campaigns of former Ohio Gov. John Kasich and former Massachusetts Gov. Mitt Romney. She also worked in the administration of President George W. Bush and on Capitol Hill.

She is married to Democratic strategist Joel Rubin.

Nilmini Rubin joined the Treasury Department as an economist, specializing in Africa. She then moved to the National Security Council under President George W. Bush and became its director of finance. She secured agreements on non-proliferation, international health, and foreign aid. [2]

Rubin then moved over to Capitol Hill and served as a senior professional staff member for the U.S. Senate Foreign Relations Committee under U.S. Senator Richard Lugar (R-IN). She led efforts on international finance, economic growth, and anti-corruption. [3]

Rubin then moved over to the House of Representatives, becoming the senior advisor for global economic competitiveness at the U.S. House Foreign Affairs Committee. She directed technology, energy, trade, and economic policy for the committee. She would spearhead bipartisan legislation that would increase internet access in developing countries. She would work for the House until 2016. [4]

While working on Capitol Hill, Rubin Nilmini advised some Republican candidates for president on foreign policy matters. She worked as an advisor to the campaigns of Mitt Romney in 2012 and for John Kasich in 2016. [5]

Nilmini Rubin later joined Tetra Tech as its vice president for economic development in September 2016. Among the projects Rubin worked on was helping to engage the private sector in international development. In particular, she worked on a project in Indonesia that would bring together the public and private sector to increase opportunities in the country. [6]

In March 2020, Rubin became the chair of a coalition called Fix the System. The coalition advocates for liberal-backed election administration and political system policies to conservative and moderate voters. [7]