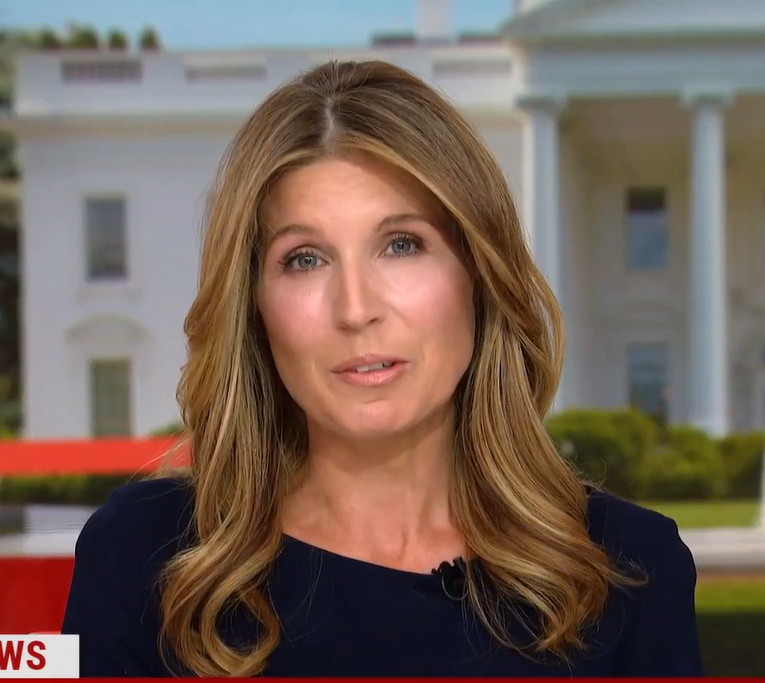 Nicolle Wallace is a former Republican political operative turned left-of-center television host who hosts “Deadline: White House,” which debuted with her as the anchor on the left-of-center cable network MSNBC in 2017.

Wallace worked as the White House communications director during the George W. Bush administration and during Bush’s 2004 reelection campaign, and had previously worked for former Florida Governor Jeb Bush (R). Wallace worked on John McCain’s 2008 presidential campaign, after which she frequently criticized the campaign and McCain’s selection of then-Alaska Gov. Sarah Palin (R) as his running mate. Wallace ended her affiliation with the Republican Party after the 2008 election and pursued a media career that included a one-year stint on the cast of The View and four years as a panelist for MSNBC’s Morning Joe. [1] From 2005 to 2019, Wallace was married to Mark Wallace, a former U.S. representative to the United Nations for management and reform with ambassadorial rank and CEO of United Against Nuclear Iran. [2] [3]

Following the 2016 election of President Donald Trump, Wallace further solidified her separation from the Republican Party and became highly critical of Trump and his administration, calling it a “freak show” and promoting claims of collusion between Trump and Russia. [4] [5]

Nicolle Wallace was born Nicolle Devenish in California and raised in the San Francisco Bay Area. She received an undergraduate degree from the University of California at Berkeley and a master’s degree in journalism from Northwestern’s Medill School of Journalism. She worked as an on-air local reporter in California before beginning her career in politics as a staffer for the Republican Caucus of the California State Assembly. [6]

In 1999, Wallace (then Nicolle Devinish) moved to Florida to become the press secretary for newly elected Governor Jeb Bush (R). The following year, she worked on the recount effort for the George W. Bush campaign during the 2000 election—during which she met her first husband, Mark Wallace, who was then the general counsel to the Bush campaign in Florida. [7]

Following George W. Bush’s inauguration as president, Wallace joined his White House as Director of Media Affairs and worked on Bush’s 2004 reelection campaign before being named White House Communications Director in 2005 at the beginning of Bush’s second term. [8]

Wallace became a well-known in media circles during her stint as White House communications director and was generally described as well-liked by the White House Press Corps despite representing an administration that was at times unpopular with the media. Wallace was described by the Washington Post as part of a “circle of younger advisors” that emerged during Bush’s second term that urged the Bush administration to be “less secretive and more aggressive in explaining its positions to the public,” particularly regarding the war in Iraq. The Post reported that Wallace and White House Counselor Dan Bartlett urged President Bush “to be more candid in acknowledging setbacks in Iraq.” Wallace’s White House colleagues described her as “persuasive” within the West Wing. [9]

In 2006, Wallace stepped down as White House communications director. Her departure came as then-Chief of Staff Joshua Bolten was overseeing a shakeup—but it was described as being planned for some time as her husband, Mark Wallace, had been appointed by Bush to serve as a representative with ambassadorial rank at the United Nations in New York and she was reported as planning on moving to New York to join him. [10]

Following the end of her stint as White House Communications Director in 2006, Wallace moved to New York to join her then-husband Mark, who was serving as a representative to the UN, and became a political analyst at CBS News before leaving prior to the 2008 election to join the staff of the presidential campaign of then-U.S. Senator John McCain (R-AZ). [12]

In the lead-up to the 2008 elections, Wallace was recruited by Steve Schmidt, who was then in charge of then-U.S. Senator John McCain’s (R-AZ) presidential campaign, to join the McCain campaign staff. Wallace’s experience with the McCain campaign was marked by clashes between her and vice presidential candidate Gov. Sarah Palin (R-AK). Wallace described her relationship with Palin as having “exploded” following an interview with Katie Couric, which Wallace facilitated. Wallace stated that Palin had felt as though Wallace had “set her up for failure” with the Couric interview. [13]

Wallace later stated that she did not vote for McCain in the 2008 election. [14]

In 2018, Wallace and Schmidt were among former McCain campaign aides who had become “left-wing media darlings” and were notably not invited to Sen. McCain’s funeral. John McCain’s daughter Meghan McCain stated that Wallace’s transformation into a left-of-center news anchor and staunch supporter of Democratic candidates allowed her to see the campaign’s treatment of Palin in a new light and alleged that Wallace set Palin up for failure by arraigning the interview with Katie Couric. [15]

Following the 2008 election, Wallace began writing a series of political novels and, in 2013, joined “Morning Joe” on MSNBC as a regular panelist. In 2014, Wallace was a cast member of “The View,” but left after one season and said she was let go by producers for “not being Republican enough.” [16]

Wallace continued as a regular panelist on “Morning Joe” and was highly critical of Donald Trump’s campaign and presidential administration. At the onset the Trump administration, Wallace pitched MSNBC president Phil Griffin on a show largely focused on the White House and Trump administration and, in 2017, she debuted as the anchor of the 4 PM news hour on MSNBC with her show titled “Deadline: White House,” which replaced “MSNBC Live with Steve Kornacki” in the same time slot. [17]

On her MSNBC show, Wallace was highly critical of the Trump administration and many Republican officials. She was described by the New York Times as having embraced a role as “public scold” of the Republican Party, frequently criticizing various Republican senators and formed elected officials such as former House Speaker Paul Ryan (R-WI). She also described comments from Trump on Twitter as a “freak show.” [18]

Wallace has also promoted claims of collusion between Trump and Russia. In a March 2018 Twitter statement, Wallace said that Trump’s disputes with the FBI and the FISA courts regarding the surveillance warrants targeting Carter Page proved Trump was “very worried about his criminal exposure.” [19]