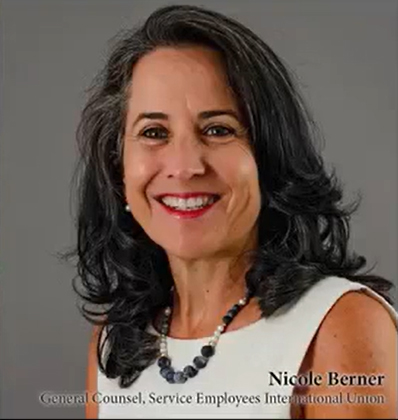 Nicole Berner is a left-of-center activist currently working as general counsel for the Service Employees International Union (SEIU) as a partner in the labor union-side labor law firm James and Hoffman PC.[1] Prior to joining James and Hoffman, Berner was an in-house lawyer for the SEIU and a staff attorney for the Planned Parenthood Federation of America.

Berner received her bachelor’s degree in Women’s Studies from the University of California Berkeley.[2] After completing her undergraduate degree, Berner remained at Berkeley where she received her law degree alongside a master’s degree in public policy.[3]

Immediately after college, Berner served as a clerk to Judge Betty Binns Fletcher on the United States Court of Appeals Ninth Circuit and for Judge Thelton E. Henderson on the U.S District Court for the Northern District of California.[4]

Berner is the same-sex spouse of Ruti Berner-Kadish, the Israel-born director of foundation relations for the New Israel Fund (an American liberal organization that funds left-of-center activism in Israel); the couple have three children. With support from organizations funded by NIF, the couple sued to have the Israeli government recognize same-sex parents on official documentation.[5]

Prior to her work with the SEIU, Berner served as a staff attorney at Planned Parenthood Federation of America, working on cases across the United States and lobbying on Capitol Hill to expand abortion access.[6] Berner continues to serve on the board of several left-of-center legal advocacy organizations, including the American Constitution Society for Law and Policy (ACS) and the National Partnership for Women and Families (NPWF).[7]

Berner is currently a partner at James & Hoffman, where she serves as general counsel for the SEIU. Prior to her tenure as general counsel, Berner served as SEIU in-house counsel from 2006-2017.[8] Berner advises SEIU organizing campaigns and assists in bargaining with nationwide employers. Berner has had success in pushing left-of-center labor policies, supporting the SEIU’s pressure campaign to create the “New York Fast Food Wage Board” to establish a $15 per hour wage mandate and leading the union’s challenge to Pennsylvania’s voter identification requirement.[9] [10]

Berner has also assisted in SEIU Supreme Court advocacy, serving as counsel to develop the

SEIU amicus brief in successful defense of Obamacare.[11] Berner is also credited as the “architect” of the SEIU brief in the case which overturned the Defense of Marriage Act and of an amicus brief which supported Obergefell v. Hodges, the case that established state recognition of same-sex marriage nationwide.[12]

Berner supported SEIU in the “Fight for 15 and a Union” movement, a national call for unionization across all industries and a 15 dollar minimum wage.[13] In an August 2019 opinion piece with On Labor, a left-of-center labor unionist blog, Berner said that sectors without the protection of labor laws are left vulnerable to “the continuing impact of institutional racism.”[14]

Berger called for a sweeping range of left-of-center labor policies in the op-ed, most radically national, industry-wide bargaining for wages, benefits, and working conditions, a practice known as “sectoral bargaining.”[15] Berger further argued that the National Labor Relations Act should serve as a floor for labor organizing, allowing workers in cities and states to unionize beyond federal law.[16] Finally, Berger demanded that “every public dollar” be used to create union jobs, that every federal worker be paid $15 per hour and be able to unionize, and that union jobs be central in every economic proposal.[17] Berger argued that a Democratic candidate for president must meet all of the above listed conditions in order to receive the SEIU endorsement.[18]

In October 2019, liberal activist group Demand Justice released a list of 32 candidates for Supreme Court nominations should a Democrat win the presidency in 2020.[19] Nicole Berner was on that list, cited as one of the “brilliant lawyers who have spent their careers fighting for progressive values.”[20] The list drew widespread criticism, featuring other controversial figures, including lawyers who had called for the abolition of Immigration and Customs Enforcement and one who compared President Donald Trump’s view of the judiciary to that of segregationist George Wallace.[21]

In December 2019, a project by the pro-union Payday Report revealed that top officers in the SEIU, including union president Mary Kay Henry, failed to take action against sexual predators within the union, even promoting some men after they had been accused of sexual misconduct.[22] SEIU vice president Dave Regan, who also serves as president of United Healthcare Workers West, was implicated in several sexual misconduct allegations and is facing a lawsuit by current SEIU staff member Mindy Sturge.[23] Several other SEIU came out in support of Sturge, calling the sexual harassment by Regan in the SEIU-UHW office “constant.”[24]

In 2018, Sturge reached out to union president Henry in order to express her discomfort. On behalf of SEIU, Berner responded in November 2018 that the national union would not meet with Sturge and that the matter would be best investigated by SEIU-UHW, the union of which Regan, whom she was suing for sexual misconduct, was president.[25] Berner said that the SEIU does not have a role in investigating allegations at the local union level, declining to help Sturge in her sexual harassment case.[26]