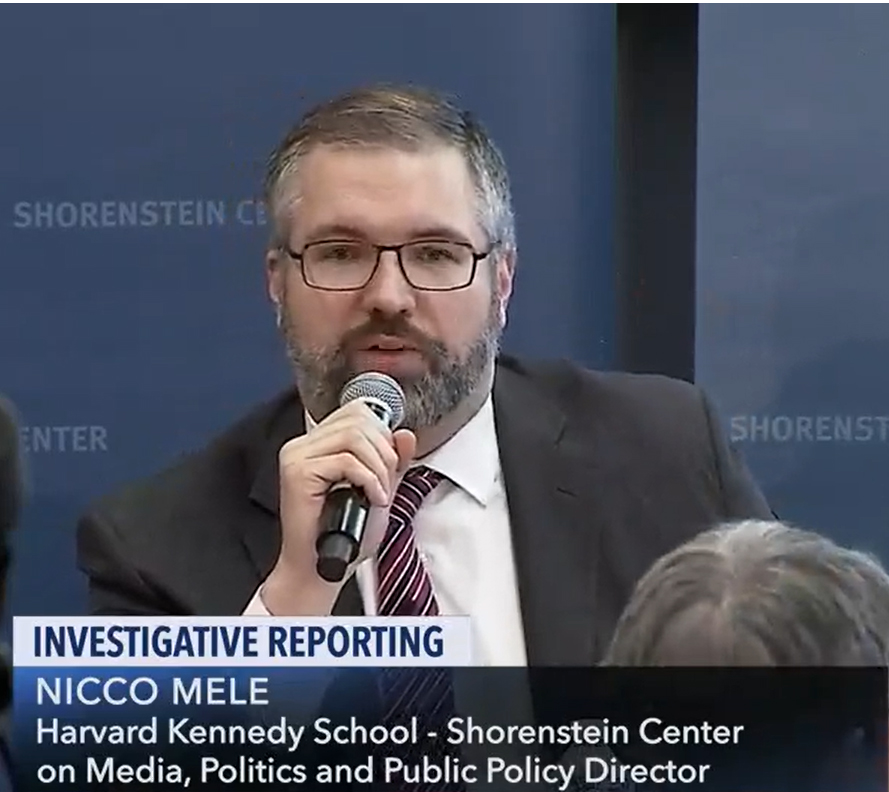 Nicco Mele is a nonprofit manager and university instructor. He is the chairman of the board of Democracy Works, an activist group which works to increase the voter participation among left-of-center demographics and receives funding from leading left-of-center philanthropic institutions, such as the MacArthur Foundation and the Knight Foundation.

He is also the managing director of the Draper Richards Kaplan Foundation, a grantmaking organization which supports new and growing left-of-center activist groups, and sits on the boards of numerous other left-of-center organizations. Mele has previously held instructor and fellow positions at Johns Hopkins University, Harvard University, and the University of South Carolina. [1][2]

Nicco Mele attended the College of William and Mary from 1995 to 1999 and received a bachelor’s degree in government. He went on to work as the webmaster for Common Cause, an activist group pushing for campaign finance laws favoring left-of-center candidates, and the International AIDS Vaccine Initiative. During the 2004 primary election season, Mele was the director of internet operations for the campaign of Democratic presidential candidate Howard Dean. That year, he also co-founded the digital strategy consulting firm Echo & Co. Between 2006 and 2014, Mele worked as an instructor at Johns Hopkins University and Harvard University’s Kennedy School of Government. In 2015, he briefly worked as the deputy publisher of the Los Angeles Times before joining the University of South Carolina’s Annenberg Center on Communication Leadership and Policy, where he researched business models for online media companies. [3]

Nicco Mele sits on the boards of several left-of-center nonprofits. These include Recidiviz, a criminal justice research organization, and Code2College, which aims to raise the number of university students in technical fields, with a particular emphasis on increasing racial diversity among students. [4]

In 2011, Mele became the board chair of Democracy Works, an activist organization which pushes election reforms favoring left-of-center constituencies. [5] The organization was founded by self-described entrepreneurs Kathryn Peters and Seth Flaxman, who both attended the Harvard Kennedy School where Mele was an instructor. [6][7]

Democracy Works calls itself nonpartisan, but promotes left-of-center policies expanding mail-in voting, and blames low voter turnout on “misinformation and confusion.” [8][9] The organization is funded by leading left-of-center philanthropic institutions, including the Pew Charitable Trusts, the Tides Foundation, the Democracy Fund, the Omidyar Network Fund, and the Rockefeller Brothers Fund. [10]

Democracy Works is a co-founder of the Civic Alliance, a network of major corporations which have committed to promoting the initiatives of a group of left-of-center activist organizations to their employees. [11] The Civic Alliance has more than 1,200 member firms and claims to have exposed more than 5.5 million employees to these initiatives. Notable members of the alliance include:

Amazon, which has previously removed right-of-center media from its online store[12]

During the 2020 election season, Democracy Works worked with tech giant Google to ensure that only election information which the organization considered to be “true” would show up in search results. Google also collaborated with Democracy Works to remove election predictions deemed likely to be “perceived as claims for one candidate or against one candidate.” Google announced it would do so despite admitting that some “perfectly benign” search inquiries would be affected by this censorship. [13]

Nicco Mele contributed to 2008’s Mousepads, Shoe Leather, and Hope: Lessons from the Howard Dean Campaign for the Future of the Internet, edited by Thomas Streeter, as well as 2012’s Margin of Victory: How Technologists Can Help Politicians Win Elections, edited by Nathaniel Pearlman. In 2013, Mele released The End of Big: How The Digital Revolution Makes David The New Goliath. [14]