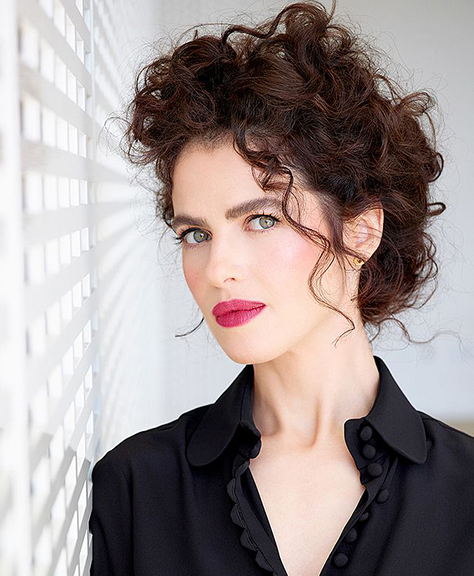 Neri Oxman is an American-Israeli academic and designer. She is the wife of American celebrity hedge fund manager and left-of-center donor Bill Ackman.

In 2019, the Boston Globe reported on the connections between the Massachusetts Institute of Technology (MIT) Media Lab, where Oxman was employed as an associate professor, and sex offender Jeffrey Epstein, who facilitated or made $7.5 million in contributions to the Media Lab including $125,000 to Oxman’s Mediated Matter project. At the direction of her superiors, Oxman mailed a 3-D printed marble to Epstein as a “token of appreciation” for his financial support of the Media Lab. [1] [2]

Neri Oxman was raised in Haifa, Israel. To fulfill her compulsory military service, she enlisted in the Israeli Air Force, eventually becoming a first lieutenant. In 2010, following her graduation from an architectural doctoral program at the Massachusetts Institute of Technology (MIT), Oxman became an associate professor in the MIT Media Lab. [3]

In September 2010, Neri Oxman founded the Mediated Matter research group in the Massachusetts Institute of Technology (MIT) Media Lab. The group, which consisted principally of Oxman and a staff of assistants, focused on studying designs and design processes inspired by nature while it was active. Projects of the research group included Radiofungi, which studied the possibility of creating biological pigments that could withstand ionizing radiation harmful to astronauts, and Aguahoja, which studied and attempted to replicate natural objects using organic materials with a water-focused approach. [4] [5] The research group ceased its activity in May 2021. [6] [7]

In 2016, the MIT Media Lab launched the Journal of Design Science with Oxman as a member of its editorial board and as one of the publication’s inaugural contributors. When launching the journal, the lab’s director Joichi Ito touted its unorthodox features, including its eschewal of anonymized peer-review and access fees, as well as a digital interface program which allowed readers to leave publicly accessible comments on particular sections of text. [10]

In September 2019, Oxman was featured in the second episode of the second season of the Netflix-produced documentary series Abstract: The Art of Design, directed by Morgan Neville. [11]

American financier and convicted sex offender Jeffrey Epstein made donations reported as at least $7.5 million to the Massachusetts Institute of Technology (MIT) Media Lab, where Oxman was employed as an associate professor, with $125,000 donated to her Mediated Matter research group. In accordance with MIT’s internal guidelines, the donations and the gift were not made public in order to avoid enhancing Epstein’s reputation by association with the institution. In 2019, following Epstein’s arrest on charges involving alleged sex trafficking of minors and news coverage reporting on his financial relationships with high profile institutions and individuals, the Boston Globe obtained emails from Oxman’s husband, celebrity hedge fund manager Bill Ackman, pleading with the Media Lab’s director Joichi Ito to not mention Oxman in her statements to the press regarding Epstein. [12] Ito had requested that Oxman’s team produce a gift of appreciation for Epstein’s financial support of the Lab. [13]

In his emails, Ackman mentioned that Oxman “already ha[d] enough on her plate breastfeeding a three-month-old baby” and was presenting “her upcoming MoMA [Museum of Modern Art] show.” He further claimed that he did not “want to see her forced into a position where to protect her name she is required to be transparent about everything that took place at MIT with Epstein.” [14]

Following the Boston Globe’s coverage of the emails, Oxman issued a statement saying among other things that “Joi assured [him] that Epstein was an approved donor who wished to devote his fortune to science and technology, in part to make amends for wrongs he had committed earlier in his life.” Oxman also claimed that the director of the lab “vouched for Epstein and his sincerity about his desire to do good,” and Oxman claimed to “regret” accepting the donations. [15]