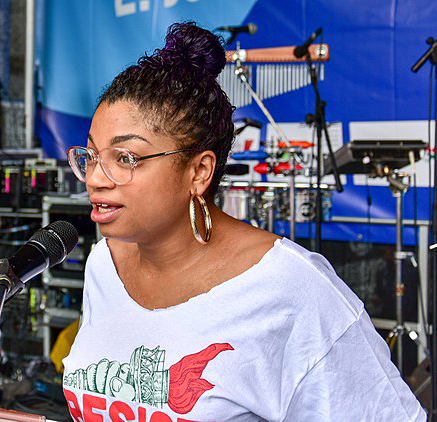 Nelini Stamp is a left-of-center activist who works as national organizing director of the Working Families Party (WFP), a pro-labor union political party which primarily operates in the state of New York. Stamp participated in the Occupy Wall Street movement and has worked on campaigns for local political offices across New York State. [1]

In 2017, Stamp helped lead a harassment campaign against then-U.S. Senate Minority Leader Chuck Schumer (D-NY) and other Democratic lawmakers who had indicated willingness to work with President Donald Trump. [3]

The state of New York has several small but active third parties, including the left-wing Working Families Party and right-of-center Conservative Party, which enjoy a degree of influence because candidates in the state can run on multiple party platforms. [4] Stamp joined the WFP in 2008 and rose to the position of national organizing director. In 2011, she participated in the Occupy Wall Street protests against large companies, serving as a liaison between various left-of-center groups and activists present at the demonstrations. [5]

Stamp has campaigned for WFP-endorsed politicians in New York State. In 2018, she organized get-out-the-vote efforts for WFP-aligned gubernatorial candidate Cynthia Nixon, who challenged Governor Andrew Cuomo (D-NY) for the Democratic Party nomination. During this time, Stamp worked as director of strategy and partnerships with WFP. [6]

Freedom Side and Dream Defenders

Freedom Side was a movement of left-of-center African-American activists that launched in 2014 with Stamp as its spokesperson. Speaking to Black Entertainment Television (BET), Stamp said that the organization would take advantage of demographic shifts in the United States which, according to Stamp, would grant African Americans and other minority groups a “historic majority.” BET reported that members of the organization Dream Defenders would make up Freedom Side’s leadership. [7]

Dream Defenders promotes left-of-center policies, including ending the existence of prisons and defunding law enforcement organizations. The organization calls itself feminist, claiming that the leading cause of death for young African American women domestic violence, and socialist. [8] Dream Defenders supports eliminating national borders, which it has calls “militarized” and “totally arbitrary.” The organization also supports ending private property, claiming that all that exists are “public lands that are in private hands.” [9]

Stamp is a member of the Hispanic racial identity group Mijente, meaning “my people.” [10] Mijente promotes demographic change in the United States and aims to increase the political power of Hispanic people, who the group claims represent one-fifth of the United States’ population. The group calls itself “pro-indigenous” and “pro-pachamama,” referring to a pagan idol worshiped by some South American tribes. [11] Mijente also promotes the slogan “chinga la migra,” roughly translating to “f*** immigration enforcement.” [12] The group engages in pressure campaigns to eliminate gang databases, decrease border security measures, and abolish detention facilities for illegal immigrants. [13]

Following the inauguration of President Donald Trump, several Democratic lawmakers voiced their tentative support for working with the President on issues such as infrastructure and initial appointees. Stamp partnered with housing services worker Elizabeth Zeldin to organize protests against the lawmakers at their New York City residences. They initially demonstrated at the office of U.S. Senator Kirsten Gillibrand (D-NY), calling on her to oppose every single one of President Trump’s Cabinet picks. Eventually, they were able to bring at least 3,000 people outside the apartment of then-U.S. Senate Minority Leader Chuck Schumer (D-NY) to demand that he and other Democratic leaders show more opposition towards the President. [14]

In February 2021, the left-of-center magazine Time published an article celebrating a joint campaign by company executives, labor union leaders, and Democratic Party operatives to shut down President Trump’s challenges to the 2020 election results. The article reported that Stamp had helped organize a group of “election defenders,” or poll watchers trained to prevent calls for recounts. [15]