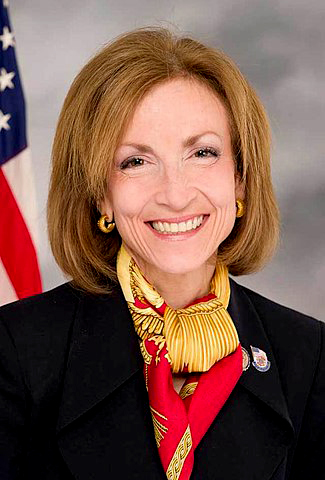 Nan Hayworth is a Republican politician who served as U.S. Representative from New York’s 19th Congressional District from 2011 until 2013. In 2018, Hayworth was appointed by President Donald Trump to the President’s Council on Sports, Fitness and Nutrition.[1]

She is also the chairwoman of the board for Conservamerica, a Republican-aligned environmentalist advocacy organization.[2]

Hayworth was born December 14, 1959 in Chicago, Illinois. Her family later relocated to Munster, Indiana where she graduated from Munster High School.  She went on to attend Princeton University and received her M.D. from Cornell University in 1985.[3] Hayworth practiced ophthalmology in Mount Kisco, New York for 16 years, followed by a stint as vice president and medical director of advertising agency Cline, Davis & Mann.

In 2010, Hayworth defeated incumbent U.S. Rep. John Hall (D-NY) by a five-point margin to become the first female physician to serve in the U.S. Congress. She was a member of the House Financial Services Committee and the Majority Whip Teams, as well as the House Doctors’ Caucus.[4]

She also co-sponsored the Puppy Uniform Protection and Safety Act (PUPS), which aimed to redefine as a “high volume retail breeder” anyone who sold more than 50 puppies in a one-year period, bringing many who bred dogs as a hobby under the USDA requirements for a puppy “dealer.”[5]

Neither of these pieces of legislation was enacted.[6] [7]

In addition, she was a signatory of Americans for Prosperity’s “No Climate Tax Pledge,” which declared opposition to “any legislation relating to climate change that includes a net increase in government revenue.”[8]

She was also co-sponsor of the Employment Non-Discrimination Act, which would have prohibited employers from considering sexual orientation or gender identity when hiring.[9]

After the 2010 Census, New York State underwent redistricting and lost seats in Congress. In 2012, Hayworth chose to run in the 18th district. She was defeated by challenger Sean Patrick Maloney (D-NY) by nearly 4 points. Maloney had received the endorsements of former President Bill Clinton,[10] the AFL-CIO labor union federation, Planned Parenthood and the New York State United Teachers, the New York affiliate of the two national teachers’ unions.[11]

Hayworth unsuccessfully attempted to regain her seat in 2014. During the campaign, Maloney (who is New York’s first openly gay congressman) accused Hayworth of discrimination against same-sex marriage, even though she had stated earlier she supported individual state’s rights to recognize same-sex unions. In response, Hayworth ran an ad featuring her son, who is openly gay.[12] Maloney won re-election.

In 2018 Hayworth was appointed by President Donald Trump to the President’s Council on Sports, Fitness and Nutrition.[13]

She is also the chairwoman of the board of Conservamerica, a Republican-aligned environmentalist advocacy organization.[14]