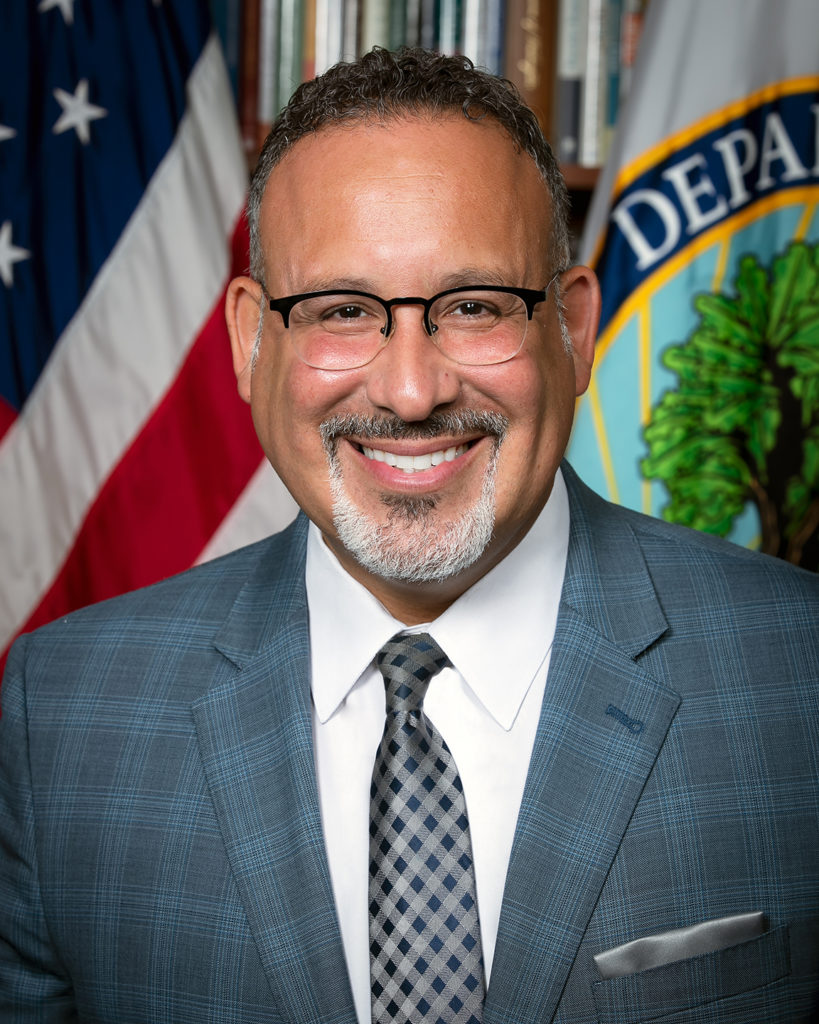 Secretary Cardona’s 2021 confirmation as Secretary of Education received support from left-of-center labor unions including the American Federation of Teachers (AFT) and the National Education Association (NEA). [2] Since taking office, Secretary Cardona has been criticized for allegedly allowing labor unions to have an influence over school reopening procedures during COVID-19 and for promoting the teaching of left-wing critical race theory in schools, including instruction on the controversial and partially debunked 1619 Project. [3] [4]

Early Life and Career in Education

Miguel Cardona was born to Puerto Rican parents and lived in Meriden, Connecticut, for almost his entire life. He grew up in public housing as a young child and struggled to speak English but eventually assimilated into Meriden where his father, a police officer, was known for building consensus between law enforcement and the Puerto Rican community. [5]

Secretary Cardona received his bachelor’s degree from Central Connecticut State University in 1997 then returned to Meriden as a 4th grade teacher at Hanover Elementary School. Five years later, he became the principal at Hanover, becoming the youngest principal in the state at age 28. While principal, Secretary Cardona oversaw the implementation of a bilingual education program. Eventually, he received his doctoral degree from the University of Connecticut, writing his dissertation on alleged inequalities in public education for ethnic minority students. [6]

Secretary Cardona became involved with politics in 2011 when the state of Connecticut appointed him to lead a task force charged with making recommendations to close the alleged achievement gap between white students and ethnic minorities. Cardona led the committee, which recommended a range of left-of-center policies including increased public housing, programs to address hunger, and increased social services to address the “systemic” conditions allegedly creating the gap. [7]

In 2013, Secretary Cardona moved out of his role as a school principal to become his school district’s performance and evaluation specialist. While in the position, he became a “bridge between the labor union and the district’s administration,” quickly developing a reputation for being sympathetic to left-of-center teachers’ unions. Secretary Cardona implemented a teacher evaluation program that caved to many common union demands, including limiting the role of student test scores in evaluating teacher performance and differentiating between teacher experience levels when making evaluations. [8] The left-of-center American Federation of Teachers (AFT) praised Secretary Cardona’s work on the proposal, calling it “a road map for union-district relations.” [9]

In August 2019, Connecticut Governor Ned Lamont (D) appointed Secretary Cardona to become the Commissioner of Education in Connecticut. Secretary Cardona’s appointment was controversial, with the appointment first being offered to Bloomfield Superintendent James Thompson before negotiations over salary caused the deal to crumble. [10] As Education Commissioner, Secretary Cardona placed an emphasis on closing alleged educational disparities between racial groups, claiming that the lack of English as a second language instruction in schools has disadvantaged ethnic minority students. [11]

During the COVID-19 pandemic, Secretary Cardona led changes to Connecticut education policy, implementing remote learning protocols and food programs for low-income students. He came under fire, primarily from the political left, for some of his COVID-19 policies, including his push to return to in-person instruction in schools and administer state exams during the pandemic. [12]

Perhaps most controversially, the Connecticut Department of Education under Cardona worked with the Connecticut state government to implement a mandate which required all Connecticut high schools to offer classes in African-American, Black, Puerto Rican, and Latino studies. Cardona supported the mandate, claiming that “identities matter” and citing the need for “culturally relevant content in classrooms.” [13] The curriculum incorporates critical race theory, a left-wing social movement to consider all historical and societal events through a racial lens. The curriculum requires students to spend at least three days discussing “systemic racism and the Black Lives Matter Movement,” requires that teachers teach that race is a social construct, and portrays racism as being foundational to the United States. [14]

In April 2021, emails obtained by a Freedom of Information Act (FOIA) request revealed that Secretary Cardona was concerned that teachers would not adopt instruction in critical race theory, with Secretary Cardona writing to a colleague that they needed “teachers behind this wave of our curriculum becoming more ‘woke.” [15]

In December 2020, speculation emerged that then-President-elect Joe Biden was eyeing then-Commissioner Cardona to become Secretary of Education. Up until that point, it was believed that President Biden would select either Lily Eskelsen Garcia, former president of the left-of-center National Education Association (NEA), or Randi Weingarten, longtime president of the AFT. President Biden had already announced a sweeping left-of-center education agenda at the time, including increased union power, increased federal funding for schools, and tripled support funding for schools in high-poverty areas. [16]

On December 22, 2020, President Biden announced his intention to nominate Secretary Cardona to the position of Secretary of Education, fulfilling a campaign promise to the NEA that the next Secretary of Education would be a public educator. [17] Secretary Cardona’s nomination was met with praise from the AFT, the NEA, and the National School Boards Association, though many classroom instructors criticized the choice, with one even calling it a “slap in the face.” Some instructors accused President Biden of breaking his campaign promise to nominate a teacher, given that Secretary Cardona had just five years of classroom experience before becoming a school administrator and a bureaucrat. [18]

In his first two months as Secretary of Education, Secretary Cardona has faced criticism for his stance on school reopening during the COVID-19 pandemic and his position in support of critical race theory. [26]

Nonetheless, Secretary Cardona was criticized along with schools refusing to re-open, despite an influx of federal taxpayer funding meant to keep students in classrooms. On May 10, 2021, criticism escalated when congressional Republicans wrote a letter to Secretary Cardona demanding answers as to whether left-of-center teachers unions had influenced the U.S. Department of Education’s reopening recommendations following reports that the Centers for Disease Control and Prevention (CDC) had consulted with teachers’ union leaders in designing its reopening guidelines. [28]

The New York Post revealed that the CDC had consulted with the AFT on the reopening recommendations. AFT officials then suggested changes to a draft of the recommendations, leading to the impression that the union had unfairly influenced the supposedly science-based guidelines. [29] U.S. Representatives Burgess Owens (R-UT) and Virginia Foxx (R-NC) wrote to Secretary Cardona requesting that he provide information about what contact the Department of Education had with the AFT and NEA in creating its reopening guidelines. [30]

As Secretary of Education, Secretary Cardona has attempted to increase instruction in critical race theory in schools across the country. On his first day in office, President Biden dissolved the 1776 Commission, a project put in place by the Trump administration to counter the narrative of the left-wing 1619 Project. The 1619 Project claims that the central event in American history was the importation of the first slaves and argues that modern America is completely dependent on the institution of slavery. [31]

In April 2021, the Department of Education under Secretary Cardona announced that it was seeking input on priorities for education in civics and American history to incorporate “racially, ethnically, culturally, and linguistically diverse perspectives” into education. The announcement specifically cited the 1619 Project and left-wing scholar Ibram X. Kendi as examples of its “priorities” for American history and civics education and called for increased instruction on “the consequences of slavery, and the significant contributions of Black Americans to our society.” [32] [33] The Department also set aside $5.3 million in grant funding for such projects. [34]

Despite the fact that the federal government has no direct control over setting curriculum in schools, the proposal sparked major controversy, with U.S. Senate Minority Leader Mitch McConnell (R-KY) and 36 other Republican U.S. Senators calling the proposed curriculum “activist indoctrination” that pushed “radical agendas that tear us apart.” [35] On May 20, 2021, 20 state attorneys general signed a letter to Secretary Cardona demanding an end to the policy and decrying critical race theory as “nothing more than ideology posing as history.” [36]

Secretary Cardona did not respond to the letters, instead dismissing concerns in an interview with Fox 5 Atlanta by saying he is “not overly concerned because the Education Department doesn’t dictate curriculum.” Secretary Cardona did not address the concern that grant funding would implicitly promote the teaching of critical race theory or mention the letter directly even when pressed. [37]