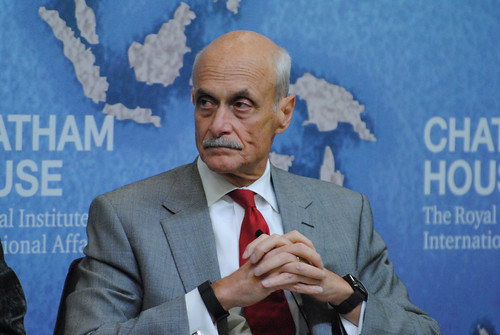 Michael Chertoff is an attorney and former government official. He was the U.S. Secretary of the Department of Homeland Security (DHS) from 2005 to 2009. [1]

Chertoff is a “Task Force Member” of the National Task Force on Election Crises, a nonprofit advocacy group which calls for “critical preventative reforms” to the U.S. election system. [2]

From 1979 to 1980, Chertoff served as a clerk to Supreme Court Justice William Brennan Jr. [3] He left this position to become an associate at Latham and Watkins in Washington, D.C. until 1983, after which he became the Assistant U.S. Attorney for the Southern District of New York until 1987. [4]

In 2000, Chertoff co-founded the Chertoff Group, a security advisory firm. [6] [7] It offers strategic counsel to corporate and governmental leaders on issues ranging from risk identification and prevention, “preparedness,” “response,” and “recovery.” It guides CEOs on risk management through its strategies. [8]

Chertoff was nominated as the Secretary of Homeland Security by President George W. Bush. As Secretary, Chertoff helped curtail the immigration of “would-be terrorists” into the U.S. He expanded the capabilities of the Federal Emergency Management Agency after Hurricane Katrina. [11] In this role Chertoff was leading a 218,000-person department and operating with a $50 billion budget. [12]

In May 2012, Chertoff became the chairman of the board of directors of BAE Systems. [13]

Chertoff is senior of counsel at Covington and Burling LLP, a position he started in March 2009. He is a member of its White-Collar Defense and Investigations practice group. [14] [15]

Advocacy Activities and Board Memberships

Chertoff co-chairs the Bipartisan Policy Center’s Immigration Task Force. [16] According to his BAE Systems profile, Chertoff sits on the board of directors of Noblis, Delta Risk, and Edgewood Networks, and on the advisory boards of Sonavation, Securonix, Reporty, V Armour, Lumina. Chertoff is also on the advisory boards of nonprofits such as Freedom House, a research organization funded by the U.S. government; American Action Forum, a right-of-center think tank that promotes Republican policies; Global Commission Stability in Cyberspace; and Global Privacy and Security By Design. [17] He is on the board of directors of the Atlantic Council. [18]

Chertoff is a “Task Force Member” of the National Task Force on Election Crises, a nonprofit advocacy group which calls for “critical preventative reforms” to the U.S. election system. The Task Force holds that President Donald Trump “badly damaged the perception of election legitimacy” and directly caused the Capitol riot on January 6, 2021. It also believes there is a widespread effort to disenfranchise voters, and that election administrators were key players in mitigating “a crisis” during the 2020 election. [19]

In 2010, Chertoff testified before Congress about DHS, advocating that the federal government purchase more cameras and sensors for surveillance purposes and promising that his team could get them the names of the right contractors from whom they could order said devices. [20] He also advocated the adoption of full-body scanners at airports to catch terroristic activity. [21] [22] In an interview with NPR, Chertoff admitted that his consultant firm the Chertoff Group represented clients that manufactured body scanners. [23]

In May 2014, Chertoff co-signed the foreword to a document published by the CNA Military Advisory Board entitled “National Security and the Accelerating Risks of Climate Change.” His foreword described the document as a “bipartisan call to action” to address the “threat” of climate change, especially its threats to “National Power” of the United States. [24]

In July 2020, Chertoff had an op-ed of his published in the New York Times expressing his concern that the Trump administration was “politicizing” the DHS by intervening in the Portland protests, and suggested that Trump might use the department to tamper with the 2020 presidential election. He also criticized the Trump administration DHS for allegedly “defying” the Supreme Court’s ruling on DACA by refusing to process migrants’ applications for legal status. He contrasted the Trump DHS to both the Bush and Obama administrations’ leadership of the agency, writing that they worked to keep it “apolitical and nonpartisan.” [26]

In August 2020, Chertoff went on a podcast hosted by Center for Strategic and International Studies (CSIS) staffers H. Andrew Schwartz and Scott Miller to discuss “security challenges” in the post-COVID world including “election security” and “countering disinformation.” [27]

Michael Chertoff was born on November 28, 1953, into a Jewish family from New Jersey. [28] Michael is married to Meryl Chertoff, an adjunct professor of law at Georgetown University. [29]