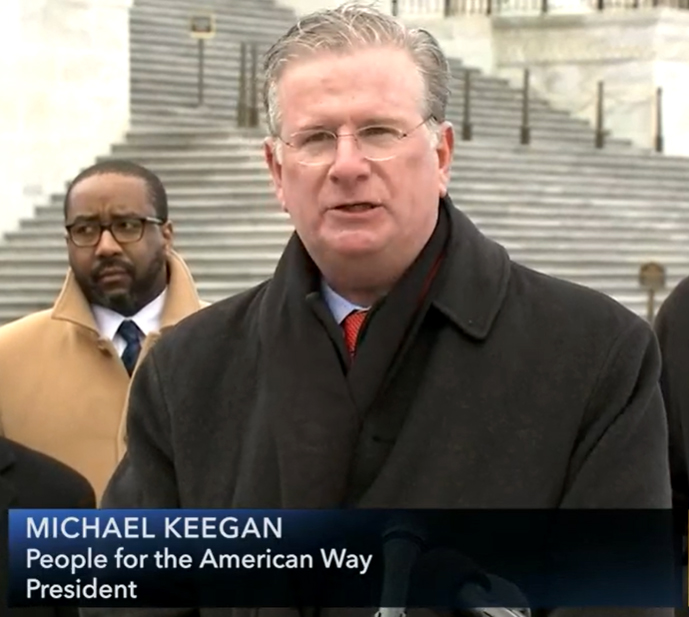 Michael Keegan is a left-wing activist who serves as president of People for the American Way (PFAW) a left-wing organization founded by the producer and writer Norman Lear. Keegan is well-known for frequently accusing Republicans and conservatives of racism and violence.

Keegan is also a businessman, investor, and philanthropist. Keegan has invested in the movie industry. He has also donated money and secured an endowment for Vanderbilt University.

Michael Keegan attended Vanderbilt University in Tennessee where he was elected president of the student body. He received his BA in American Studies in 1980.[1]

In that year he received a post graduate traveling fellowship allowing him to travel and study in 24 developing countries on four continents. The program was designed to allow a student to pursue an idea or issue they are impassioned about in the context of daily life in a global scenario. In 2003, the award was named after Keegan after he offered to fund the program and secure an endowment on a continual basis.[2]

After graduating Vanderbilt and completing his travels, Keegan attended Columbia University. There he received an MBA in International Business and Entertainment Management.[3]

After graduating Columbia, Keegan went to work in Hollywood. He worked with companies such as Columbia Pictures and Act III Communication. He received credit as the production manager for the 1992 movie Fried Green Tomatoes.[4] He ended his Hollywood career as the president of the Act III Theatres Circuit. While in the business sector, he also engaged in real estate investing.[5]

Keegan’s first taste of activism was in 1985 when he became a co-founder of the Gay & Lesbian Alliance Against Defamation (GLAAD). The organization was founded to protest what it claimed was the unfair portrayal of gays and lesbians in the media.[6]

In his role, he has taken to support left-wing activism and causes. He praised the Obama administration’s decision to support same-sex marriage in 2012.[8] He also claims credit for helping to defeat Virginia Republican gubernatorial candidate Ken Cuccinelli in 2013. [9]

After the election of Donald Trump as U.S. President, Keegan has taken every opportunity to tie Republicans and President Trump to the actions of violent extremists and racists. In March 2017, Keegan denounced Trump’s address to a joint session of Congress as “hate rebranded.” Keegan emailed, “What we saw was the same hate, the same bigotry, the same extremism, and the same insidious distortions of reality … but in a shiny new package now loaded onto a tele-prompter, couched in the kind of Orwellian doublespeak and slick marketing that could give Trump and Republicans a boost in popularity, despite their having the exact same agenda.”[10]

After the August 2017 white supremacist riot in Charlottesville, Virginia between white supremacists and left-wing activists that resulted in the death of a woman who was hit by a car, Keegan blamed Trump and the GOP for the violence. “When Donald Trump was elected president, many of us feared that his election would embolden radical extremists and white supremacists. Today shows that those concerns were entirely justified.” said Keegan in a press release.[11]

In June 2018, Keegan accused the GOP of a having a “neo-Nazi” problem. “Trump has encouraged bigotry and empowered extremists throughout his presidential run and his presidency, launching his campaign with pernicious attacks on Latino immigrants, proposing a “total and complete” ban on Muslim travel and implementing a version of it, and calling the violent white supremacists who killed a woman in Charlottesville “very fine people.” Is it any wonder that vocal white supremacists are looking for a home in his party?” Keegan wrote in a blog post.[12]

In October 2018, Keegan was still blaming conservatives and Republicans for violence. He blamed a series of bomb hoaxes targeting progressive leaders on “right-wing media” and Donald Trump.[13]

While Keegan was blaming nearly all acts of political violence on Republicans and conservatives, he was boosting the political aspirations of actor and PFAW board member Alec Baldwin. Baldwin has a history of violent and erratic behavior. Keegan called Baldwin a “thoughtful political analyst and very committed person through the movement, and [he] could not be more helpful now in electing great progressives in the states to start building a bench.”[14]