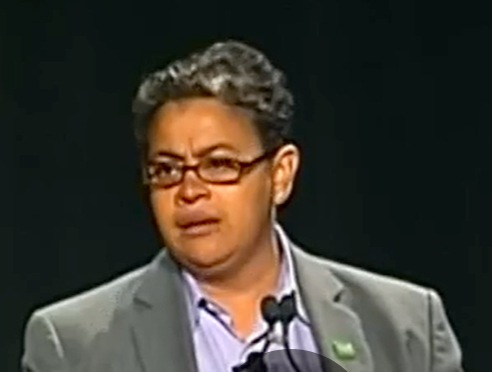 Melissa L. Bradley is an investor, philanthropist, and left-of-center political activist. She is the founder of 1863 Ventures, a business development fund that invests in whom it calls “black and brown entrepreneurs” so that the “New Majority” can “build wealth.” [1] She is also the founder and works as the managing partner of Ureeka and Sidecar Social Finance, two other development funds. [2]

Bradley was the chief executive officer of major left-of-center grantmaking organization Tides Foundation from November 2010 to April 2013. [3] She has extensive connections to major left-progressive philanthropists and donor networks.

Under President Bill Clinton (D), Bradley was appointed to a Financial Regulatory Affairs Fellowship position at the Department of Treasury to research welfare reform and financial lending to small enterprises. [4]

In 2003, Bradley was named a Soros Justice Fellow of Open Society Foundations for her work in economic development and investment opportunities for incarcerated people. [5] Open Society Foundations and its founder George Soros have long advocating for decreasing America’s incarceration rates and for increased leniency in sentencing laws and other criminal justice policies. [6]

From 2006 to 2008, she worked as the director of investment at CIT GAP Funds, a financial firm in Herndon, Virginia. She left CIT GAP to join environmentalist economic development firm Green for All for two years, working as the senior strategist of its Capital Access Program. In this role she formed the Energy Efficiency Opportunity Fund with nonprofit group Living Cities, helped create the Green Jobs Award Program with SFJ Ventures and Advisory Services, and formulated policy proposals to foster “green businesses.” [7]

Bradley also worked as the managing director of New Capitalist, a venture capital investor that worked with seed stage companies. [8] She later applied these business development experiences to create firms of her own for the purpose of fostering progressive initiatives and businesses. [9]

From 2012 to 2015, Bradley served as a presidential appointee to various positions under President Barack Obama (D). She worked as the chief strategy officer for the Corporation for National and Community Service, served at the Department of Education, and was appointed to Acting Director of the Social Innovation Fund, a White House economic development initiative. [10]

Bradley served as the senior adviser on environmental policy and investment strategies for the left-progressive giant Center for American Progress. She has also worked as a regular consultant for the W.K. Kellogg Foundation. [11]

She has held a number of fellowship, advisory, and other positions at many institutions, including the Reinvestment Fund, Association for Enterprise Opportunity, Robert Wood Johnson Foundation, Wallet AI, the Dell Center for Entrepreneurs, Brookings Institution, the National Advisory Council on Innovation and Entrepreneurship (NACIE), the District of Columbia’s Innovation and Technology Inclusion Council (ITIC), New Voices Foundation, New Voices Fund, the Halcyon Fund, Duke University, American University, Georgetown University, and the Woodhull Institute for Ethical Leadership. [12] [13] [14]

In November 2010, Bradley became the new CEO of the Tides Foundation when founder Drummond Pike stepped down from the position after 35 years. [15] The Tides Foundation is the grantmaking hub and donor-advised fund provider within the Tides Nexus of left-progressive groups. [16]

Bradley’s stated goal upon joining Tides was to make it “a world-class leader in social change,” which she claimed was “even more important now in light of the rise of intolerance and hatred across the count[r]y.” Her announcement included news about Tides’ recently created Civil Discourse Fund, which held a forum with speakers from the prominent left-of-center groups Alliance for Justice, Sojourners, and Media Matters. [17]

As CEO, Bradley worked to greatly expand the wealth and efficiency of the organization, doubling the Foundation’s donors, introducing new investment schemes, creating customer service options for its donor and activist clients, and secured the highest amount of financial contributions to the Foundation since 2000. [18]

During her time at Tides, Bradley denied that megadonors Bill Gates and George Soros had undue influence over the foundation’s work but affirmed that she and the organization had good rapport with them. “We certainly do work with the Gates Foundation, we do a lot of work with Open Society Foundations,” she said in one interview. [19]

In April 2013, it was announced that Bradley was departing from the organization and was being succeeded by interim CEO Gary Schwartz. [20]

Bradley has founded business development funds to direct donations and investment money into the hands of start-ups and small enterprises, particularly those owned by individuals from minority ethnic backgrounds. One such group is Venture DC/Project 500, an economic development firm that invests in “diverse entrepreneurs” so as to bridge “the literal and figurative innovation divide” in Washington, D.C. [21]

Another group of hers is 1863 Ventures, a business development organization that “accelerates New Majority entrepreneurs,” which is to say it trains what it calls “black and brown” business owners and invests in their companies. [22] Clients of 1863 Ventures “gain access” to the firm’s “brain trust” of experts representing several large participating corporations and institutions, including Northrop Grumman, Pfizer, CapitalOne, IBM, Pinterest, PayPal, Georgetown University, American University, and the University of Maryland. [23] The group has worked with several large corporate and private entities, including Amazon, Target, M&T Bank, Facebook, WeWork, Walmart, and the Surdna Foundation. [24]

She also founded and is involved with Sidecar Social Finance and Ureeka, investment groups that seek to “democratize economic opportunity.” [25] [26] [27]