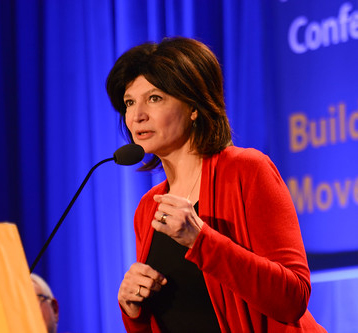 Lily Eskelsen Garcia is a teachers union activist and the former president of the National Education Association (NEA), the largest labor union in the United States. Eskelsen Garcia was considered a top contender for the Education Secretary in the administration of President-elect Joe Biden.

Eskelsen Garcia began her career as a lunch lady and then special education teaching assistant. After attaining an education degree, she worked as an elementary school teacher before being awarded Teacher of the Year in Utah. The award and other labor activism caught the attention of local labor unions, and Eskelsen Garcia was unexpectedly elected president of the Utah Education Association, the state-level chapter of the NEA. In 1996, Eskelsen Garcia got her first position at the NEA, and worked in a variety of roles until being elected its president in 2014. She served the maximum permitted two terms and stepped down from the position in September 2020.

Eskelsen Garcia was appointed to White House councils by Presidents Bill Clinton and Barack Obama, and unsuccessfully ran for Congress in 1998. She endorsed presidential candidate Hillary Clinton and personally campaigned for her in 2016, and endorsed President-elect Joe Biden in the 2020 Democratic primaries. Eskelsen Garcia was a strong opponent of President Donald Trump and particularly Education Secretary Betsy DeVos, whom she called “one of the most dangerous people” in President Trump’s cabinet. [1]

Eskelsen Garcia is a board member of the Economic Policy Institute, a think tank founded and funded by labor unions.

Lily Eskelsen Garcia was born in 1955 in Fort Hood, Texas. [2] Her father was an army veteran, and her mother was a Panamanian immigrant. During Eskelsen Garcia’s senior year, she met Ruel Eskelsen. After Eskelsen Garcia graduated from high school, the two married and moved to Colorado where Ruel was serving on an Army base. The two moved to Utah a few years later. Eskelsen Garcia and Ruel would have one natural-born son, Jeremy, and adopt another son, Jared. In 2011, Ruel died from suicide after a long battle with depression. [3]

In 2013, Eskelsen Garcia married Alberto Garcia, a Mexican artist whom Eskelsen Garcia had commissioned to create illustrations for a children’s book she was writing. [4]

In her mid-20s, Eskelsen Garcia used scholarships and government loans to attend the University of Utah with her husband, and she graduated with a degree in secondary education. Eskelsen Garcia was the first member of her family to attend college. She would later return to the University of Utah for a Master’s degree in instructional technology. [5][6]

While living in Colorado Springs after graduating from high school, Eskelsen Garcia got her first job as a lunch lady. A year later, she became an aide to a special-ed teacher. After moving to Utah, Eskelsen Garcia began attending college to get a degree to become a teacher. While at school, she and her husband worked as folk musicians. [7]

In 1989, Eskelsen Garcia was named Utah’s Teacher of the Year. To protest Gov. Norman Bangerter’s (R-UT) education budget restrictions, the National Education Association organized a rally at Liberty Park in Salt Lake City. Eskelsen Garcia was chosen as a key speaker and to play music to the crowd. [10]

In 1990, Eskelsen Garcia was elected president of the Utah Education Association, a state-level affiliate of the NEA, through a write-in election. [11] Eskelsen Garcia had little previous union experience, and her election was considered a surprise. [12] In this position, Eskelsen Garcia personally negotiated with Gov. Bangerter to implement class size reductions across Utah. She gained the governor’s support, and his administration implemented caps on a grade-by-grade basis, but was stopped by the legislature at grade four due to cost increases. [13] Eskelsen Garcia also started and served as the first presidents of the Children at Risk Foundation and Utah State Retirement System. [14]

In 1996, Eskelsen Garcia was elected to the nine-member NEA national council. She remained on the council until 2003, and worked part-time at Orchard Elementary School. [15]

In 1998, Eskelsen Garcia temporarily left the NEA to run for Congress. She returned shortly after losing the election. [16]

In 2002, Eskelsen Garcia was elected secretary-treasurer of the NEA and would serve two three-year terms. She moved to Washington, D.C., to work at the NEA’s headquarters. [18]

In 2008, Eskelsen Garcia was elected vice president of the NEA, and was reelected again in 2011. [19][20] While in office, Eskelsen Garcia worked with then-president Dennis Van Roekel to raise an additional $3 annual membership dues for NEA members. By 2014, the Great Public Schools Fund had amassed $60 million. [21]

Eskelsen Garcia was appointed by President Barack Obama to the White House Commission for Education Excellence for Hispanics. [22]

In 2014, Eskelsen Garcia was elected president of the NEA unopposed. She was the union’s first Hispanic president and its first female president since 1983. Eskelsen Garcia served the maximum two terms in the role and stepped down from office in 2020. [23]

Eskelsen Garcia opposes what she calls the “global education reform movement” (GERM), a focus on school competition, school vouchers, education privatization, and “corporate” education management. She considers President George W. Bush’s No Child Left Behind Act to be an example of this education reform approach. [24]

Eskelsen Garcia is a harsh critic of standardized testing in schools. She believes they create a needlessly competitive school environment and shift education to “obsessive” test preparation. [27]

Eskelsen Garcia opposes permitting teachers to be armed in school. [28]

Eskelsen Garcia supports the Common Core Standards Initiative, a curriculum restructuring generated under the auspices of the U.S. Department of Education in 2010. Eskelsen Garcia has said that the original Common Core plan was heavily revised by teacher union input, and its current form closely resembles her own preferred teaching style. [29]

In the summer of 2014, shortly before Eskelsen Garcia became president of the NEA, the NEA passed a resolution calling for the resignation of President Obama’s Education Secretary, Arne Duncan, for supposedly undermining public education and supporting standardized testing. Eskelsen Garcia’s support for the resolution is unknown, but she did not bring the petition up to President Obama when they met in September 2014 after her election to NEA president. Duncan ultimately did not resign. [30][31] Eskelsen Garcia later met with Duncan and said in an interview that he was not aggressive enough in his support for teacher union-aligned education approaches. [32]

Shortly after President Donald Trump’s election, Eskelsen Garcia said that the president’s comments on foreigners, Muslims, and transgender individuals had psychologically harmed children, and that she had personally comforted children named Mohammed, Juanita, and Alfredo, as well as transgender children who wanted to use school bathrooms. She told the National Press Club:[37]

We are facing a reckless, irresponsible administration that creates chaos and confusion — which is bad. But [Trump] does something worse: He creates fear in children. And that is unforgivable. For the first time in our country’s history — and I’ve talked to these teachers — we have had to comfort crying children because they are afraid of their president.

Eskelsen Garcia led labor union opposition against President Trump’s education secretary Betsy DeVos. Eskelsen Garcia characterized DeVos’s education views as being fundamentally anti-public school in favor of private schools and homeschooling. In 2017, Eskelsen Garcia said of DeVos and her supporters:[38] There is absolutely nothing that will stop these people from the dangerous agenda they have of profitize, privatize and … throw a middle-class child into the street saying, ‘Let them eat for-profit vouchers.’

In 2017, Eskelsen Garcia condemned President Trump’s budget plan which proposed cutting the Department of Education’s budget by $9.2 billion as a “wrecking ball” to public education. The cuts were never passed. [39]

On April 2, 2020, Eskelsen Garcia co-wrote an article with Jill Biden, wife of then-Democratic Presidential nominee presumptive Joe Biden, and American Federation of Teachers (AFT) president Randi Weingarten. The article gave recommendations to parents on how to assist their children in the online teaching process. [40]

In July 2020, President Trump endorsed resuming in-person schooling despite the continued COVID-19 pandemic. In response, Eskelsen Garcia condemned Trump for not emphasizing safety measures. On July 7, 2020, Eskelsen Garcia testified before Congress on guidelines for returning to school. A few days later, in an interview with “New Day,” Eskelsen Garcia stated that to consider in-person classes, schools would need personal safety equipment and cleaning procedures that meet Centers for Disease Control prevention standards. She added that these measures should be financed by the federal government as part of a COVID-19 financial relief program like the HEROES Act. [41]

Eskelsen Garcia was an early supporter of Joe Biden in the 2020 presidential election and is considered instrumental in pushing the NEA to endorse Biden in March during the Democratic primaries. Although Biden had the support of most union members, many members expressed dissatisfaction in the choice and pushed for more left-leaning candidates like Sen. Bernie Sanders (D-VT) and Sen. Elizabeth Warren (D-MA). [42]

After Biden won the Democratic primary, NEA voted to endorse Biden for president at the annual NEA conference, giving Biden the largest margin for a presidential endorsement in the organization’s history. [43] In her public statement, Eskelsen Garcia called the Biden-Harris ticket a “’dream team’ for our public schools and our students.” She praised Biden and Harris’s moral characters, their commitment to financially supporting public schools, and Biden’s promise to fire education secretary Betsy DeVos. [44]

After media outlets projected that Joe Biden had won the 2020 presidential election, Eskelsen Garcia was speculated as a potential pick for the next education secretary by the Washington Post and Politico. [46][47]

On November 9, Politico named Eskelsen Garcia as Biden’s most likely pick, followed by AFT president Randi Weingarten and Learning Policy Institute CEO Linda Darling-Hamond. Politico noted that Biden had promised to select a public school teacher for the post, and that he received much support from teacher unions, making Eskelsen Garcia a logical choice. [48] As runner-up, Weingarten was considered comparatively more radical and activist-oriented than Eskelsen Garcia, which would reduce her support from Republicans. [49] In addition, Eskelsen Garcia was an early supporter of Biden and was considered instrumental in gaining Biden the NEA’s endorsement in the Democratic primaries. [50]

Jill Biden has connections to both Eskelsen Garcia and Weingarten. In April 2020, Jill Biden co-wrote an article with the two union leaders on advice to parents to help their children attending school digitally from home. Jill Biden, who is employed as a teacher, is also a member of the NEA. [51]

In 1998, Eskelsen Garcia ran for Utah’s 2nd Congressional seat as a Democrat against Republican incumbent Rep. Merrill Cook (R-UT). Eskelsen Garcia earned 45% of the vote and lost the election. [52] Her defeat has been attributed to backfiring negative campaign ads. [53]

In November 2015, during a speech to left-of-center advocate group Campaign for America, Eskelsen Garcia said:[54]

We diversify our curriculum instruction to meet the personal individual needs of all of our students, the blind, the hearing impaired, the physically challenged, the gifted and talented, the chronically tarded [sic] and the medically annoying.

Eskelsen Garcia later apologized and clarified that she meant to say “chronically tardy” and refer to students who used their problems to “annoy” teachers. [55]