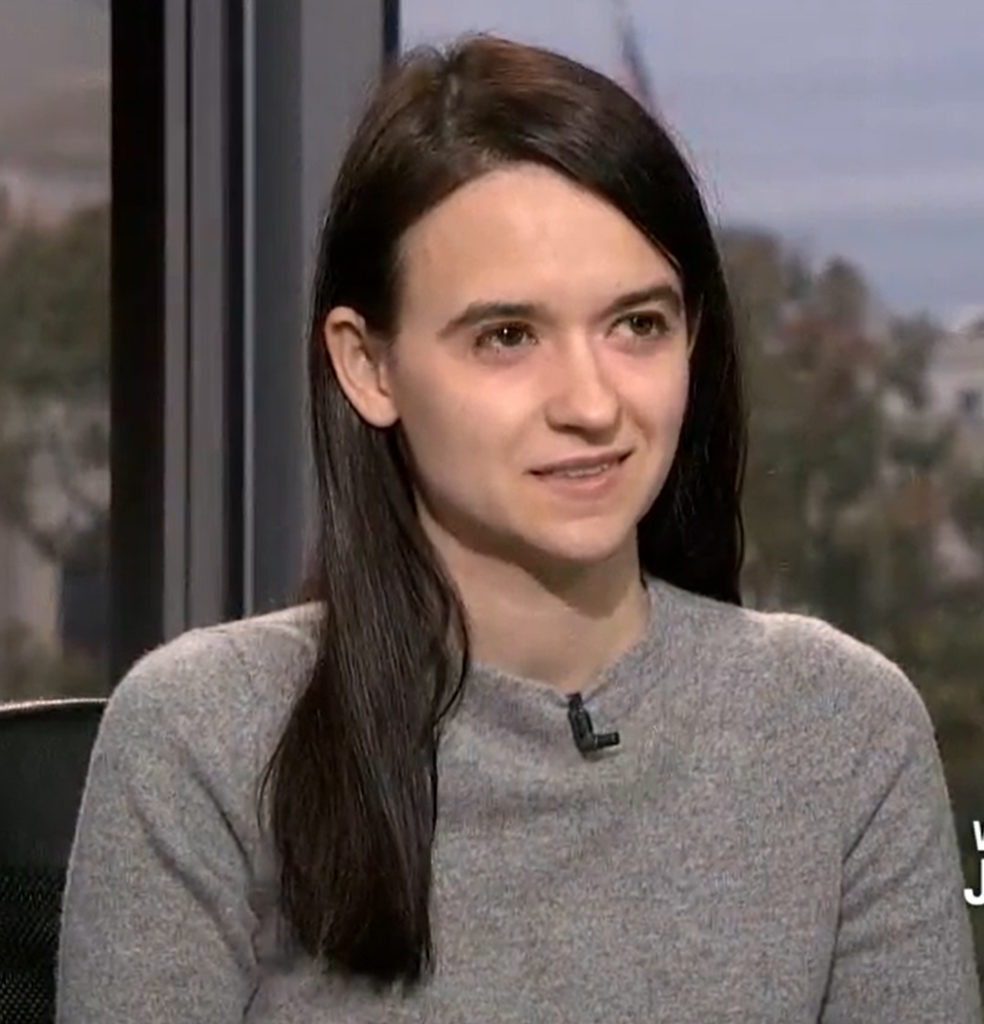 Leah Greenberg is the co-founder and co-executive director of the Indivisible Project, a left-of-center political nonprofit created in late 2016 as a response to the election of President Donald Trump.

Her husband is Ezra Levin, the other co-founder and co-executive director of the Indivisible Project.

Leah Greenberg was born and raised in Chevy Chase, Maryland. Her father, Mark, is a lawyer who once worked as a senior fellow with the left-of-center Center for American Progress. Her mother, Sara, is a retired lawyer. [1]

Greenberg briefly attended St. Andrews University, from 2004-2006. She later transferred to Carleton University, graduating in 2008 with a Bachelor of Arts degree in International Relations. [2] At Carleton, Greenberg met her future husband, Ezra Levin, at the group house where Levin lived with four friends from college. [3] The couple married in 2015. [4]

Following her graduation from Carleton University, Greenberg began her career as a government lobbyist for Humanity United, a nonprofit grantmaking organization that is part of eBay founder Pierre Omidyar’s left-leaning Omidyar Network. [5]

She then took a position as a congressional staffer for former U.S. Representative Tom Perriello (D-VA), a left-of-center politician whose policies were reportedly inspired by those of self-described democratic socialist U.S. Senator Bernie Sanders (D-VT). [6]

After a short stint on the hill, Greenberg worked in public affairs for the United States State Department, a position which she abandoned a few months later to pursue a 2013 Master’s degree in Law and Diplomacy at Tufts University. [7]

In 2014, Greenberg returned to the State Department as an advisor for its Quadrennial Diplomacy and Development Review. Once it was completed, she went back to Humanity United, working as its investment manager. [8] After four more years at Humanity United, she was hired as director of policy and research for Tom Perriello’s unsuccessful 2017 campaign for the Democratic nomination for Governor of Virginia. [9]

Greenberg founded the Indivisible Project after receiving a call from fellow Carleton University graduate, Sara Clough. Frustrated over the 2016 Presidential election of Donald Trump, Clough, Greenberg, and Levin met at an Austin, Texas pub on Thanksgiving. Levin and Greenberg used that conversation to motivate their decision to attempt to emulate the success of the Tea Party movement with a similar organization on the left. [10]

Towards that end, Levin and Greenberg began to draft what would become the first “playbook” for “stonewalling” the Trump presidency. [11] They sent the document among their connections on the hill, who also added advice. Shortly afterwards, on December 14, 2016, “Indivisible: A practical guide for resisting the Trump agenda,” was released on Twitter. [12]

The guide very quickly went viral and the couple founded the Indivisible Project nonprofit, taking on their current roles as co-executive directors. Greenberg’s Indivisible Project claims to have organized over 5,800 local groups. These local groups carry out the organization’s work of holding rallies in support of left-of-center causes and candidates. According to the organization’s 2018 tax filings, Greenberg made a salary of $58,211, working an average of 25 hours a week. [13]

Greenberg has contributed $676.52 to left-of-center causes in 2019-2020. Her donations were to ActBlue and to U.S. Senator Elizabeth Warren’s (D-MA) unsuccessful 2020 Democratic presidential primary campaign. She had not made any federally reported political contributions prior to those years. [14]