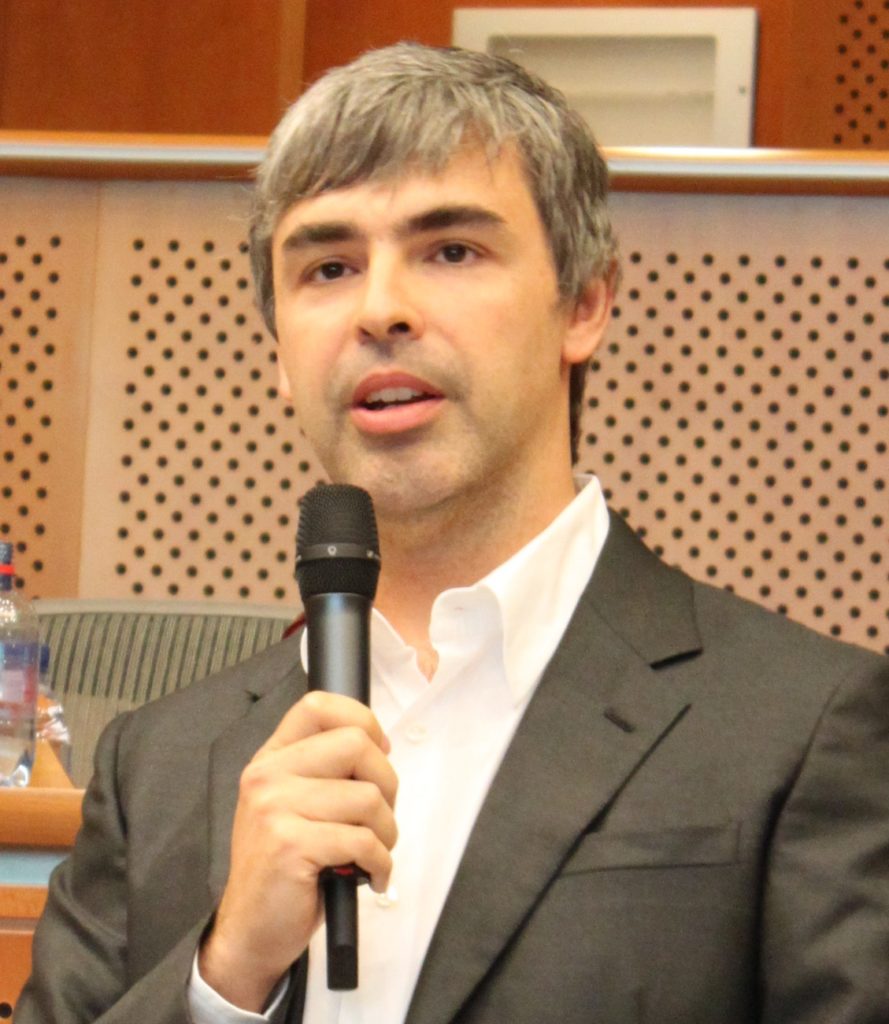 Lawrence “Larry” Page is the co-founder of Google, and current board member and largest shareholder of Google’s parent company, Alphabet. With a net worth of $64.8 billion as of September 2020, Page is the eighth-richest person in the world. [1]

Page has expressed left-of-center political views but is not known for political activism. He has funded California ballot measures: In 2006, he financially supported Proposition 87 to put a tax on California petroleum production to raise funds for environmentalist energy, and in 2008 he opposed Proposition 8, which eliminated state recognition of same-sex marriages in California. In interviews he has expressed optimism about the economic and social effects of automation and artificial intelligence. In 2018, Page was called to testify in front of the Senate Intelligence Committee on foreign influence but refused to attend.

Page suffers from partial vocal cord paralysis and has trouble speaking. He has not had a public speaking event since 2016 when he attended a tech summit at Trump Tower. [2] Google go-Founder Sergei Brin is more politically outspoken and has expressed strong opposition to President Donald Trump.

Page founded and operates the Carl Victor Page Memorial Foundation. Though the foundation donates hundreds of millions of dollars each year, the majority of its disbursements go to other funds controlled by Page rather than charitable causes.

Larry Page was born in East Lansing, Michigan. His parents, Carl and Gloria Page, were both professors of computer science at Michigan State University. Carl Page was considered a leading researcher in artificial intelligence. Larry Page has attributed their influence and home environment to his success with technology. [3]

Gloria Page is Jewish, but Larry did not receive a bar mitzvah, and was raised with no religious affiliation. [4] He does not currently identify with any religion. [5]

Page attended Okemos Montessori School as a child. In 1991, he graduated from East Lansing High School. [6] In 1995, Page graduated from the University of Michigan with a degree in computer engineering. [7] At college, Page proposed numerous technological changes to the university, including replacing the bus system with a driverless monorail containing separate cars for every rider. A college friend of Page described his as a perfectionist who could be “controlling and paranoid.” [8]

Page attended Stanford University for a master’s degree in computer science, and then enrolled for a Ph.D. in computer science. At Stanford, Page met Sergey Brin, a Russian immigrant and fellow Ph.D. student. The two worked together on research concerning search engine optimization. Their paper, “The Anatomy of a Large-Scale Hypertextual Web Search Engine,” was one of the most downloaded academic articles of its time. In 1996 and 1997, the two created the PageRank algorithm, which would eventually form the bedrock of Google search. [9]

In 1998, Larry Page and Sergei Brin established Google with a $1 million loan from friends and family. Page served as CEO and Brin as president. In contrast to other web search companies, Page opted to use custom-made smaller, denser servers for data mining. This allowed Page to use more server power per-square-foot in Google’s office. [10] By 2000, Google had the world’s largest search engine, covering approximately half of the internet’s 1 billion websites at the time. [11]

As CEO, Page was known for his intense, combative management style. He preferred to boil all decisions down to a binary choice with a high permissible degree of “collateral damage,” which often included disgruntled employees who had their ideas rejected. Page would often get into heated arguments with Brin and encouraged other executives to verbally spar over differences in opinion. In 2001, Page fired all the managers overseeing engineers at once on the grounds that competent engineers did not need managers. After months of resource misallocation and redundancy, new managers were hired. [12]

In March 2001, Page stepped down as CEO at the behest of Sequoia Capital, which offered a $50 million investment in Google. Page assumed the role of president of products while Eric Schmidt became CEO. Page and Brin retained majority ownership of the company. [14]

In 2005, Page led the acquisition of Android without Schmidt’s knowledge. Page focused much of his attention over the next three years on Android’s development. However, despite Page’s ownership stake and executive role at Google, his influence in the company waned as Schmidt’s management team increased its control. [16]

In 2011, Page returned to the CEO position while Schmidt became chairman of the board. Page consciously changed his management style to be less aggressive, with a “zero tolerance for fighting.” [17] Page cancelled 70 projects established under Schmidt and pushed the company towards more ambitious long-term planning. In a 2013 interview, Page said that he expected his employees to make products that were ten times better than the competition’s. Fortune’s Miguel Helft called Page “the most ambitious CEO in the universe.” [18][19]

In August 2011, Page spent $12.5 billion to purchase Motorola to acquire its cell phone technology patents as a defensive measure to protect Android from intellectual property lawsuits leveled by Microsoft and Apple. In a public blog post, Page accused the two companies of banding together for an anti-competitive assault on Google, and claims that the US Justice Department even blocked their purchase of a patent. [20] Google would sell Motorola three years later at a $9.5 billion loss. [21]

As CEO of Alphabet, Page disappeared from the public eye for long stretches of time and was considered an absentee manager. Bloomberg Businessweek published an article entitled, “Where in the World Is Larry Page?”[23]

Page’s absence from the public since 2015 might be due to his increasing speech problems stemming from the paralysis of his right vocal cord. Though the affliction began in 1999, it has worsened over time. Page has donated millions of dollars to research on the problem. [24]

In December 2019, Page and Brin stepped down as CEO and president of Alphabet. Pichai took over the CEO role. Both Page and Brin remain on Alphabet’s board and together are the controlling shareholders. [25]

Shortly after the announcement, Senator Elizabeth Warren (D-MA) Tweeted at Page that she and other lawmakers would continue to hold Page accountable for Google and Alphabet’s actions, regardless of his job title. [26]

In 2008, Page financed the creation of Singularity University, a business incubator and training program. The University finances companies which invest in long-range technologies, including many with transhumanist implications. [28]

In 1995, Larry Page met Lucinda Southworth, a biomedical informatics Ph.D. candidate at Stanford. Southworth would become a supermodel and actress. The two married in 2007 and have two children. [31]

Larry Page tends to express left-of-center views, but is generally considered non-political by the standards of a leader of a major technology company. [32] Page has never donated to any individual candidates, and aside from his contributions to a few state-level issues, Page has not donated to any national PACs as of September 2020. [33]

In 2006, Page contributed $1 million to support Proposition 87, which would enact an excise tax on petroleum production in California. The estimated $4 billion raised in revenue would be invested in alternative energy programs. Other backers included Larry David, Rob Reiner, Tom Hanks, and the spouse of then-Google CEO Eric Schmidt. The total amount spent supporting and opposing the bill reached $142 million, the most spent on any ballot measure in California history to that date. Proposition 87 failed to pass, with 54.6% voting “no.” [34][35]

In 2008, Mozilla CEO Brendan Eich resigned from his position due to popular pressure after it was revealed that he had donated $1,000 to support Proposition 8 in 2008. [37]

Sometime prior to 2010, Page and futurist Ray Kurzweil crafted a global renewable energy plan for the National Academy of Engineering premised on solar energy emerging as the dominant form of energy production in the future. [39]

In 2014, Page discussed some of his views regarding technology and economics with the Financial Times. Page believes that automation will likely replace 9 out 10 jobs in the future, but that the wealth produced by gains in efficiency will outweigh the costs of losing work, largely due to the dramatically decreasing prices of ordinary goods. He stated that with the right breakthroughs, most businesses will be 10 times more efficient. Page also claimed that housing prices should be less than 10% of current levels, but bad political policies are keeping prices high. [40]

Page commented that optimism for technology and entrepreneurialism in the United States is on the decline, but that even lower levels of optimism in Europe are responsible for many of the continent’s problems. [41]

At a general meeting with Google employees after the election of President Donald Trump, Page stood beside Brin as the latter lamented the election results, saying, “I find this election deeply offensive, and I know many of you do too. It’s a stressful time, and it conflicts with many of our values. I think it’s a good time to reflect on that.” The meeting was leaked to the right-wing website Breitbart.com and prompted accusations of anti-Republican bias at Google. [42]

In 2018, the Senate Intelligence Committee called on numerous technology industry leaders to testify on their investigations into Russian interference in the 2016 elections via social media platforms. Twitter CEO Jack Dorsey, Facebook COO Sheryl Sandberg, and Page were invited, but Page was the only one who refused to attend. Google CEO Sundar Pichai was subsequently invited, but also refused. Google stated that its lawyers had met with dozens of government officials since the 2016 election and did not feel it necessary to testify. Instead, Alphabet and Google published its written testimony for submission to the Committee, which detailed its security measures against foreign attackers and admitted no shortcomings. [43]

In 2014, Larry Page told Charlie Rose in an interview that after he died, he would rather leave his fortune to a technology company or CEO like Elon Musk than to a philanthropic charity. Page argued that visionary corporate ventures could do more good for humanity than current philanthropy. He cited Musk’s plans to colonize Mars “to back up humanity” as a worthy example. Some attendees claim that Page advocated for all people to leave their inheritances to corporations. [44]

In 2006, Page founded the Carl Victor Page Memorial Foundation, named after Larry’s late father. In 2017, the Foundation spent $181 million, received over $544 million in revenue, and had $2 billion in assets. Since 2017, Page has given $2 billion in personal wealth to the Foundation, mostly in the form of Google and Alphabet stock. [45]

According to Recode journalist Theodore Schleifer, Page’s Foundation spends little-to-nothing on philanthropy. At least from 2015-2017, the Foundation disbursed 5% of its endowment each year to meet regulatory requirements, but most of the funds went to donor-advised-funds controlled by Page. For instance, in 2017, the Foundation gave $1,000 to the American Cancer Society; $100,000 to New Venture Fund, a left-of-center fiscal sponsor for other foundations; and $800,000 to providing flu shots to citizens in Oakland. To reach the 5% threshold, the Foundation gave to two donor-advised-fund providers: $80 million to Schwab Charitable and $100 million to National Philanthropic Trust. [46]

Of the $2 billion Page gave to the Foundation by 2017, Schleifer only identified $21 million as going to charitable causes other than donor-advised fund accounts. Schleifer suggests that Page might be using this donation structure to conceal the ultimate recipients of his funds. [47]