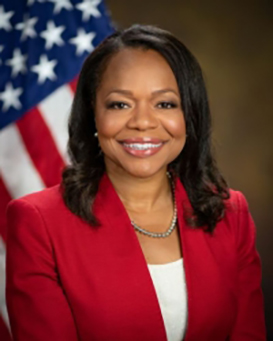 Kristen Clarke is a left-of-center activist lawyer currently serving as Assistant Attorney General for the U.S. Department of Justice Civil Rights Division in the Biden administration. Prior to joining the Biden administration, she worked as president and executive director of the Lawyers’ Committee for Civil Rights Under Law. Prior to taking that position, she worked for the NAACP Legal Defense and Education Fund, the U.S. Department of Justice and for the New York state Attorney General’s Office.

Kristen Clarke, since 2016, has worked as president and executive director of the Lawyers’ Committee for Civil Rights Under Law, a left-of-center advocacy group which also provides pro bono legal services in civil rights-related cases. [1]

From 2011 through 2015, Clarke worked for former New York state Attorney General Eric Schneiderman (D). She was the chief of Schneiderman’s Civil Rights Bureau, where she led oversight and enforcement on criminal justice, education, housing discrimination, fair lending, voting rights, immigration matters, gender equality, disability rights and LGBT issues. [2] Under Clarke, the bureau secured agreements with banks to address “redlining,” and worked with employers to address barriers to reentry for people with criminal backgrounds. She pushed police departments to reform policies, and secured agreements with retailers to tackle allegations of racial profiling. [3]

From 2006 through 2011, Clarke was co-director of the political participation group at the NAACP Legal Defense and Education Fund. [4]

When working from 2000 through 2006 at the U.S. Department of Justice Civil Rights Division, Clarke was prosecutor in the criminal division prosecuting police misconduct, police brutality, hate crimes and human trafficking cases. She later worked as a trial attorney for the voting rights division. [6]

At the NAACP Legal Defense Fund, Clarke focused primarily on election and voting issues. In 2009, she was part of the legal team that helped defend the Voting Rights Act in the Supreme Court case of Northwest Austin Municipal Utility District No. One v. Holder. [7]

The Justice Department’s federal observer program deploys about 1,000 federal officials around the country on election day to watch polling places for any problems or irregularities. Former Justice Department attorney J. Christian Adams said that while Clarke worked for the NAACP, she opposed allowing federal prosecutors to be among election observers. Clarke claimed that minority voters would avoid voting if prosecutors were present. [8]

Clarke led the Lawyers’ Committee litigation against the election integrity policies pushed by Georgia Secretary of State Brian Kemp, a Republican who defeated Democrat Stacey Abrams in the 2018 governor’s race. [10]

With the Lawyers’ Committee, Clarke has been active in pushing social media companies such as Facebook and Twitter in blocking so-called “hate speech.” She testified before the House Judiciary Committee on the topic in April 2019.

In 2016, Clarke alleged that Airbnb was enabling racial discrimination—in part because of its decentralized structure. She drew on her own experiences when trying to book Airbnb lodging in Argentina, claiming took four requests before she could get a vacancy. She also cited a study that indicated discrimination with the company. [12]

Clarke called for Airbnb to audit hosts suspected of discrimination, to ban hosts found guilty of discriminating, and to stop having users display their picture and name when booking. [13]