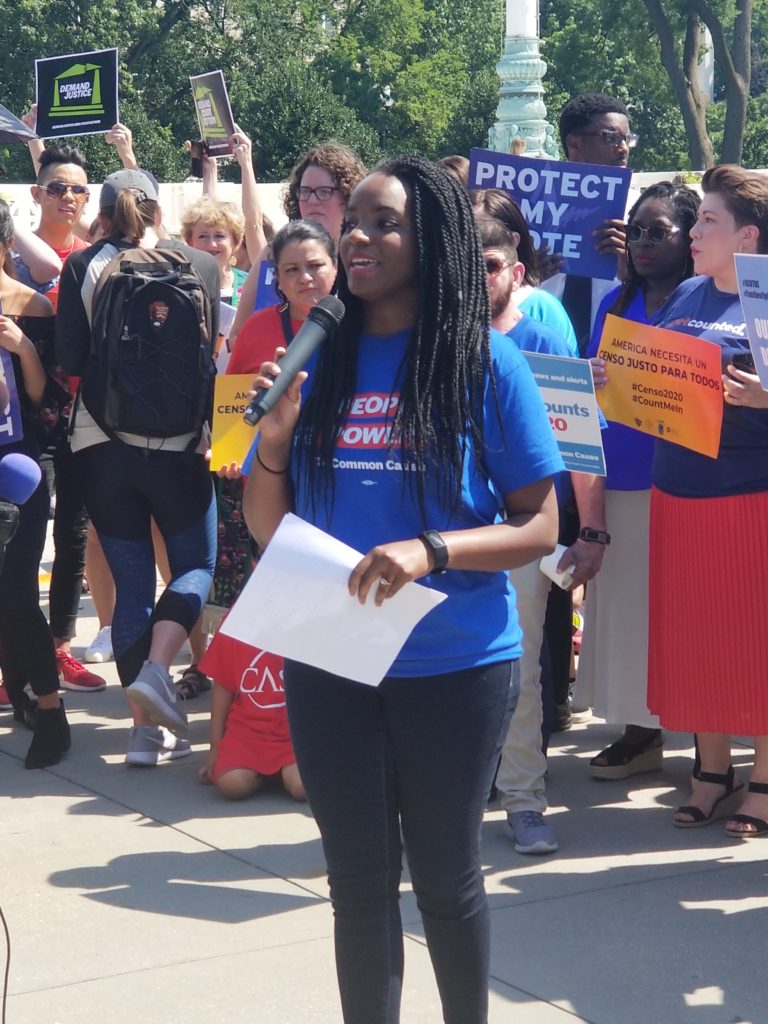 Keshia Morris is the census and “mass incarceration” project manager at left-of-center advocacy group Common Cause. [1] Morris leads Common Cause’s 2020 Census campaign, in addition to leading initiatives focused on promoting left-of-center criminal justice policies. [2] Morris began working with Common Cause in January of 2016, after working as a success coach for disabled adults. [3]

Aside from her work at Common Cause, Morris has supported the political left more broadly. In 2017, Morris participated in the Women’s March on Washington D.C. to protest the election of President Donald Trump. [4] When interviewed by the Washington Blade during the march, Morris claimed that the march was a form of “resistance of hateful rhetoric” and told reporters that she was “marching today to stand in solidarity with every person across the United States that feels like the Trump presidency disqualifies them from the American dream.” [5]

In 2019, Common Cause launched a Census campaign after alleging that “partisan politics have launched a systematic assault on the fairness and accuracy of the 2020 Census.” [6] Common Cause’s census initiative, led by Keshia Morris, alleges that the Trump administration tried to underfund the census, tried to place an official defending “racial gerrymandering” in control of the census, and attempted to add a “potentially intimidating” citizenship question to the form. [7] Morris and Common Cause have started an initiative to push legislators to lead outreach efforts to their constituents to ensure that they complete the census, in addition to calling on U.S. representatives to pass legislation to amplify public education efforts surrounding the census. [8] [9]

Morris has taken to several media outlets to push left-of-center census positions. In March 2018, the Census Bureau announced that the 2020 census would ask every American household to record which members of their family have United States citizenship, acting on a request from the Department of Justice (DOJ). [10] The DOJ argued that in order to enforce the Voting Rights Act, the Department must know where eligible voters live, which requires the ability to distinguish citizens from noncitizens. [11] According to the DOJ, a lack of citizenship data could dilute the power of voters of color if nonvoters were counted in the creation of a district. [12]

Morris argued the opposite, claiming that the Trump administration recommended the addition of a citizenship question to “further weaken the power and voices of people of color.” [13] Morris went on to argue that “people of color already are discounted” from the political process through procedures like “gerrymandering and voter suppression tactics.” [14] Morris further asserted that the citizenship question was designed to “drive down immigrant participation in the process” because it came from an administration which has tried to “divide our country based on race.” [15]

Morris also claimed that the addition of a citizenship question would threaten the constitutional validity of the census, which calls for an “actual enumeration” of all people living in the United States, regardless of citizenship status. [16]

Just hours after the announcement of the citizenship question, California and 13 other states filed a lawsuit against the Census Bureau. [17] In June of 2019, the lawsuit reached the United States Supreme Court, which blocked the Trump administration’s plan to include a citizenship question. [18]

In March of 2020, President Donald Trump’s reelection campaign released a series of Facebook advertisements asking users to respond to a “census,” which the advertisements made clear was a campaign survey for President Trump’s reelection campaign with language encouraging respondents to “Help Trump Win.” [19] Though the advertisements clearly denoted that the survey results were “ESSENTIAL to our team’s 2020 campaign strategy” and were labeled as “Paid for by the Trump Make America Great Again Committee,” Morris alleged that the ads were meant to confuse people into believing that they were filling out the official United States census. [20]

In an interview with Vox, Morris claimed that the ads were “deceptive,” even though they clearly affiliated themselves with the Trump campaign. [21] Morris went onto claim that the sheer use of the word “census” was misleading at a time when the United States Census was being sent to American households, and alleged that the use of clip-art scrolls labeled as “2020 Census” next to a sign that says “Help Shape President Trump’s Winning” was a “deceptive tactic.” [22]

In her role as Common Cause’s “mass incarceration” project manager, Morris has repeatedly argued in favor of reinstating voting rights for convicted felons. [24] In a 2018 opinion piece co-authored by Morris, Morris argued that there is a “political drive” supporting mass incarceration in the United States that “fundamentally undermine[s] the legitimacy and integrity of our democracy.” [25] Morris claimed that the “epidemic of mass incarceration” is brought about by special interest groups, partisanship, and redistricting squabbles. [26]

Morris went on to argue that denying voting rights to convicted felons “robs those who are the most deeply affected by the system of a voice in changing it.” [27] Morris further claimed that so-called “prison gerrymandering,” the process by which inmates are counted in the districts of their prisons rather than home communities, gives disproportionate power to white, rural districts. [28]

Morris has argued that states should begin to count inmates as residents of their home districts and restore voting rights to those convicted of felonies. [29]