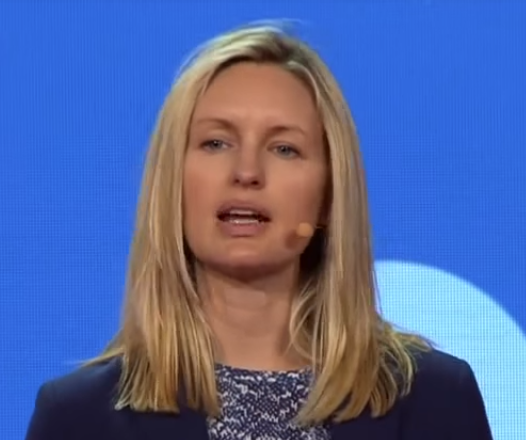 Kathryn Murdoch is a left-leaning political activist and donor to liberal causes. Kathryn is the wife of James Murdoch, the liberal-leaning son of News Corporation co-founder Rupert. With her husband she is co-founder and president of the Quadrivium Foundation; she sits on the boards of a number of left-of-center advocacy groups, including Unite America, where she serves as co-chair and is a major donor. [1]

Kathryn Murdoch was formerly the director of strategy and communications for the Clinton Climate Initiative, [2] and donated heavily to the Hillary Victory Fund, a joint fundraising committee for Hillary Clinton’s 2016 presidential campaign and the Democratic National Committee. [3]

Murdoch began her work in environmentalist climate change advocacy in 2006, after hearing Al Gore speak about his book An Inconvenient Truth. [4] She worked at the Clinton Climate Initiative as the director of strategy and communications from 2006 until 2011. [5]

Murdoch claims to be “an advocate for improving science communications,” and sits on the boards of Climate Central, Climate Leadership Council (CLC), and the Environmental Defense Fund (EDF). In early 2020, Murdoch, along with her husband James Murdoch, criticized the Murdoch family for its role criticizing environmentalist positions on climate change through its media outlets, which include Fox News. [6]

In 2019, Murdoch contributed the maximum amount allowed to the 2020 presidential campaigns of former South Bend Mayor Pete Buttigieg (D) and Washington Gov. Jay Inslee (D). [7] Inslee had made climate change the top issue of his campaign. [8]

Murdoch is the co-chair of the board of Unite America, a left-of-center PAC, to which she donated nearly $4 million in 2019. [9] While Murdoch claims to have a bipartisan approach, and Unite America claims to support “candidates on both sides” of the partisan divide, the PAC invests in left-leaning groups whose efforts include promoting ranked-choice voting, redistricting, and automatic voter registration. [10]

In 2016, Murdoch made contributions to numerous state democratic parties, totaling nearly half a million dollars, noting “Hillary Victory Fund” on the memo line of each of these donations. Murdoch also made a substantial donation to the Democratic National Committee (DNC), with a second donation to the DNC for $2,700 (the maximum donation allowed to a campaign), also noting “Hillary Victory Fund” on the memo line. In addition to this, Murdoch twice contributed the maximum amount allowed directly to Hillary Clinton’s 2016 presidential campaign, and contributed nearly $85,000 directly to the Hillary Victory Fund. [13]

The Hillary Victory Fund was established as a joint fundraising committee between the Democratic National Committee, Clinton’s 2016 presidential campaign, and 32 state party committees. [14]

In 2019, Kathryn’s husband James donated $100 million to the Quadrivium Foundation, which she co-founded with him, in the form of shares in the Walt Disney Corporation. [15] This donation was made on the same day Disney bought 21st Century Fox and its assets such as 20th Century Studios. [16] [17] Quadrivium then went on to give over $25 million in grants to left-of-center organizations like the Environmental Defense Fund, to whom Quadrivium gave $11 million in grants in the 2019 fiscal year. [18] According to a CNBC article, Quadrivium committed to giving over $43 million to “climate change related” groups. [19] In 2019, Quadrivium made over $38 million worth of donations to various election-related organizations, some of which were dedicated to opposing voting restrictions. [20] [21]

Kathryn Murdoch is a member of the Aspen Institute’s Commission on Information Disorder, which was created to track right-wing “disinformation.” [22] Other prominent members of the commission include Prince Harry, who has spoken out against the First Amendment in interviews, and Katie Couric, who was sued for libel by the Virginia Citizens’ Defense League for deceptively editing a video in which she interviewed members about Second Amendment issues. [23]