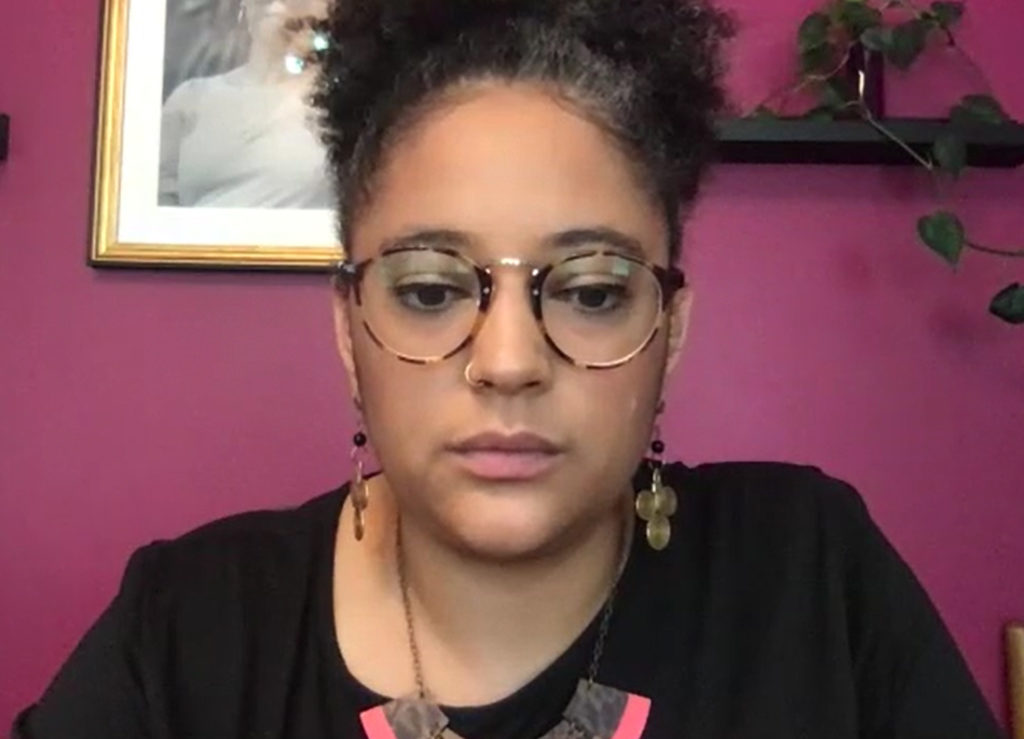 Kandace Montgomery is a left-wing anti-police organizer based out of Minneapolis. She is a co-founder and leading member of the Black Visions Collective (BVC) activist group, and she helped found Reclaim the Block (RTB), which has lobbied the Minneapolis City Council to defund law enforcement. She has previously worked with other left-of-center and radical-left organizations and is a leader in the Black Lives Matter (BLM) movement. [1]

As a leading member of BVC, Montgomery has taken part in high-profile public demonstrations and acts of civil disobedience in Minneapolis. She became a prominent figure in the protests and riots following the death of George Floyd in police custody after she confronted Minneapolis Mayor Jacob Frey (D) about defunding police. [2]

Montgomery graduated from the University of Massachusetts, Amherst in 2012 with a Bachelor of Science in Public Health. During her time in college, she completed an internship with Hampshire College’s Civil Liberties and Public Policy Project, an education initiative for abortion and social justice activists. [3] She continues to serve as a facilitator with the UMass Alliance for Community Transformation, the university anthropology department’s social justice activism initiative. Montgomery identifies as queer. [4]

While in college, Montgomery worked for various activist causes, including voter registration. In 2013, she accepted a job with TakeAction Minnesota and moved to Minneapolis to work on reducing voting obstacles for people with criminal records. Following the initial Black Lives Matter protests and riots after a police officer killed Michael Brown in 2014, she helped start BLM Minneapolis. When the organization lost momentum due to insufficient funding and infighting over priorities, she moved on to work for the BLM Global Network. Several years later, she returned to activism in Minneapolis and started building Black Visions Collective to conduct anti-police activism. [5]

As a co-founder of Black Lives Matter Minneapolis, Montgomery has participated in numerous protests against alleged police misconduct. In December 2014, she was part of a rally at a Mall of America that resulted in 25 arrests and 17 trespassing charges. Montgomery was one of those arrested, but had her charges dropped after the American Civil Liberties Union came to her legal defense. [6] In December 2015, BLM Minneapolis repeated the mall protest and caused additional disruptions at light rail stations and Minneapolis-St. Paul International Airport. The mall barred Montgomery and several other activist leaders from demonstrating on its property, and police arrested 13 protesters on trespassing, disorderly conduct, and other charges. The disruptions forced around 80 stores at the mall to close. [7]

In November 2015, BLM Minneapolis set up a protest camp outside a police station after police killed Jamar Clark. Montgomery was present at the camp as an organizer. Camp residents stockpiled supplies and set fires in the street. Police raided the camp after two weeks, arresting eight of the protesters and removing the rest. [8]

Montgomery spent several years working as an organizer for the BLM Global Network. BLM Global Network has ties to radical extremists: One its founders is Alicia Garza, a self-identified Marxist activist who has faced criticism for promoting extremist ideologies and actions. [9] Until July 2020, the group’s fiscal sponsor was Thousand Currents, a left-of-center group with a board member, Susan Rosenberg, who is a convicted domestic terrorist and a former member of the May 19th Communist Organization. [10] The BLM Global Network’s new fiscal sponsor is the Tides Foundation, a left-of-center donor group. [11]

Montgomery is the director of Black Visions Collective and co-founded the organization in 2017 with other former Black Lives Matter Minneapolis organizers. [12] The group held two anti-law enforcement protests in 2018. In February, BVC led around 100 people to blockade a light rail station on Super Bowl Sunday. Police removed 17 protesters and issued them citations, but made no arrests. [13] In June, BVC leaders – most of whom identify as queer – protested the Minneapolis Pride Parade, opposing the event welcoming police officers. The disruption led to arguments with parade attendees, who accused the protesters of being “divisive” and “disrespectful.” In turn, BVC activist Ahni Ali claimed that the crowd shouted “racist stuff” at the demonstrators. [14]

Throughout the protests that started in May 2020 after George Floyd died in police custody, the group has pressured the Minneapolis City Council to defund the city police department. When council members did not respond to BVC demands within 24 hours, activists targeted their homes, planting dozens of cardboard gravestones in their front yards. [15] Montgomery has defended the rioting, looting, and arson that occurred during the protests, stating that she would “honor and respect the ways in which my community has decided to grieve.” [16]

BVC regularly shares extremist content on social media. In August 2020, the group’s Twitter account retweeted a memorial post for Black Panthers who attempted to break out of prison in 1971. The group also shared a live video feed from Unicorn Riot, an anarchist- and reportedly Antifa-affiliated media source. [17]

The BVC website does not identify Montgomery or any other individual as a member of leadership. [18]  TakeAction Minnesota is BVC’s fiscal sponsor. [19]

Black Lives Matter activists in Minneapolis formed Reclaim the Block in 2018 to lobby the city council to defund the city’s police department and replace it with ‘community-led safety initiatives.” [20] The group supports defunding the city police department and replacing it with “community-led safety initiatives.” RTB opposes policing of any kind and does not support measures that stop short of removing the police, such as increased regulation or public engagement. [21]

Montgomery is an RTB organizer, and acknowledges that “there is a lot of overlap” between different anti-police organizations in Minneapolis. [22] In December 2018, the group pressured the City Council to divert $1.1 million from the police department budget towards “community-driven public safety programs.” Montgomery called the decision “really great” and “one step in the right direction.” [23]

As is the case with BVC, RTB’s website does not identify any leaders. The website features an extensive list of resources for anti-police activists. [24] In August 2020, RTB announced that it was not taking donations due to a massive influx of contributions over the preceding months. [25]

Montgomery is a co-owner of the Purple Palace Project, which provides housing to queer and transgender people of racial minority backgrounds. [26]

In March 2019, Montgomery launched a GoFundMe campaign to raise money for a trip to Brazil to attend a “Decolonial Black Feminist School.” [27] One of the organizers was former Communist Party USA member Angela Davis, who is on the FBI’s Top Ten Most Wanted List. [28]

Two weeks after the death of George Floyd, Montgomery led a march to the apartment of Minneapolis Mayor Jacob Frey (D) to call for defunding the city police department. When Frey did not agree to the demand, she yelled him to “get the f— out of here” and led the demonstrators in chanting “go home, Jacob, go home.” [29]

In July, Black Visions Collective hosted a rally pressuring Minneapolis City Council members to vote to disband the police department. Montgomery called the decision a “critical step in actually being able to abolish the police.” Some Black community leaders called the decision “immature” and “dangerous,” and said they were not consulted on the decision. [30]

Montgomery’s organizations, BVC and RTB, have received a combined $30 million in donations since anti-police protests erupted in May 2020. Some activists have alleged a lack of transparency from the groups about where the money came from and how it would be used. During a meeting intended to address the concerns, Montgomery apologized for not distributing funds quickly enough to cover protective equipment and bail money for protesters. The groups’ leaders said that it would begin distributing money in $2,000 increments, and later announced a $3.1 million grant fund, but some activists called the meeting “performance” and “censorish.” [31]