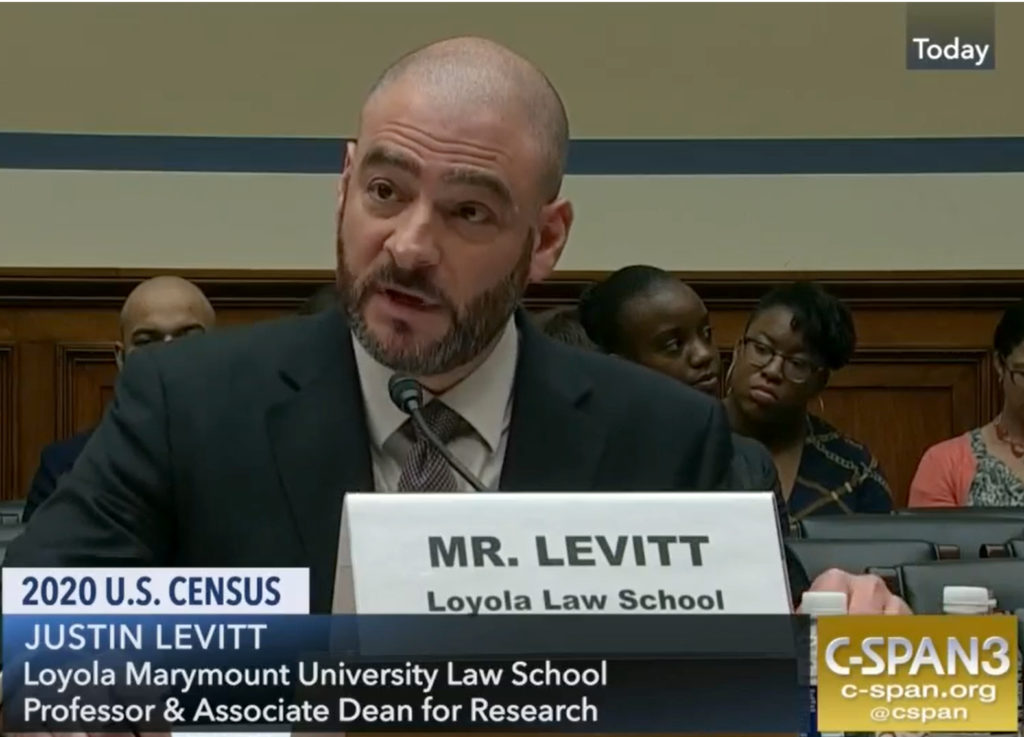 Justin Levitt is a left-of-center constitutional and voting scholar who currently works as President Joe Biden’s Senior Policy Advisor for Democracy and Voting Rights. Levitt previously worked in the U.S. Department of Justice’s Civil Rights Division in the Obama administration. [1]

Levitt is best known for a 2014 study in which he claimed that there were only 31 instances of impersonation-based voter fraud in the United States between 2000 and 2014. Levitt opposes election integrity laws, especially voter identification requirements, alleging that the fraud they are intended to prevent is rare. [2]

After earning a degree in visual propaganda from Harvard University, Justin Levitt worked at McKinsey and Company as a business analyst from 1995 until 1997. He then went back to Harvard, where he received his Master’s of Public Administration and a law degree specializing in conflict resolution. While still in law school, Levitt interned at the Office of War Crimes in the U.S. Department of State. [3]

In 2002, Levitt became a law clerk for Judge Stephen Reinhardt of the U.S. Court of Appeals for the Ninth Circuit. The following year, Levitt joined retired General Wesley Clark’s campaign for the 2004 Democratic presidential nomination as director of strategic targeting. [4]

In 2004, Levitt became a counsellor at America Coming Together, a liberal PAC established to oppose then-President George W. Bush with funding from George Soros and other Democratic mega-donors. The following year, Levitt became a counsellor at the William J. Brennan Center for Justice, a left-of-center advocacy group that supports judicial activism. In 2008, Levitt spent five months working at the Democratic National Committee (DNC) as national voter protection counsel. He then returned to the Brennan Center for another year and a half. [5]

In 2010, Levitt began working at Loyola University, initially as an associate professor of law before becoming a full professor in 2014. He held his position at Loyola until 2021. [6]

In 2015, Levitt took a two-year leave-of-absence from Loyola to work as Deputy Attorney General in the U.S. Department of Justice Civil Rights Division during the Obama administration. [7]

On April 19, 2021, Levitt was appointed Senior Policy Advisor for Democracy and Voting Rights by President Joe Biden. Levitt will be responsible for advising President Biden on election law and voter access. [8]

In early 2021, Justin Levitt joined a legal team run by the law firm Strumwasser and Woocher, which applied to serve as counsel to the California Citizens Redistricting Commission, an independent commission set up under California state law to draw congressional and state legislative districts. Levitt was dropped from the team for undisclosed reasons, and after he was removed from the team, the Commission hired Strumwasser and Woocher. [9]

Justin Levitt runs the blog All About Redistricting which tracks state-level legislative redistricting efforts. The blog was designed by the GreenInfo Network and receives funding from the left-of-center Ford Foundation and the Fair Representation in Redistricting Initiative. [10]

In 2017, Levitt published “Quick and Dirty: The New Misreading of the Voting Rights Act.” The journal article argued that many states have purposefully used a simplified interpretation of the 1965 Voting Rights Act, which was meant to prohibit racial discrimination in voting, to permit subtle racial discrimination in order to limit voting access for demographic groups which traditionally support Democrats. [11]

In 2007, Levitt published “The Truth About Voter Fraud” for the William J. Brennan Center for Justice. The study claimed that the prevalence of voter fraud has been exaggerated and has been used as a pretext for restrictions on voter access for particular parties and candidates. Using Wisconsin in the 2004 election as a case study, Levitt claimed that there were just 7 instances of voter fraud out of nearly 3 million votes cast in the state. [13]

Justin Levitt has made 11 donations to political candidates, all of either $250 or $500. In both 2008 and 2012, Levitt donated to President Barack Obama’s campaigns. Levitt made most of his donations in the 2020 election cycle, giving to U.S. Representative Adam Schiff (D-CA) and U.S. Senators Raphael Warnock (D-GA) and Jon Ossoff (D-GA). Though Levitt has mostly donated to Democrats, he also gave to U.S. Senator Mitt Romney (R-UT) and then-U.S. Representative Justin Amash (Libertarian-MI) in 2020. [14]