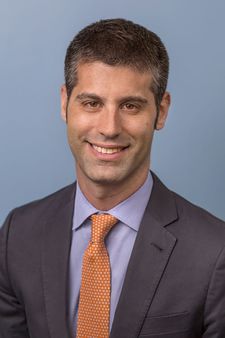 Jonathan Rosen is a Democratic Party political consultant and close political ally of New York Mayor Bill de Blasio (D) who works as principal and co-founder of BerlinRosen, a campaign consulting and public affairs firm. Rosen is charged with the firm’s “strategic communications and media relations practice.”[1] He and his business partner, co-founder Valerie Berlin, came to notoriety after their client Bill de Blasio won the New York City mayoral election in 2013; the firm was later implicated and investigated for involvement in a number of de Blasio’s public scandals.

Rosen began his political career as a summer intern at a New York City law firm. While working on a campaign for then-New York State Senator Eric Schneiderman (D-Manhattan), he met his future business partner, Valerie Berlin, then working as Schneiderman’s chief of staff.[2]

After working on a number of other campaigns, including then-Public Advocate Mark Green’s Democratic campaign for New York City mayor in 2001 and a stint at directing the New York State Democratic Senate Campaign Committee, Rosen co-founded BerlinRosen, a political consulting firm, with Valerie Berlin in 2005.[3] The two-person firm has since grown to nearly 100 employees.[4] One of the firm’s first projects was a $200,000 ad campaign designed to attack Republicans running for the New York State Senate. The campaign was created in support of Democrats such as now-convicted former state Assembly Speaker Sheldon Silver (D-Manhattan) and future Governor Eliot Spitzer, who would also be forced to resign after a corruption scandal.[5] In 2008, BerlinRosen helped Democrats regain full control of the state government for the first time in 40 years.[6]

BerlinRosen gained widespread attention in 2013 after their client, Bill de Blasio, was elected mayor of New York City. Jonathan Rosen attended 20 meetings with the mayor in 2014 alone, and personally handled a number of the public scandals that soon followed.[7]

Emails between Rosen and de Blasio suggest that a number of BerlinRosen’s other clients were given access to City Hall – most notably the Barclays Center, Coalition for the Homeless, and Forest City Ratner Companies. In other cases, Rosen allegedly worked against his own clients for the benefit of City Hall. In 2014, Rosen informed a member of de Blasio’s staff that one of his clients, Communities United for Police Reform, planned to begin a campaign in opposition to the city’s “Broken Windows” law enforcement strategy. Watchdogs alleged that Rosen had created a conflict of interest or may have acted as a lobbyist without the proper license.[8]

When these scandals first came to light, de Blasio attempted to disguise his dealings with Jonathan Rosen by naming him an “agent of the city,” protecting their emails from investigators for a short time. A state court eventually ordered that their correspondence be reviewed, but most of what was said between Rosen and de Blasio remained out of the public’s view. Lawyers working on the corruption case said they had a difficult time releasing the emails because Rosen and a number of other consultants working for de Blasio weren’t paid by the city. The emails that have been released are heavily redacted.[9]

The federal investigation was concluded in 2017 with no criminal charges, but de Blasio and Rosen’s tactics were “harshly” criticized by the court.[10]

Jonathan Rosen continues to work as a political consultant, and remains the co-principal at BerlinRosen. In 2015, NY1 described Rosen as “the most powerful man in [New York City] politics outside City Hall,” based on his past ability to connect his clients to the Mayor.[11] The website Ballotpedia named Rosen a “Top Influencer” in New York State in the same year.[12]

In spite of his past indiscretions, Rosen’s firm continues to represent a long list of impressive clients, many of them left-leaning. The most extreme examples include the Ford Foundation, the MacArthur Foundation, Bend the Arc: A Jewish Partnership For Justice, Democracy Alliance, Southern Environmental Law Center, Brennan Center for Justice, Family Values @ Work, The Pew Charitable Trusts, and the Food and Water Watch.[13]

Rosen is a graduate of NYU School of Law and lives in Park Slope, Brooklyn. He and his wife Debbie live there with their two young children.[14] Political consulting has proved a lucrative career for Rosen, who at one time owned a home in Brooklyn worth more than $1 million, as well as an estate on Long Island for $2.5 million, according to New York property records.[15] Ashley Cotton, a former client of BerlinRosen, told NY1 that Rosen is “press-shy and tries to stay out of the public eye,” and that “He’s usually home with his wife and kids at night instead of out on the circuit.”

Rosen’s wife, Debbie, was at one time the chief of staff to de Blasio’s budget director.[16]