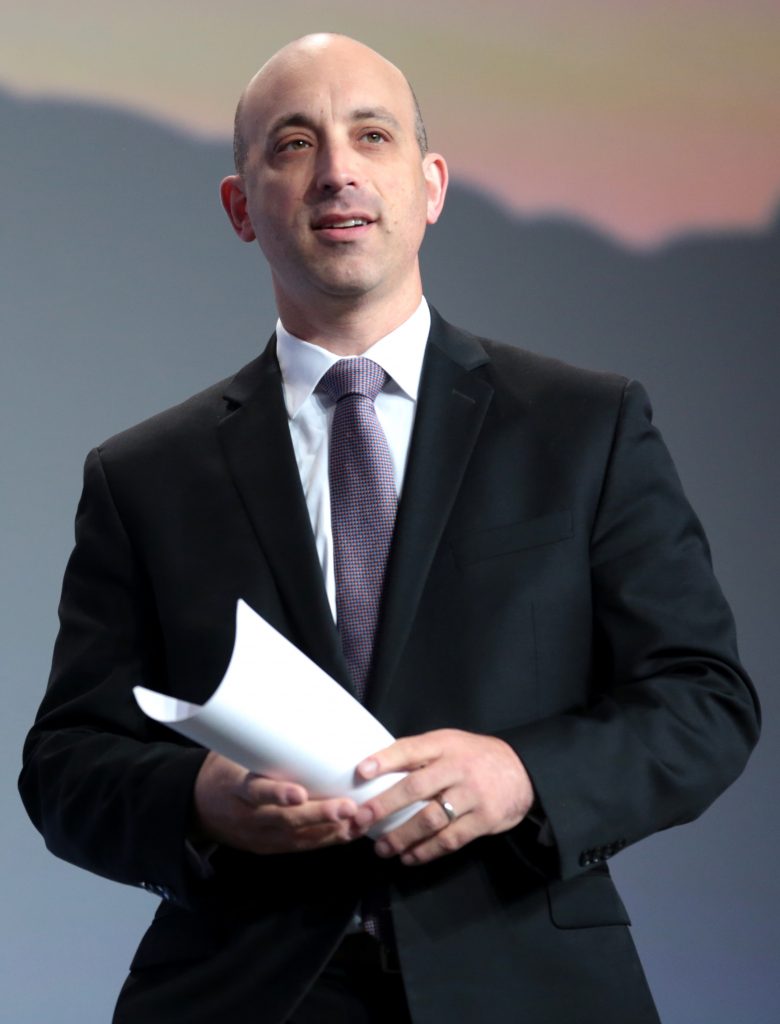 Jonathan Greenblatt is a Democratic political operative, corporate executive, and the CEO of the Anti-Defamation League. He worked for Bill Clinton’s 1992 Presidential campaign[1] and worked in the Obama White House as the director of the Office of Social Innovation and Civic Participation. [2]

Politically conservative Jewish commentators have criticized Greenblatt for appearing to place his personal liberal politics ahead of the ADL’s historical mission to oppose anti-Semitism. [3][4]

Jonathan Greenblatt was born on November 21, 1970 in Trumbull, Connecticut. He grew up in a largely family aligned with the Conservative denomination of Judaism. He earned a Bachelor of Arts degree from Tufts University (where he interned for an Anti-Defamation League regional office[5]) and an MBA from the Kellogg School of Business at Northwestern University.

He is married to Marjan Keypour Greenblatt, an Iranian-Jewish refugee who founded the non-profit Alliance for Rights of All Minorities (ARAM), which aims to prevent discrimination in various public and social spheres in the United States. He currently has three children. [6]

Greenblatt is a partisan Democrat, having served the administrations of Presidents Bill Clinton and Barack Obama.

After graduating from Tufts University, Greenblatt went to Little Rock, Arkansas to work on the successful 1992 Bill Clinton presidential campaign. [7] After Clinton’s election, Greenblatt went on to work in the Department of Commerce focusing on economic policy. [8]

Greenblatt worked as a special assistant to the President in the Obama White House. In this role, Greenblatt advised President Obama on the day-today on various social and economic policy related discussions. Greenblatt also served as the Director of the Office of Social Innovation in the Obama White House; the Office existed to promote the left-of-center not-for-profit advocacy sector. [9]

Jonathan Greenblatt works as the CEO and national director of the Anti-Defamation League, an international Jewish non-governmental organization founded in 1913 based in the United States. He took the position in July 2015, succeeding ADL’s longtime leader Abraham Foxman. [10]

In early 2020, in response to a series of violent attacks against Orthodox Jews in New York and New Jersey, Greenblatt and the ADL led a Rally Against Anti-Semitism in New York City. His remarks included a focus on solidarity against anti-Semitic terror and the work the Anti-Defamation League has been doing for some time with regard to “the surge in anti-Semitic violence in New York and across the country in recent years.” [11]

As national director and CEO of the ADL, Greenblatt “has modernized the organization while refocusing it on the dual mission it has had since its founding in 1913: to fight the defamation of the Jewish people, and to secure justice and fair treatment for all.” [12] The “modernization” has proved controversial with politically conservative members of the Jewish community, some of whom have accused Greenblatt of putting his personal progressive politics before unity against anti-Semitism.

In the politically conservative and historically Jewish journal Commentary in 2018, Seth Mandel wrote:[13]

Greenblatt took three hallmarks of Team Obama [a reference to former President Barack Obama’s political operation] with him when he left: a belief that liberalism and modern morality were synonymous; an obsession with [then-Israeli Prime Minister] Benjamin Netanyahu; and a rivalrous antagonism toward anyone to his right who called out anti-Semitism.

Mandel further alleged that while the Greenblatt-led ADL “will rap a Democrat on the knuckles and claim partisan evenhandedness,” Greenblatt himself “sees right-wing bigotry as a crucial element of conservative ideology, while viewing any such transgressions on the left as isolated anomalies.” [14]

Greenblatt is the co-founder and creator of Ethos Water with his business school roommate Peter Thum. The company was purchased by Starbucks for $8 million and Greenblatt went on to serve as Starbucks’ vice president of Global Consumer Products. He then went on to get on the board of directors of the Starbucks foundation in which he aimed at strategizing around Ethos Water, its branding, and its investment strategy. [15] Ethos also provides clean drinking water to poor communities in Bangladesh, the Democratic Republic of Congo, Ethiopia, Honduras, India, and Kenya. [16]

Moreover, ““Jonathan has served on numerous startup and non-profit boards, including the African Leadership Foundation, Kevita, KaBOOM!, and Water.org. [20]