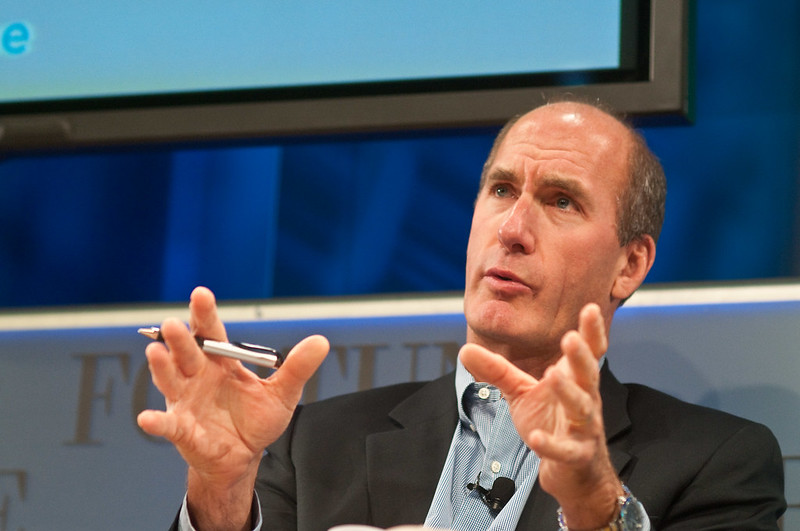 John Stankey serves as chief executive officer of WarnerMedia, the largest entertainment company in the world. [1] Prior to taking up the head of WarnerMedia, Stankey worked with telecommunications company AT&T for over three decades. Born in Los Angeles, Stankey was the third of three children of an insurance underwriter and a homemaker. [2] Stankey received his bachelor’s degree in finance from Loyola Marymount University and his MBA from the University of California Los Angeles (UCLA). [3]

In 2018, Stankey was one of just three people on the Hollywood Reporter’s list of the Top 100 Most Powerful People in Hollywood to donate to Republicans in the 2018 midterm election cycle.

Prior to becoming chief executive of WarnerMedia, Stankey spent three decades working with AT&T. Stankey held numerous positions within the company, including chief executive of AT&T Entertainment Group, president and chief executive of AT&T Operations, and president of Telecom Operations. [4] As chief strategy officer for AT&T Corporate Strategy, Stankey created Otter Media in partnership with the Chernin Group, a venture that acquires and launches over-the-top (OTT) media services. Today, Otter Media has grown to serve over 90 million viewers in the United States. [5] Stankey currently serves on the corporate board of Otter Media, and the board of the United Parcel Service. [6]

In 2018, AT&T purchased Time Warner. After a lengthy anti-trust trial, the companies merged to form WarnerMedia, the company of which Stankey is now chief executive. WarnerMedia is now the largest entertainment company in the world, with subsidiaries including HBO, AT&T, TBS, CNN, DC Entertainment, Cartoon Network, and Adult Swim. [7] In 2018, WarnerMedia reported revenues over $33 billion. [8]

When AT&T bought Time Warner in 2018, the Department of Justice sought to block the merger on anti-trust grounds. The DOJ claimed that the merger would allow the company, namely AT&T’s subsidiary DirecTV, to have an unfair advantage over other television providers for access to Time Warner’s Turner networks. [9] The DOJ claimed that if the merger went forward, AT&T could withhold Time Warner programming from other networks, meaning that unhappy consumers would have to switch to AT&Ts DirecTV to access certain programs. This would give AT&T an unfair price negotiation advantage, which the DOJ claimed violated antitrust statutes. [10] Stankey and AT&T claimed in response that the merger would allow the company to better capitalize on changing consumer habits driven by companies like Netflix and Amazon, which would result in greater competition. [11] The case went to trial in May 2018 in the United States District Court for the District of Columbia.

Stankey was required to testify on behalf of AT&T, as the executive tasked with overseeing the merger of the two companies. [12] Under oath, Stankey gave testimony which claimed that the merger would create $2.5 billion in synergies, which may have influenced the judge to rule in AT&T’s favor. [13] The DOJ’s expert witness testified later in the trial that Stankey had given false testimony, explaining that none of the claimed synergies could be verified or determined to be specific to the merger. [14] Nonetheless, Judge Richard Leon ruled in favor of AT&T, and the merger was permitted to move forward, prompting the creation of WarnerMedia with Stankey at its head.

Since the merger, Stankey has taken an active role in restructuring WarnerMedia with the goal of cornering as much as the consumer market for streaming and digital entertainment as possible. [15] Stankey has drawn criticism for speeding the exits of longtime HBO and Turner heads, while giving more power to chiefs of CNN and Warner Bros. [16] Stankey has forced further cultural changes at WarnerMedia, getting rid of divisions of the company which traditionally focused on catering to niche audiences in order to try to create broadly appealing content. [17]

Executives at HBO, a network known for taking large risks with very high payoff, reportedly claimed they felt pressure from Stankey to change its identity to become a producer of “things that already exist,” rather than a creator of culture. [18] Stankey has also been accused of applying AT&T’s hierarchical to the entertainment side of the company, stifling an atmosphere of dissent in which HBO and Warner Bros. previously thrived. [19] Employees have commented that WarnerMedia, under Stankey’s leadership, is no longer a place where an underling can challenge an executive. [20]

As an executive, Stankey has gained a reputation for demanding an efficient expansion of WarnerMedia. Stankey has requested that HBO increase programming by 50 percent and authorized an additional $500 million to the HBO budget in an effort to drive more original content. [21] Stankey’s demands for rapid expansion have been credited to a desire both to compete with Netflix and a vision of targeting consumer ads without having to go through Google or Facebook. [22] [23]

When Stankey took the helm of WarnerMedia, he envisioned bringing together all divisions of the company to monetize assets like old “Looney Toons” cartoons in on-demand viewing. [24] Stankey entrusted this task to Warner Bros. studio chief Kevin Tsujihara, who stepped down from the position at the end of March 2019 after an actress made a sexual misconduct allegation against Tsujihara. [25] [26]

CNN became a subsidiary of WarnerMedia following the 2018 merger of AT&T and Time Warner. Stankey has since clashed with President Donald Trump, saying his attacks on CNN are tantamount to attacks on a free press and that CNN has a “special social responsibility” to protect democracy in light of these attacks. [27] Furthermore, Stankey retained Jeff Zucker as the head of CNN, who has frequently clashed with President Donald Trump, in spite of pressures to institute new leadership. [28]

Company employees have expressed doubts about Stankey’s ability to manage CNN. [29] At a 2018 town hall with Anderson Cooper immediately after the announcement of the merger, Stankey said that editorial independence is “earned” when “a reporter does their job the right way.” [30] Stankey was then criticized for seeming to “reserve the right” to take away CNN’s editorial freedoms whenever he determines that reporters have not done their jobs the “right” way, with emphasis on the ambiguity of determining just which way is right. [31]

Critics have expressed concerns about Stankey’s ability to handle the responsibility to determine whether a piece of reporting is done “right,” especially when put under pressure by very powerful people and organizations, including potentially President Donald Trump. [32]

Stankey has not made many political contributions over the past several decades, but the few contributions he has made have not gone unnoticed, due to his large public profile and the Hollywood political climate. In 2018, John Stankey was named one of the 100 most powerful people in Hollywood by The Hollywood Reporter. [33] Of the 100 people on that list, Stankey was one of only three to donate to Republicans. During the 2018 midterm cycle, Stankey gave $2000 each to Republican U.S. Senate candidate Marsha Blackburn of Tennessee and to the National Republican Congressional Committee. [34]