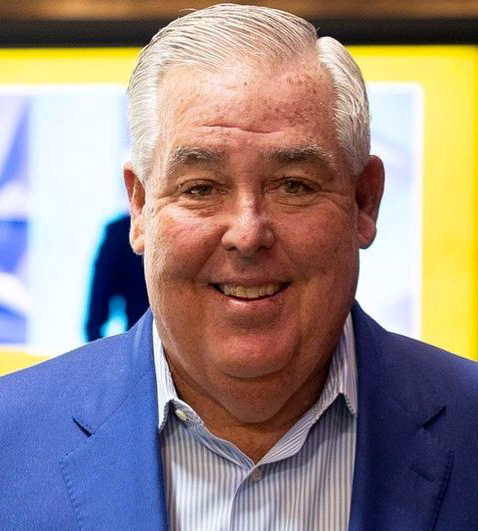 John Morgan is a Florida-based trial lawyer and a partner and founder of one of the nation’s largest law firms, Morgan and Morgan.

Morgan has donated millions of dollars to Democratic candidates[1] and left-of-center ballot propositions including legalization of marijuana and raising the Florida minimum wage to $15 an hour. [2]

He has been nicknamed “Pot Daddy” for his spending on marijuana initiatives,[3] has been compared to President Donald Trump due his candid speaking style,[4] has dined with George Soros[5] and President Barack Obama,[6] and ran an abortive campaign for the 2018 Democratic Florida gubernatorial nomination. Morgan endorsed former Vice President Joe Biden for the Democratic nomination for President in 2020. [7]

Morgan has had public spats with prominent U.S. Representative Debbie Wasserman-Schultz (D-FL), a skeptic of some of Morgan’s marijuana legalization proposals. Schultz disparaged Morgan’s pro-marijuana movement over concerns about children’s exposure to the drug. Morgan fired back comments describing her as, “despised…an irritant…irrelevant.” Shultz purportedly reacted by seeking a private deal over e-mail with Morgan to retract his comments in exchange for her support of a pro-cannabis bill; Morgan subsequently shared the e-mail exchange with Politico. [8] Morgan further condemned Wasserman-Schultz for her role as head of the Democratic National Committee because of the e-mails that indicated alleged bias towards the Presidential candidacy of former Secretary of State Hillary Clinton over U.S. Senator Bernie Sanders (I-VT) in 2016. [9]

John Morgan has been arrested twice for allegedly driving under the influence. The first time, in 1993, Morgan pleaded guilty to a reduced charge of reckless driving. On the second occasion, in 1998, Morgan allegedly head-butted a police officer, leading to the police filing a charge of battery on a police officer. Morgan pleaded guilty to a misdemeanor as part of a deal that saw prosecutors drop the battery charge and led to him avoiding jail time. [10][11]

In December of 2018, Morgan’s law firm, Morgan & Morgan, lost a legal malpractice suit that led to a judgment of $5 million. The court found that Morgan & Morgan failed to represent a client adequately after her newborn had suffered permanent brain damage during delivery that also destroyed her ability to have children. After the announcement of the judgment, John Morgan declared his intention to continue to fight the verdict. [12]

John Morgan has leveraged his near-celebrity status, earned through his firm’s ubiquitous television advertising, to shape the political landscape in Florida. He strongly backed the ballot measure campaign to legalize medical marijuana in 2016, contributing nearly $9 million to it. In 2014, the measure was defeated but Morgan experienced a subsequent victory in 2016. [13]

Then-Florida Governor Rick Scott (R) delayed the implementation over the legality of smoking marijuana. Morgan then launched and won a lawsuit against the state that permitted the legislation to become law. Opponents claim that Morgan’s endeavors were intended to generate personal profit or to increase Democratic voting in the 2016 Presidential election. [14]

Since that victory, he has begun further initiatives for laws to be placed on the ballot for the 2020 election. He initially drove and strongly supported a vote for recreational marijuana, but has shifted his focus towards the increase of Florida’s minimum wage to be raised to $15 per hour, a major labor union priority. [15]

John Morgan has painted those opposed to legalizing marijuana as racists. [16] He considers the issue a civil justice matter and thinks anyone in prison charged with possession should be released. [17]

Morgan has invested at least $5 million to have the $15 minimum wage placed on the 2020 Florida ballot. [18] He describes the opponents of the increase as supportive of “slave labor.” [19] Critics have in turn claimed that Morgan, a prominent supporter of Florida Democrats, is only seeking to drive greater Democratic voter turnout in a Presidential election cycle. [20]

Morgan’s candidate support for prominent Democrats includes serving as the Florida finance chairman for former President Bill Clinton and raising millions for the re-election of President Barack Obama. Morgan was reportedly considered a candidate for a patronage ambassadorship in the Obama administration, but Morgan informed Obama’s campaign manager, Jim Messina, to tell the President’s team he was not interested. [21] He supported 2016 presidential candidate Hillary Clinton and donated $250,000 to 2018 Democratic gubernatorial nominee Andrew Gillum. [22]

Morgan has harshly criticized politicians he does not support. He claimed he received a medical marijuana prescription from a doctor due a diagnosis of PTSD because of President Donald Trump. [23] He has frequently criticized former Florida Governor Rick Scott and other Republican politicians. Morgan has made lesser donations to Republicans that work in the state legislature.

Before the 2018 election, some polls had John Morgan as the leader for the Democratic nomination for governor of Florida, although he never officially announced a campaign. [24] He decided against running for office to focus on the passing of the medical marijuana legislation. Some observers believe that Morgan’s political activities have all been specifically designed to set up a successful campaign for governor. [25]