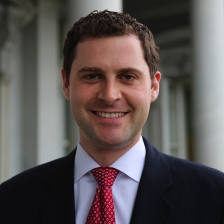 Before joining the Obama administration, Bisognano worked for a number of Democratic campaigns, including both of President Obama’s presidential campaigns. Bisognano also worked as the coordinated campaign director for the New Hampshire Democratic Party during the 2016 election and sits as the executive director for the Association of State Democratic Chairs for the Democratic National Committee (DNC). [4]

John Bisognano was born in Milton, Massachusetts in 1985. Bisognano attended Providence College, a liberal arts school at which he earned both his undergraduate degree and an MBA in marketing. [5]

Bisognano has been organizing within the Democratic Party for nearly his entirely career, in 2019 being appointed executive director of the National Democratic Redistricting Committee (NDRC), an organization aimed at fighting Republican legislative and Congressional redistricting efforts. NDRC is a Democratic Party-affiliated PAC established and chaired by former Obama administration U.S. Attorney General Eric Holder. [7] NDRC was founded in January of 2017, with Bisognano involved in various roles from the time of NDRC’s founding, first working as NDRC’s director of campaigns and outreach before being promoted to executive director in 2019. [8] [9]

NDRC was created to combat partisan gerrymandering with the express purpose of creating districts “where Democrats can compete.” [10]  To combat Republican redistricting, NDRC engages in public pressure campaigns, litigation, legislative efforts, and electoral advocacy in favor of Democrats to sway political power before redistricting occurs again in 2021. [11] Aside from advocating for redistricting reform, NDRC has endorsed Democratic candidates in contested districts across the United States. [12]

NDRC has received endorsements from a number of left-of-center people and organizations, including President Obama. [13] In 2019, NDRC merged with President Obama’s own PAC, Organizing for Action. [14]

Bisognano has led these organizing efforts as NDRC’s executive director. [15] Despite endorsing candidates in and targeting key states for Democrats, Bisognano has insisted that Democrats would not try to gerrymander districts if they regained political power. [16] Bisognano has also claimed that NDRC aims to create public awareness and transparency around redistricting, an idea that other experts have professed to be no more than a “dog and pony show.” [17]

All On The Line

Bisognano is also the executive director of All On The Line, a nominally grassroots organization affiliated with National Democratic Redistricting Committee that promotes organizing efforts against Republican redistricting. [18] All On The Line has targeted ten states with its initiative, focusing exclusively on swing states in which Democrats have lost power. [19] Some of these states, such as Ohio in which Republicans control the legislature, already require bipartisan support for redistricting plans, yet All On The Line continues to allege that the districts it draws will be “unfair” and Bisognano himself has called the Ohio Legislature a top 2020 priority. [20]

In 2016, Bisognano worked as the Democratic Party’s coordinated campaign director in New Hampshire, leaving his position in the Obama White House to coordinate party advocacy for then-presidential candidate Hillary Clinton and other Democratic candidates across the state. [21]

New Hampshire Democratic Party chairman Raymond Buckley called Bisognano “one of the top operatives in the country.” During his time with the coordinated campaign in New Hampshire, Bisognano oversaw 100 employees and 24 regional offices. [22]

Bisognano has a long history of Democratic organizing and campaign work. During President Obama’s 2008 campaign, Bisognano worked as a field organizer and later became the deputy national regional director with Organizing for America. [23]

After Bisognano worked as the Massachusetts political director and communications advisor at Obama for America, he became executive director for the Association of State Democratic Chairs for the DNC in 2013, coordinating Democratic state efforts. [24]

Work in the Obama Administration

After working on both Obama presidential campaigns, Bisognano joined the Obama White House staff in 2013, becoming Associate Director of Public Engagement in 2015. [25]  During his time at the White House, Bisognano worked as the public liaison for the progressive, labor, and national security communities. [26] In this capacity, Bisognano advocated for the left-of-center policies supported by the Obama administration to special interest groups, including increasing the minimum wage, working with labor unions, and instituting new financial regulations. [27]

Bisognano also assisted in advocating for left-of-center foreign policy initiatives, including the controversial Iran nuclear deal and the effort to close the Guantanamo Bay detention center. [28] Bisognano led a roundtable discussion at the White House with the left-progressive Arab American Institute (AAI) to discuss the Syrian refugee crisis. [29] Bisognano was listed as a “senior advisor” to the organization. [30]

Despite Bisognano’s repeated claims that the redistricting efforts he promotes aim only at promoting political fairness, Bisognano is a frequent critic of Republicans and conservative policies, especially through his active Twitter account. After President Donald Trump caught coronavirus in October of 2020, Bisognano commented that President Trump “endangered his own family” and would also endanger Americans. [31] Bisognano also retweeted content claiming that “Republicans realize they have to cheat to win” and personally called President Trump “hyped up on more steroids than Barry Bonds.” [32]