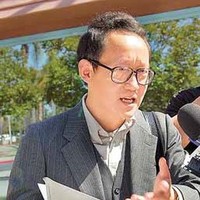 Jing Zhao is a think tank manager who is active in shareholder advocacy, frequently submitting left-leaning shareholder resolutions to some of the largest companies in the world. Zhao frequently advocates for left-of-center corporate governance policies and new human rights policies, specifically for businesses that do business in the People’s Republic of China.

Zhao was born in China and now lives in California. [1] Zhao is a classicist by trade, who works to translate classical Latin works into contemporary Chinese. [2] In addition to his translation work, Zhao runs the US-Japan-China Comparative Policy Research Institute (CPRI), a small think tank founded in 1997 by a group of Chinese academics living in Silicon Valley. [3] [4] The think tank completed comparative research in social, cultural , economic, political, and industrial policy issues that impact the tri-fold interactions between the United States, China, and Japan until 2008. Since 2008, the CPRI has shifted its focus, today writing, translating, and publishing books in Chinese, English, and Japanese. [5]

CPRI also works as an education and consulting firm, providing strategic services in US-Japan-China relations, offering public lectures and articles, and participating in the work of other international research institutes. [6] CPRI publishes an annual review of its translated materials, with Zhao listed as the only author. [7]

In 2018, Zhao filed a resolution at Apple requesting that the company form a committee to evaluate the human rights implications of corporate policies. [10] Zhao filed the resolution in response to Apple’s decision to bow to Chinese censorship and remove hundreds of virtual private network (VPN) apps from its Chinese app store. [11] VPNs are extremely popular in China, allowing Chinese citizens to access online content that is blocked by the Chinese government’s aggressive internet censorship. [12]

Zhao filed the proposal in March 2018 and received a negative response from Apple, who appealed to the Securities and Exchange Commission (SEC) to strike it down. [13] The SEC denied the appeal, and the resolution was submitted for a vote. [14] Just 5% of shareholders voted in favor of Zhao’s proposal. [15]

Also in 2018, Zhao proposed the creation of a committee for overseeing human rights and corporate social responsibility as a shareholder resolution at Twitter. [16] Twitter’s board unanimously recommended that shareholders vote against the proposal. [17] Zhao has submitted resolutions for such human rights committees at various global companies for nearly a decade, including Verizon, Goldman Sachs, and Chevron. [18]

Zhao has advocated for companies to cut off trade with China for the purposes of limiting China’s ability to censor its citizens. In 2010, Zhao submitted a failed proposal to Cisco, arguing that the company should not market, sell, or export any products to law enforcement agencies in China, or to any entities in China that could “in any way be connected with the monitoring of Internet use or electronic communications.” [19]

The following year, Zhao filed a similar resolution calling upon Yahoo to end business with Chinese authorities and assist users in circumventing Chinese law to access online content. [20] During the early 2010s, Yahoo was central to Zhao’s shareholder advocacy, with Zhao frequently accusing Yahoo of supporting human rights abuses and demanding that the company adopt an extensive code of conduct. [21]

In 2018, Zhao filed a shocking shareholder resolution at Tesla, a company in which he owns just twelve shares, calling for the removal of CEO Elon Musk from his role as chairman of the board. [22] Zhao argued that Musk, who has served as chairman since 2004 when the company was founded, cannot be an independent chairman due to his involvement in other companies, including SolarCity and SpaceX. [23]

The board asked shareholders to vote against the proposal, citing Musk’s success and the existence of a Lead Independent Director already advising the Tesla board to avoid conflicts of interest. [24] Tesla shareholders rejected Zhao’s proposal in June 2018. [25] Musk stepped down from the chairmanship four months later amid fraud charges and a $20 million settlement with the SEC. [26]

In 2018, Zhao submitted a shareholder resolution to Wells Fargo, asking that the company employ independent experts and members of the general public to reform its executive compensation policy with “social responsibility” in mind. [27] Ceres, a left-of-center environmental, social, governance organization specializing in shareholder advocacy for environmentalist causes, backed Zhao’s proposal. [28]

Zhao’s statement of support for the proposal argued that any “paid consulting firm” could not recommend a “socially responsible” salary, arguing that executive compensation should be in proportion to worker pay. [29] Zhao referred to rising executive pay as “socially immoral.” [30] When brought to a vote, Zhao’s proposal received only 6% of shareholder votes in its favor. [31]

Zhao has filed shareholder resolutions at several major companies requesting that they establish “public policy” committees to advise the board of directors on any company policies that may have political implications. [32] In 2014, he filed such a proposal with Cisco and NetApp, and the following year he submitted an identical resolution with IBM. [33] Zhao has submitted similar resolutions over the past five years with Twitter, Facebook, and Tesla. [34]