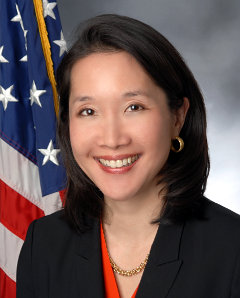 Jenny R. Yang is the Director of the Office of Federal Contract Compliance Programs for the U.S. Department of Labor in the Biden administration. Yang previously served as Commissioner, Vice Chair, and Chair of the U.S. Equal Employment Opportunity Commission in the Obama administration. As a government official, Yang has prioritized left-of-center employment policy. Yang worked to expand employment protections for members of the LGBT community, to close the alleged gender and racial wage gaps, and to promote diversity trainings associated with critical race theory. [1] [2]

Jenny Yang earned her bachelor’s degree from Cornell University and graduated from NYU School of Law in 1996. From 1996 to 1997, Yang worked as a law clerk for the Eastern District of Pennsylvania District Court. [3]

After working as a law clerk, Yang was an attorney for the left-of-center National Employment Law Project from 1997 to 1998 and then a Senior Trial Attorney in the Civil Rights Division for the United States Department of Justice (DOJ) from 1998 to 2003. From 2003 to 2013, she was a partner at the law firm of Cohen Milstein Sellers and Toll, representing workers in civil rights and collective action lawsuits. [4][5]

In the Obama administration, Yang worked for the U.S. Equal Employment Opportunity Commission (EEOC) from 2013 until 2018, beginning her time there as a commissioner. She served as the Vice Chair of the EEOC from April 2014 to September 2014 and as Chair from September 2014 to January 2017.

While at the EEOC, Yang created a special task force which studied harassment and pay discrepancies between races and genders in an effort to decrease the alleged gaps. Yang also made addressing systemic racism, along with race and gender representation in hiring, a priority. [6] [7]

Yang was named Director of the Office of Federal Contract Compliance Programs for the U.S. Department of Labor on President Joe Biden’s first day in office. [8] Yang has stated that as Director, she wants to continue her work on achieving racial and gender equity. In her position, she will oversee approximately 20% of the American workforce and wants to work with federal government contractors to “expand economic opportunity” for ethnic minorities and women. [9]

Yang has stated that she wants to make diversity training a focus for employees under government contracts, including discussions on topics such as so-called white privilege. Yang has emphasized the impact that federal contractors have on race relations and has sought to use her position to promote left-progressive ideas. [10]

Yang is a senior fellow at the left-of- center Urban Institute. With the Urban Institute, Yang performs research that supports her advocacy for social programs for ethnic minorities and women to achieve equal outcomes in employment. Yang also advocates for policy that would require increased benefits for contracted workers with an emphasis on racial and gender status. [11]

Yang is listed by Demand Justice, a project of the left-of-center Sixteen Thirty Fund, on its shortlist of preferred Supreme Court nominees. [13]