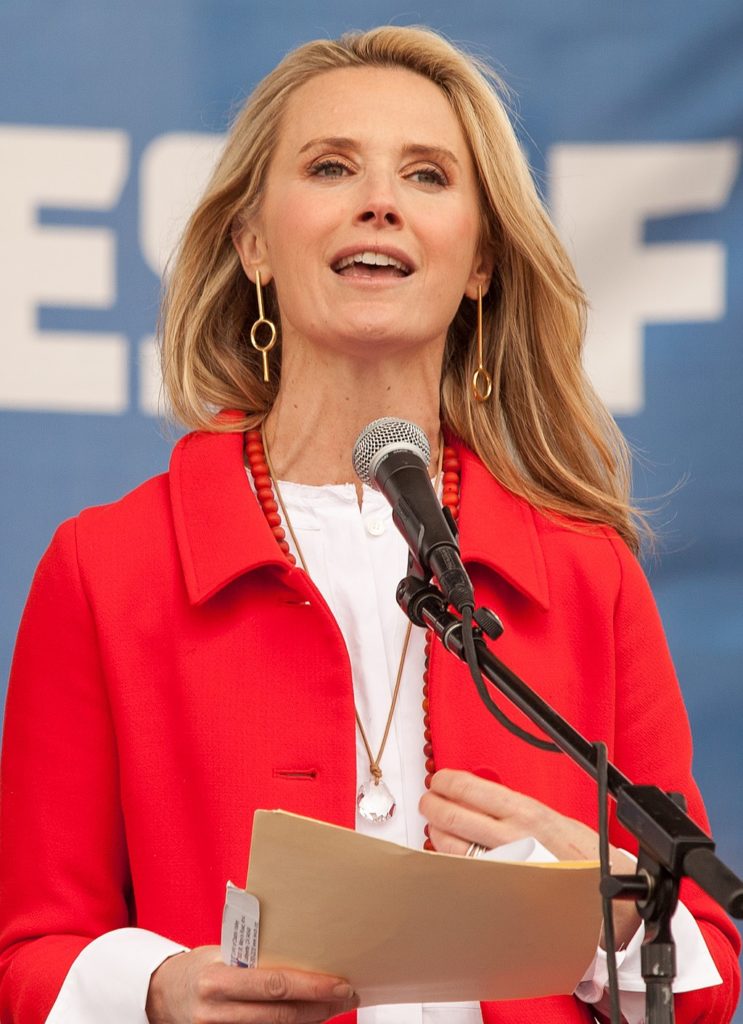 Jennifer Seibel Newsom is an actor, filmmaker, and nonprofit executive who is married to California Governor Gavin Newsom (D). Newsom has written and directed several left-progressive advocacy documentaries on topics such as gender and economic mobility. [1]

Since 2011, Newsom has led the Representation Project, a nonprofit she founded that promotes left-feminist social and left-of-center economic policies by producing and screening documentaries, promoting left-of-center educational resources, and leading social media activism campaigns. [2] The Representation Project has faced criticism for accepting large contributions from companies and organizations that were also lobbying the Newsom administration. [3]

Jennifer Seibel Newsom grew up in Ross, California and attended the Branson School, a private preparatory school. Newsom then went to Stanford University, where she completed undergraduate and graduate degrees. After college, she moved to Los Angeles as an aspiring Hollywood actress. [4]

As an actress, Newsom had 40 credited roles from 2002 to 2011, most of which were small parts on television shows. The most well-known television show she appeared in was “Mad Men,” for which she performed in one episode. [5]

In 2008, Jennifer Seibel Newsom became engaged to Democratic politician Gavin Newsom, who was then the Mayor of San Francisco. The couple was described as having met at various “high society”[6] events. Their marriage was Gov. Newsom’s second, after he was married to right-of-center commentator Kimberly Guilfoyle from 2001 to 2006. [7]

Early in their relationship, Jennifer Seibel Newsom publicly defended the then-Mayor Newsom amid revelations that Newsom had an affair with his campaign director’s wife, who worked for the San Francisco Mayor’s Office. Then-Mayor Newsom acknowledged the affairs and sought treatment for alcohol abuse. Seibel Newsom, at the time Gavin’s girlfriend, stood by Mayor Newsom, stating that the affair happened at a “dark time” in his life amid his divorce from Guilfoyle and the recent passing of his mother. [8] [9]

In 2011, Jennifer Seibel Newsom founded the Representation Project, taking on the title of chief creative officer. She has used the organization to fund film projects and has released several documentaries on topics such as poverty and gender, including Miss Representation, The Mask You Live In, and The Great American Lie. [10]

In June 2021, the Representation Project, along with Gov. Newsom and Seibel Newsom, faced criticism following a Sacramento Bee report that donors to the nonprofit were also companies that had lobbied the Newsom administration. The Representation Project, which funds Seibel Newsom’s $290,000 annual salary in addition to funding her film projects, was revealed to have received funds from companies with large lobbying presences in California, including Pacific Gas and Electric, Kaiser Permanente, AT&T, and Comcast. Kaiser Permanente has received state contracts in excess of $35 million during Gov. Newsom’s tenure, while Pacific Gas and Electric faced government scrutiny after admitting fault for multiple California wildfires. [11]

Pacific Gas and Electric contributed $25,000 to a fundraiser held by the Representation Project a week after Gov. Newsom’s 2018 election. Comcast and AT&T also gave $10,000 to support the fundraiser. Gov. Newsom denied the implication that the gifts were an attempt to gain favor with his administration. [12]

Board Memberships and Affiliations

Jennifer Seibel Newsom sits on the Global Advisory Board of the Dove Self Esteem Project, is a co-chair of We Day California, and is a commissioner on the Girl Scouts of America Healthy Media Commission. [13]