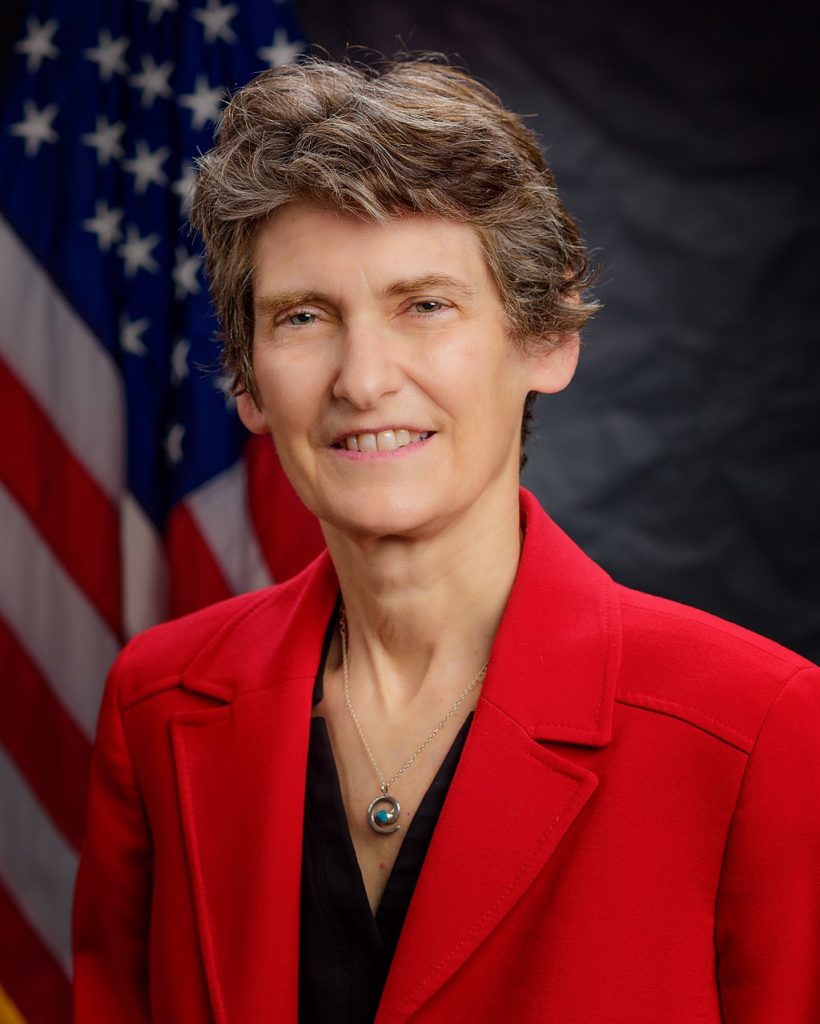 McCabe has faced criticism from Senators from both the Republican and Democratic parties[3] and the Wall Street Journal. [4] McCabe was disparaged for the policies she had a hand in enforcing or creating, including the Clean Power Plan,[5] Mercury and Air Toxics Standards (MATS),[6] and the Renewable Fuel Standard (RFS). [7] The 3,900 EPA regulations created during her service were denounced for costing the economy billions. [8] Both West Virginia senators described McCabe’s impact on their state using terms like “destroy”[9] and “devastating.” [10]

McCabe criticized the Trump administration for damaging the health of Americans and the environment. [11] She has linked so-called “environmental racism” to America’s “centuries-old racism” and “the knee that has been on the neck of black Americans since the first enslaved black Africans were forcibly brought to the colonies in 1619,” and states that ethnic minority communities are at greater risk for climate change. [12] McCabe predicted that Indiana will one day welcome up to 10 million climate refugees fleeing from flooded coastal communities and Western fires. [13]

Janet McCabe is the deputy administrator for the Environmental Protection Agency serving under President Joe Biden. She worked in the Obama Administration as the acting assistant administrator of the EPA’s Office of Air and Radiation (OAR). [14] McCabe, called an “environmental pioneer,” was the director of the Indiana Environmental Resilience Institute where she helped create greenhouse gas inventories. [15]

Under McCabe, the EPA’s biofuel standards were far more stringent than previous standards, permitting far less biofuel to be used in automotive gasoline than in previous years. [16] EPA’s management of the Renewable Fuel Standard (RFS) drew criticism from Democrats, Republicans, and environmentalist groups. Her 2016 proposal that raised renewable fuel volume production targets was attacked for not achieving the Congressional thresholds and for exceeding market demand. [17] Sen. Joni Ernst (R-IA) asked McCabe, “Can you explain why the EPA is blatantly overlooking the law?”[18]

Then-Senator Heidi Heitkamp (D-ND) accused the EPA of “costing us investments, costing us environmentally, and costing us jobs.” Heitkamp accused McCabe and the EPA—which released the standards a year late—of costing the biofuel industry “$13.7 billion due in investment to EPA’s delay. For biofuels, 54 plants in 20 states have closed or idled due to lack of certainty from EPA.” Her comments were seconded by Sen. James Lankford (R-OK). [19]

In 2021, Sen. Shelley Moore Capito (R-WV) issued a statement explaining her “no” vote against Janet McCabe’s appointment to be deputy administrator of the EPA. She claimed that McCabe’s previous service in the EPA contributed to regulations that crushed West Virginia’s economy and that if confirmed she “would work to destroy West Virginia’s economy, community, and livelihood.” [21]

During a speech on the Senate floor, Capito alleged that McCabe was the “the architect of the Clean Power Plan, that basically wracked my economy in West Virginia.” She said McCabe acted with “little interest” in the welfare of West Virginians. [22]

Capito questioned the accuracy of McCabe’s statement that an EPA plan to clean the atmosphere would reduce costs for average Americans. Capito alleged that the EPA’s actions would increase energy costs from 17% to 37% of take-home pay for 430,000 low-income West Virginians. [23]

Sen. Joe Manchin (D-WV) voted against McCabe’s appointment because she “was one of the chief architects of the Clean Power Plan that would have required coal plants to use unproven technology.” Manchin claimed that McCabe’s plan “would have been devastating for places like West Virginia, and I am concerned by her continued defense of this harmful rule.” [24]

Sen. Kevin Cramer (R-ND) questioned the veracity of McCabe’s vow to collaborate with states on environmental regulations. Cramer argued that “the Clean Power Plan proved to be one of the most overbearing big government impositions on states ever.” [25] Cramer explained to McCabe, “You have a steeper hill to climb, frankly, than most.” [26]

In 2016, Rep. Lamar Smith (R-TX) sent a letter to the head of the EPA asking if Janet McCabe’s frequent airline travel was within the spirit of a “sustainable commuting” executive order issued by then-President Obama. Smith pointed out that McCabe’s weekly commutes from Washington to Indiana raised doubts about her commitment to reducing carbon emissions, stating that this travel “raise[d] significant questions about the example EPA is setting.” [27]

The Inspector General of the EPA, Arthur A. Elkins Jr. investigated claims of overtime violations within McCabe’s department. He concluded the reason for the $12,948 in overtime “resulted primarily from staff resource shortfalls and the chronic unpredictable schedule of” McCabe. [28]

In 2011, Janet McCabe was one of the authors of the EPA’s Mercury and Air Toxic Standards (MATS)[29] that the Supreme Court struck down in 2015. In an editorial, the Wall Street Journal compared the effects of MATS on the U.S. power grid to the firebombing of Dresden, Germany in World War II. It alleged that the effect of MATS would be the closure of more than 1,000 fossil-fuel-fired electric power plants “at a cost of billions of dollars.” [30] McCabe replied with an editorial defending the policy, claiming that “power plants are the largest single source of both mercury and carbon pollution in the U.S.” [31]

McCabe is one of the architects of the Obama administration’s Clean Power Plan. [32] Over half of the states sued to prevent its implementation. [33] Politico described the plan as “aggressive.” It was blocked by the Supreme Court before it was enacted. [34] The policy was the first federal limit imposed on power plant carbon emissions and sought to reduce them 32% below the 2005 levels by 2030. This rule was a key element in President Obama’s strategy to drive global adoption of a climate agreement at the 2015 United Nations Climate Change Conference (COP 21) in Paris. Opponents of the Clean Power Plan described it as “an unlawful expansion of federal power over electricity production,” “a blueprint for economic disaster,” and asserted that “it will cause more than 200 coal-fired power plants to close before courts have time to decide the legality of the rule.” [35]

In 2016, McCabe was the only representative from the EPA to attend a Congressional review of the impact of thousands of EPA regulations. During McCabe’s tenure, the EPA produced 3,900 regulations and rules totaling approximately 76,000 pages. The Republican-led effort aimed to understand these regulations’ impacts on the economy and the electricity sector, estimated to be in the billions. [36]

According to Politico, McCabe had, “a deep record of crafting aggressive environmental regulations.” [37] McCabe’s reputation was as an “experienced legal and regulatory hand” to aid President Biden achieve his goal of net zero carbon emissions in the United States by 2050. [38]

In 2018, McCabe wrote an opinion article in the New York Times, in which she accused the Trump administration of prioritizing industry’s profits over American’s health and for having a climate policy with, “no studies, no data, no rules.” She charged then-EPA administrator Scott Pruitt with crippling the agency through his scrutiny of its climate studies and labeling them “secret science.” McCabe alleged Pruitt’s “new policy could be a catalyst for the unraveling of existing public health protections,” and “under Mr. Pruitt’s approach to science, the E.P.A. would be turning its back on its mandate to ‘protect human health and the environment.’”[39] McCabe claimed that Pruitt’s goal was to help the coal industry at the expense of public health and the environment. [40]

In 2020, while leading the Environmental Resilience Institute, McCabe wrote an article explaining how the phrase “I can’t breathe” symbolizes police brutality and America’s systemic racism that started in 1619. McCabe claimed that communities of color are systematically oppressed because of exposure to higher levels of air pollution that impacts their health and that they would be exposed to disproportionate impacts from climate change, substandard water quality, and proximity to harmful waste and emission sites. McCabe called for a commitment to “pursuing equity and environmental justice in all our work,” and to conduct self-examination to identify personal actions that contribute to systemic racism. [41]

McCabe told a House Science Committee that “costs to our economy and to society from the impacts of climate change that is already happening. In 2013, there were seven extreme weather events.… The scientific community has identified a number of impacts of climate change. Among those are increased frequency and intensity of extreme weather events.” [43]

McCabe wrote an op-ed describing how Indiana would one day greet its portion of the potential ten million climate refugees that will flee drowning coastal communities and blazing western states. She called the Indianapolis based migrants that left New Orleans after Hurricane Katrina “its first of climate refugees.” [44]

In August 2016, the EPA produced its annual report, “Climate Change Indicators in the United States.” McCabe said the report “reiterates that climate change is a present threat and underscores the need to reduce greenhouse gas pollution and prepare for the changes underway, to protect Americans’ health and safeguard our children’s future.” [45]