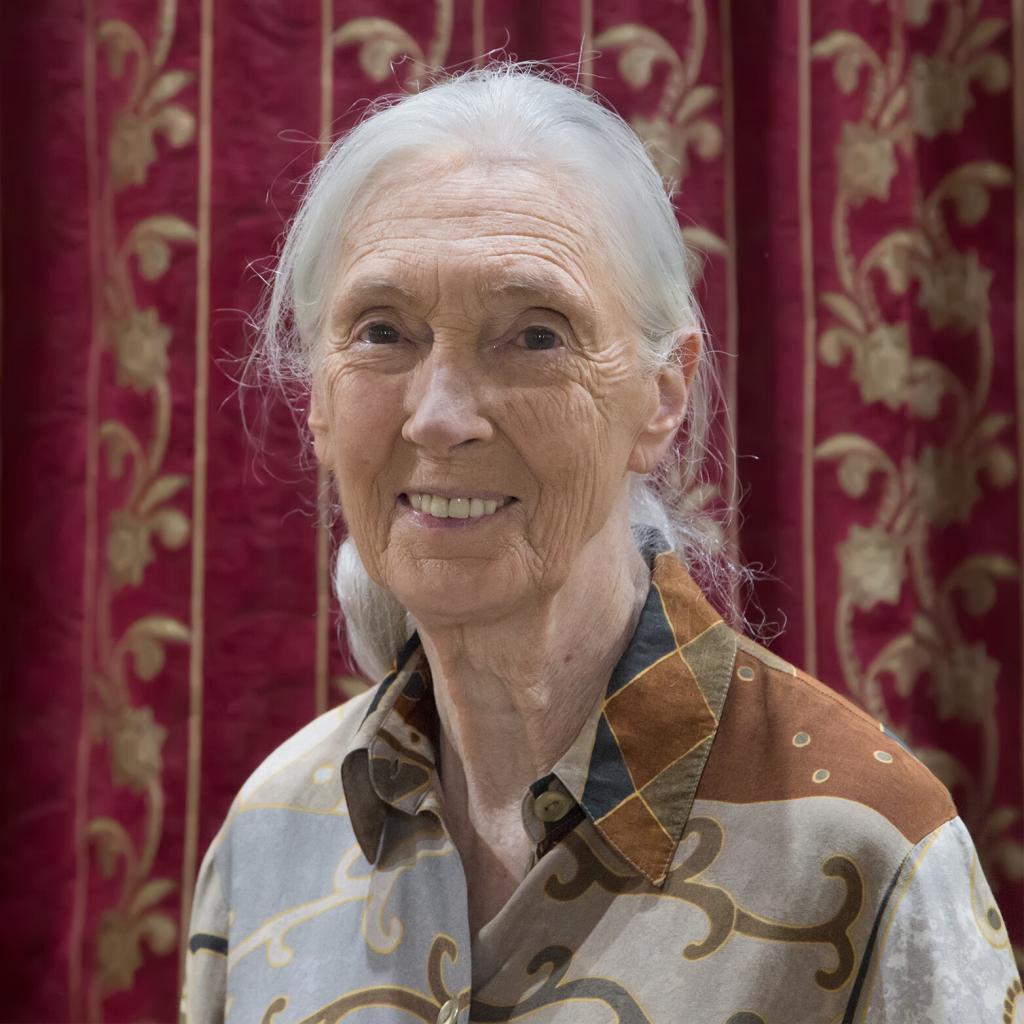 Jane Goodall is an English primatologist and far-left environmentalist. Though Goodall is best known for her chimpanzee research, she has spent much of her career as an environmentalist activist, supporting left-of-center environmental projects in both climate change and radical animal rights activism.

To provide a platform for her environmentalism, Goodall founded the Jane Goodall Institute, which works on both conservation and economic development projects. [1] Through the Institute, Goodall started the Roots and Shoots project to mobilize young environmentalists, which now operates in 86 countries. [2] Goodall is also a founding board member of the Nonhuman Rights Project, a far-left animal advocacy group that seeks legal standing and other civil rights for animals. [3] [4]

Jane Goodall was born in London in 1934. She left school at 18, working as a film production assistant to pay her way to Africa where she worked as a research assistant to anthropologist Louis Leakey. [5] In June of 1960, Goodall started a camp in Tanzania’s Gombe Stream Game Reserve to observe chimpanzee behavior. [6] In 1965, the University of Cambridge awarded Goodall a Ph.D. in ethology, despite her never having completed a bachelor’s degree. [7] Goodall argued that chimpanzees, and other animals, have consistent personalities over time and use tools in daily life, controversial discoveries that challenged the definition of humans as a species and made her famous. [8]

Goodall remained in Tanzania until 1975. [9] [10] In 1977, Goodall founded the Jane Goodall Institute for Wildlife Research, Education, and Conservation. [11] The Institute works to continue Goodall’s work in studying primates, while also engaging in philanthropic projects including providing micro-credit in African communities, investing in women’s education, and providing seed funding for environmentalist projects. [12] The Goodall Institute also started the Roots and Shoots project to mobilize young environmental activists, which has since expanded to 86 countries. [13]

During the later portion of her career, Goodall became a professional activist, pushing a left-of-center advocacy agenda targeted at fighting climate change. After attending an academic conference in 1986, Goodall claimed she became “a different person,” leaving her scientific career to fight climate change. [14] Goodall has claimed that climate change is an “existential threat to humankind,” arguing that without major change, it will cause the end of humanity. [15]

Goodall’s environmentalism is premised on a left-of-center rejection of free-market ideals in favor of wealth redistribution to promote “sustainable” living. [16] Goodall has argued that climate change cannot be solved without addressing inequality and “eradicating” poverty, claiming that one of the major contributors to climate change is the fact that “millions of people on this planet have way more than they need.” [17] [18] Goodall has also advocated for “family planning” and voluntary population control as a way of containing population growth. [19]

Aside from recommending a shift towards modest living, Goodall has promoted environmental regulations, decrying American leaders for rolling back environmental regulations and promoting the interests of conventional energy companies. [20] Goodall has been particularly hostile to President Donald Trump, comparing him to a chimpanzee in 2017 and saying she will fight until her death to oppose his policies. [21] [22]

Goodall has even argued that man-made climate change is responsible for the COVID-19 pandemic, citing conditions like deforestation and the “disrespect of animals” through industrial agriculture. [23] Goodall further used the COVID-19 pandemic to argue that the world should create a “green economy” to prevent the onset of another contagious disease outbreak. [24] Goodall joined with other environmentalists during the pandemic to push such policies, including writing a letter demanding that banks and the International Monetary Fund stop funding large scale animal agriculture. [25]

Goodall is a radical animal liberationist who has argued that people should cease all animal consumption. [26] Goodall’s radical stances on animal rights have drawn controversy in the past, especially through her comparison of industrial agriculture to concentration camps which placed animals used in agriculture in the same position as Jewish people during the Holocaust. [27]

Goodall has actively intervened to promote increased animal protection regulation as well. In 2015, Goodall argued that SeaWorld should be shut down and claimed that its conditions created an “acoustical hell” for its animals, despite other scientists disputing the claim. [28] In 2018, Goodall worked with left-wing environmental law firm Earthjustice to prevent grizzly bear hunting in Wyoming and Idaho by returning the animals to the endangered species list. [29]

Goodall has also critiqued scientists for using animals in research, partnering with various left-of-center animal rights organizations to decry the use of animals in testing for vaccines and research in neuroscience. [30] Yet Goodall’s involvement on animal testing has been criticized, with experts alleging that her opposition to animal testing is not based in sound science and has stood in the way of life-saving scientific research, including the potential discovery of a new malaria vaccine. [31]

In 2007, Goodall became a founding board member of the Nonhuman Rights Project (NhRP), a radical, far-left animal activist organization. [32] [33] Aside from pushing more mainstream animal-rights agendas, including promoting vegetarianism and advocating for increased environmental protections, NhRP has attempted to give great apes, elephants, dolphins, and whales the status of “legal personhood,” which would give animals legal rights similar or equivalent to those of people. [34] The group organizes legislative campaigns and litigation on behalf of animals, filing habeas corpus lawsuits to free animals from captivity out of “respect for their rights.” [35]

In the United States, NhRP has filed several lawsuits securing habeas corpus hearings for four chimpanzees and four elephants. [36] NhRP has aimed to have New York judges rule in favor of recognizing chimpanzees and elephants as legal persons entitled to liberty, which would disallow their being kept by zoos or for research purposes. [37] Goodall provided affidavits in these cases in support of establishing legal personhood for animals. [38]

Aside from her controversial assertions regarding chimpanzees, Goodall has been at the center of several controversies throughout her career. In 2013, the Washington Post revealed that Goodall had plagiarized passages of her book Seeds of Hope from Wikipedia and other sources. [39] Goodall excused the error as the result of “not methodical enough” note-taking while writing the book. [40]