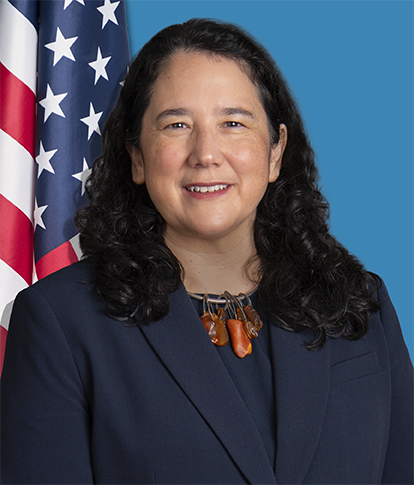 Isabel Casillas Guzman is a Democratic political operative and the head of the Small Business Administration (SBA) in the Biden administration. President Joe Biden appointed Guzman on January 8, 2021, and she was approved by the U.S. Senate on March 16, 2020. She previously worked for the California Office of the Small Business Advocate and for the SBA under President Barack Obama. [1][2]

The SBA is a federal agency which, among other services, provides loans and other support to new and small businesses, which often do not have the credit history and track record necessary to receive loans from private lenders. [3]

From 1998 to 2002, Isabel Guzman worked as the studio manager and managing partner for the visual design studio Miauhaus. From 2002 to 2003, she worked for the office of then-California Governor Gray Davis (D) as deputy appointments secretary. In 2004, she worked as a consultant for the newly-created private equity firm Fortius Holdings. From 2009 to 2014, she worked as the director of strategic initiatives and advisor to the chair at ProAmerica Bank. [4]

In 2014, the Obama administration appointed Guzman Deputy Chief of Staff for the SBA, a position she held until 2017 when former President Donald Trump took office. In 2018, she co-founded the consulting firm GovContractPros, which advised businesses on how to succeed as government contractors, and worked as its director until 2019, when California Governor Gavin Newsom (D) appointed her as director of the Office of the Small Business Advocate. [5][6] In February 2021, shortly before her confirmation to lead SBA, Guzman was quoted in an article for the legal services site LegalZoom in which she argued that Hispanic small business owners needed priority access to resources and small business development assistance. [7]

Isabel Guzman was confirmed as Administrator of the SBA by an 81-17 vote in the U.S. Senate. All opponents of her confirmation were Republicans, including Florida Senators Rick Scott and Marco Rubio, Tennessee Senators Bill Hagerty and Marsha Blackburn, and Arkansas Senators John Boozman and Tom Cotton. [8] The U.S. Chamber of Commerce also supported Guzman’s nomination. [9]

Guzman said that she would make it a priority to address the impact of the COVID-19 pandemic on small businesses, including administering the Paycheck Protection Program (PPP) to provide loans to affected small businesses and independent contractors. Guzman also oversaw and the distribution of grants and indirect support for small businesses included in the economic stimulus bill that President Biden signed in March 2021. [10]

The SBA exists to support small businesses, which it defines as having up to 500 employees. This support often takes place through loans to businesses, including managing the disaster relief funds allocated by the Trump administration during the 2020 coronavirus pandemic. [11] Critics of the SBA, such as the libertarian Cato Institute, have said that the agency engages in affirmative action by setting aside a portion of available funding specifically for minority-owned businesses. The Institute has also argued that the SBA’s government-backed loans enable banks to lend irresponsibly. [12] In 2005, a report by the SBA Inspector General stated that the agency regularly issued loans and other funding to firms that were too large to be reasonably described as small businesses. This included both firms that provided misleading information about their size and those that outgrew the definition of a small business during multi-year contracts with the SBA. [13]

During the COVID-19 pandemic, more than half of the funding intended for small business relief instead went to larger businesses, with 600 firms which exceeded SBA criteria claiming $10 million each – the maximum amount allowed by PPP. [14]

The abortion provider Planned Parenthood also received funds from the program, though the SBA determined that Planned Parenthood did not qualify and demanded that it return the funding. [15] In April 2021, 10 Republican U.S. Senators urged Guzman and other federal officials to investigate Planned Parenthood’s receipt of PPP money. [16]