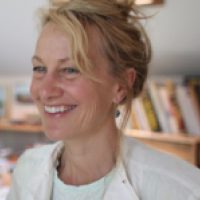 Georgia Nassikas is a Virginia-based artist whose work regularly appears in galleries in Washington, D.C. and Providence, Rhode Island. Several of her pieces have gone to public and private collections throughout the country and abroad. [1] Nassikas specializes in encaustic painting, a technique that is based around combining melted beeswax with select pigments. [2]

Though most of her exhibitions are apolitical, she recently appeared at the right-of-center Cato Institute’s “Freedom: Art as the Messenger” gallery. She has also displayed her artwork at environmentalist exhibitions, including the Encaustic Art Institute’s “Global Warming is Real” gallery and at one of Rhode Island’s Save the Bay Bay Centers. [3]

Outside of art, she holds board positions for the Potomac Conservancy, the Woods Hole Research Center, and the Amazon Conservation Association. [4]

She is the daughter of late U.S. Senator John H. Chafee (R-RI) and the brother of former Rhode Island Governor Lincoln Chafee (D-RI). [5]

Georgia Nassikas was born to U.S. Senator John H. Chafee (R-RI) and his wife, Virginia Coates Chafee. She is one of six children: four sons and two daughters. [6] Her only sister, Tribbie, was killed in a horse-riding accent during their childhood. [7]

Nassikas graduated from St. Mark’s School, one of the New England “Saint Grottlesex” boarding prep schools, historically known for sending its graduates to prestigious universities. She then attended and graduated from Illinois’ Lake Forest College, later obtaining a professional certificate in interior design from the now-closed Chamberlayne Junior College in Boston. [10]

Nassikas began her career as a design assistant with the architectural firm of Rust, Orling & Neale of Alexandria, Virginia. [11]

She has said that she was inspired to take up her signature encaustic work because of renowned painter Jasper Johns, whose paintings she saw at the National Gallery. [12] Encaustic painting, which involves beeswax, allowed her to put to use the bee colonies she fostered at her home. [13]

In 2019, Nassikas donated $1,000 to Pete for America, a PAC supporting South Bend Mayor Pete Buttigieg’s campaign for the Democratic Presidential nomination. She also donated $2,700 to U.S. Rep. Don Beyer (D-VA), the representative for her Congressional district. [15]

Nassikas and her husband, John Nassikas, live in McLean, Virginia. John Nassikas is a partner at the Washington, D.C.-based law firm Arnold & Porter. They have four children. [16]