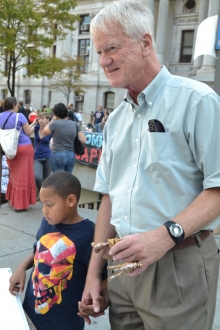 George Lakey is a professional left-progressive activist who has organized protest movements in the United States for the last fifty years. Lakey built protest movements in the United States between the 1960s and 1980s primarily to advocate against the Vietnam War and support LGBT issues. Lakey eventually expanded his activism work abroad on a large array of issues in South Africa, Sri Lanka, Bangkok, and other countries. Since the 1990s, Lakey has primarily focused on training left-of-center activists, and he has led over 1,500 activist training seminars on five continents. [1]

Lakey has worked with Choose Democracy organizing online training seminars to prepare American voters to launch a nonviolent resistance against President Donald Trump if he loses the 2020 presidential election and refuses to leave office. [2]

George Lakey was born in Bangor, Pennsylvania to a slate-mining family. At age 12, he attempted to become a preacher and gave his first sermon on racial inequality. [3]

Lakey attended Cheyney University in Pennsylvania and later studied at the University of Oslo in Sweden. At the University of Oslo, Lakey joined the Quakers and embraced philosophical pacifism. He also married Berit Mathiesen, with whom he later adopted children. When Lakey’s reputation as an activist grew in the 1970s, Lakey came out publicly as gay and briefly lost support in the left-of-center organizing movement. [4]

Cheney would later attend the University of Pennsylvania. [5]

Lakey was active in the civil rights movement throughout the 1960s. In 1963, Lakey was arrested for the first time during a sit-in in Pennsylvania. [6] The following year, Lakey became  a trainer for Mississippi Freedom Summer, an African American voter outreach group. [7]

In 1966, Lakey co-founded A Quaker Action Group (AQAG), a left-wing anti-war organization. Lakey later traveled to North Vietnam by ship with the group to deliver supplies to the Buddhist anti-war movement in enemy territory. [8]

In 1971, AQAG changed its name to Movement for a New Society (MNS) and became a national network of organizations committed to using nonviolence in serve of left-of-center social and political change. MNS adopted a decentralized leadership structure in which all group decisions were made through consensus, and members often lived in communal homes. The organization supported left-wing goals on environmentalism, nuclear policy, anti-war activity. [9]

In the early 1970s, Lakey organized Campaign to Stop the B-1 Bomber, a campaign to convince the federal government to stop producing the B-1 military plane, which included heavy support from labor unions. In 1977, Congress cancelled further production of the aircraft. [10]

In 1976, Lakey co-founded Men Against Patriarchy, a radical feminist organization which protested against President Ronald Reagan throughout the 1980s. [11]

In 1991, Lakey co-founded Training for Change, a left-of-center activist training group which went on to provide consulting services to activists and other organizations in twenty countries. [12]

In the mid-1990s, Lakey ran workshops sponsored by the African National Congress to promote a peaceful transition of power in post-apartheid South Africa. In 1994, he worked as an unarmed bodyguard for human rights activists in Sri Lanka. [13]

In 2009, Lakey co-founded the Earth Quaker Action Team to lead direct action protests in support of left-of-center environmentalist policy implementation. In 2016, Lakey led a 200-mile walk to protest the removal of a mountaintop in Appalachia for coal mining. PNC Bank ultimately halted the mining operation. In 2018, Lakey was arrested at a protest coordinated by the Power Local Green Jobs Campaign which demanded that a regional energy company subsidize solar panels for low-income residents. [14]

In response to speculations that President Donald Trump will refuse to leave the White House if he loses the 2020 presidential election, left-of-center activist organization Choose Democracy was founded to educate Americans on how to organize a nonviolent movement to restore democratic institutions. Lakey is working with Choose Democracy to run three online training seminars, the third of which received 1,000 attendees. [15]