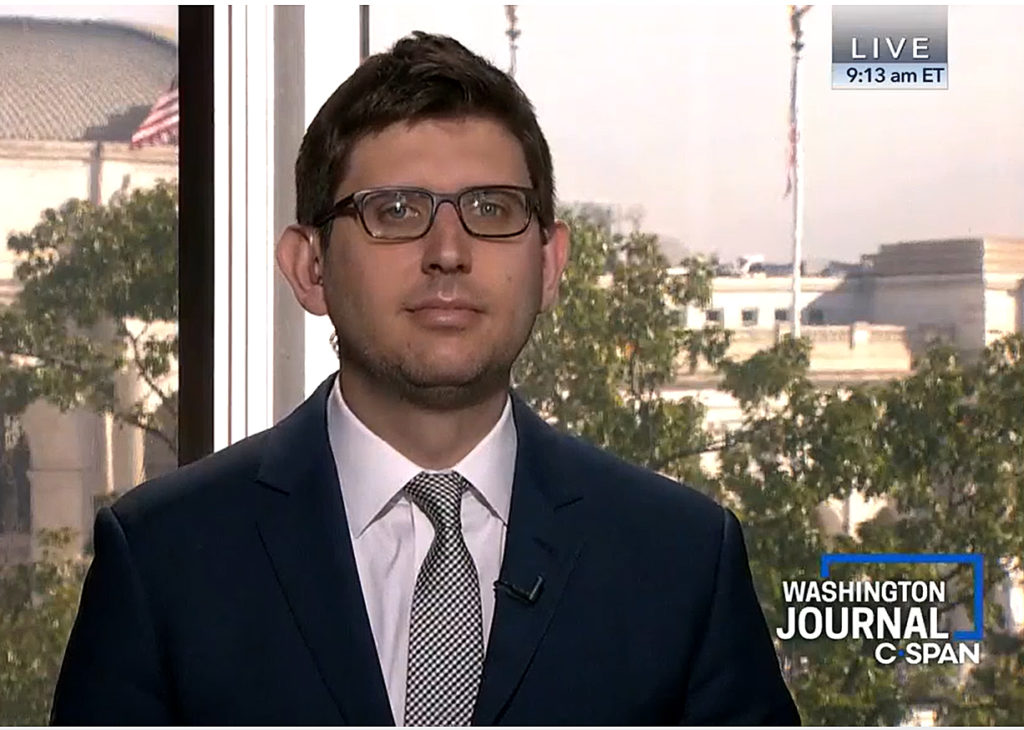 Gabe Roth is a left-of-center judicial policy activist who is runs Fix the Court (FTC), an organization formerly part of the Arabella Advisors network of liberal advocacy groups founded in 2014 to secure liberal control of the United States Supreme Court.

Roth has a master’s in journalism, and his initial work experience was as a local TV reporter and producer in Florida. He has also worked as a communications officer for the State of New York, and the public relations firms Glover Park Group and Rubenstein. Roth later joined the high-powered left-of-center media and communications consultancy SKDKnickerbocker (SKDK). Working alongside liberal operatives personalities Stefan Friedman and Hilary Rosen, SKDK provided media services to several major left-of-center organizations, including the Obama Foundation, Sixteen Thirty Fund, New Venture Fund, and Arabella Advisors.

Gabe Cass Roth was born in 1982 in New Jersey. He attended Washington University in St. Louis from 2000-2004 and received a bachelor of arts in anthropology and then went to Northwestern University from 2005-2006 to get a master’s degree in journalism. [1]

Roth has held several communications positions. He was a reporter and producer at WYCC-TV20 & Medill News Service and First Coast News from 2005-2007. Then he was a television and radio correspondent at 6 News Lawrence, Kansas and WATD-FM in Marshfield, Massachusetts in 2006. Roth then transitioned to working for two public relations firms, the Glover Park Group as a senior associate from 2007-2009, and Rubenstein Associates as an associate vice president from 2011-2012. In between his public relations jobs he worked for New York State’s Department of State as a deputy director of communications and as a spokesman and press officer at New York State’s Executive Chamber from 2009-2010. [2]

Gabe Roth was later made a vice president at SKDKnickerbocker (SKDK), a liberal-aligned media and communications consultancy. [3] SKDK is a contractor that has provided media services to several major left-of-center organizations, including the Obama Foundation,[4] Sixteen Thirty Fund,[5] and the New Venture Fund. [6]

In 2014 Gabe Roth took over Fix the Court (FTC)  as a left-of-center judicial policy advocacy organization under the New Venture Fund arm of the Arabella Advisors network of liberal advocacy groups that seeks significant changes to how the U.S. Supreme Court operates. [7]

FTC additionally seeks enforcement of the group’s nebulous code of ethics,[10] more detailed financial disclosures for judges,[11] requirements that justices must recuse themselves from all publicly owned stocks or investments due to potential conflicts of interest,[12] and live video coverage of all the court’s oral arguments. [13]

As of 2016, Roth had admitted that all of Fix the Court’s funding came from the New Venture Fund, a pass-through funding entity in the Arabella Advisors network criticized as liberal “dark money.” [14]

In advance of the 2018 confirmation hearings of Supreme Court Justice Brett Kavanaugh, Fix the Court and its founder purchased several websites to spread information aimed against his appointment. In October 2018, Roth said, “Three years ago, I bought a handful of URLs that I thought might be useful in any forthcoming Supreme Court confirmation battles. Included were BrettKavanaugh.com, .org and .net.” As of late 2019, the website BrettKavanaugh.com links back to FTC’s website. [15]

Gabe Roth has some strong views on the Supreme Court, and he supposedly surrounds himself with people who are from across the political spectrum that shares his views. He personally claims, “We’ve hired advisers with varied backgrounds, including a former chief of staff to the House Republican Whip, a former regional organizer for the Obama campaign and a former Libertarian consultant. And each week, we work with both Republicans and Democrats in government to advance policies that will open up the federal judiciary.” [16]

Roth bought multiple websites to spread propaganda against the possible appointments of mainly Republican nominees. In an interview with Ann-Derrick Gaillot about buying BrettKavanaugh.com, Roth said, “I waited until after it was down to two or three judges. JudgeGorsuch.com redirects to Fix the Court’s site, but I didn’t do that for everybody. BrettKavanaugh.com, from July 9 when he was nominated up until Monday (Oct. 1) was redirected to FixtheCourt.com.” [17]

Roth told The Hill in 2019: “I think the Democrats have had some catching up to do in terms of making the Supreme Court a hallmark campaign issue.” [18] Roth wrote an article for the National Law Journal in May 2019 that pushes back on the idea that all Supreme Court justices are and should remain non-partisan. Roth disagreed with Chief Justice John Roberts’s response to President Donald Trump’s criticism of “an Obama judge” ruling against an executive order. Justice Roberts said, “We do not have Obama judges or Trump judges, Bush judges or Clinton judges.” [19]

Roth responded saying, “With apologies to Roberts, we expect the justices nowadays to mirror the polarization of our political branches, and that the court does comprise Obama judges and Trump judges, Bush judges and Clinton judges.” [20]