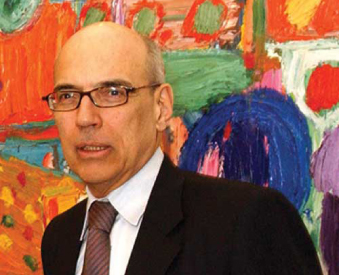 Fred Eychaner is an American entrepreneur and political donor. In 1971, he founded Newsweb Corporation, which prints a variety of newspapers. He is president of the Alphawood Foundation, a Chicago-based charitable organization. The Chicago-based billionaire has been described as “reclusive,” but is well known as a top donor to Democratic Party and LGBT-interest causes.[1]

Typically described as “reclusive” or “secretive,” Eychaner has been actively supporting Democratic causes out of the spotlight. He ranks fifth nationally among lifetime donors to the Democratic National Committee.[2] In the 2016 elections, he was reportedly the fourth-most-prolific political contributor, a status President Barack Obama rewarded by appointing Eychaner to a six-year term on the board of the Kennedy Center.[3]

Fred Eychaner was born to Mildred (Lovett) and Howard Eychaner in 1945. [4] His family was middle class and Methodist. His father owned a small business. Eychaner has three siblings, all younger.

He attended the Medill School of Journalism at Northwestern University. Prior to entering college, he said that he leaned Republican, but he said that his views changed after leaving school. [5] In the late 1980s, he came out to his Republican parents as gay. His parents went on to start a local chapter of Parents, Families and Friends of Lesbians and Gays (PFLAG). [6]

Eychaner earned his wealth from media outlets; first print, and then radio and television. In 1971, Eychaner founded Newsweb Corporation. In 2002, he sold WPWR-Channel 50 in Chicago for $425 million to Fox Television, which generated much of his personal wealth. [7] As of 2017, Eychaner remained chairman of the company; Catherine Danz was named Newsweb CEO in early 2018.[8][9]

In 2004, Eychaner gave at least $3.2 million to Democratic causes and candidates. [10] In the 2008 election cycle, Eychaner originally supported then-U.S. Senator Hillary Clinton (D-N.Y.), but when then-U.S. Senator Barack Obama (D-Illinois) received the nomination, he supported the Democratic nominee. In 2012, he gave $500,000 to President Obama’s reelection effort and $3.5 million to Priorities USA, which also backed Obama. [11]

Despite staunchly opposing the Citizens United decision, Eychaner was the biggest Democratic super PAC donor of the 2012 election cycle, fourth overall among political donors that year from either party. [15] According to the Federal Election Commission, Eychaner’s soft money donations from 2011 to 2015 totaled $22,520,000.

Eychaner is president of the Alphawood Foundation, which awards grants primarily to advocacy organizations for preservation, arts, and promotion of LGBT rights. [16]

Eychaner has also been known to personally give to AIDS research. [17] National Journal reported that Eychaner is the single largest donor to the AIDS Foundation of Chicago. [18]