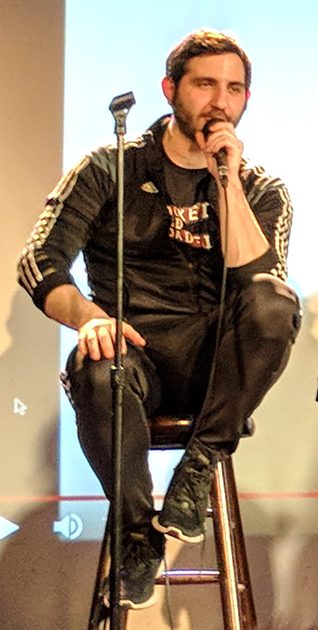 Felix Biederman is one of three co-founders and regular co-hosts of Chapo Trap House (Chapo), a for-profit socialist podcast. As of March 2019, Chapo was reportedly grossing more than $120,000 per month through the website Patreon. [1]

Biederman grew up in the Hyde Park section of Chicago, Illinois, and has said he hated it because it is a “very stratified, snobbish area” full of “well-meaning liberal people that live in this city that is operated by criminals in the Democratic Party.” He credits his experiences growing up in Chicago as formative of his left-wing politics, saying it is “a city born in segregation and inequality and racist policing and murderous extralegal executions” that was from “very early on” a “testing ground for penalizing the poorest people for existing.” He named the late libertarian economist Milton Friedman, a Nobel laureate who once taught at the University of Chicago, as one of the worst people ever associated with the city. [2] [3]

As with all the Chapo hosts, Biederman is sharply critical of mainstream Democrats deemed insufficiently supportive of socialism, in particular Hillary Clinton. In a Chapo parody following Clinton’s loss in the 2016 Presidential race, Biederman declared in faux-Clinton voice: “I may not be Dale Earnhardt… but I smashed into the [expletive deleted] wall because I couldn’t turn left!”[4]

Felix Biederman is one of three co-founders and regular co-hosts of Chapo Trap House (Chapo), a for-profit political podcast from a hard-left, anti-capitalist perspective, that includes coarse language and comedic parody. The other co-founders are Matt Christman and Will Menaker. The three met on Twitter and began podcasting together as Chapo in March 2016. [5] As of March 2019, Chapo was grossing more than $120,000 per month through the website Patreon. [6]

He grew up in the Hyde Park section of Chicago, Illinois, and has said he hated it because it is a “very stratified, snobbish area” full of “well-meaning liberal people that live in this city that is operated by criminals in the Democratic Party who know what should be done to ameliorate the horrors that they see all around them but don’t personally affect them.” [7] He grew bored of the area and says he left as soon as he “figured out how trains work.” [8]

Biederman is a mixed martial arts (MMA) hobbyist[10] and has co-produced documentary films on the history of the sport. [11] He has also been a freelance writer, providing commentary regarding MMA and other subjects for Deadspin and the New York Observer. [12] [13]

Biederman frequently notes his experiences growing up in the Hyde Park area of Chicago, close to the University of Chicago, as pushing his thinking far to the left of mainstream liberalism and Democratic Party ideology.

“Growing up in Hyde Park, you’re surrounded by this environment of meritocratic achievement and cultural liberalism, and from the time I had conscious thought, it kind of disgusted me. It’s a lot of children of U. of C. [University of Chicago] people and other upper-middle-class people talking about being on the waitlist at Brown from the time they’re in seventh grade. And I really didn’t like it at all.”

Biederman describes Chicago as “a city born in segregation and inequality and racist policing and murderous extralegal executions” that was from “very early on” a “testing ground for penalizing the poorest people for existing.” [15] [16]

Beiderman has said that he believes the novel Native Son by author Richard Wright is “one of the best American books ever.” Published in 1940, Native Son is the story of a young black man growing up in poverty and racism in Depression-era Chicago. The man accidentally suffocates a young leftist white woman who has befriended him, and then tries to frame her Communist Party friends for the murder. In a futile effort to evade capture, he ends up brutally killing his girlfriend, and is eventually convicted and sentenced to death. [17] [18]

Biederman told one interviewer that the book “dispels a lot of your illusions growing up as a white liberal in Chicago” and “puts race in America and in Chicago in very unavoidable, uncomfortable terms.” [19] To another, he said it was a key to understanding that mainstream liberals have failed the city:

“You come from this very tony, very well-connected neighborhood, and you hear all the supposedly well-intentioned liberal thought that comes from it, and you read a book like Native Son, and you realize that it’s always been like this. There’s always been this group of people who say, “We’re going to fix Chicago, we’re going to show these people what’s best for them,” and they’ve never really done that. The problems are systemic. A lot of these people would rather appear as if they’re benevolent rather than actually make people’s lives better.” [20]

When asked to rank the “worst people” from Chicago, Biederman cited a Chicago police officer accused of nearly 200 instances of torturing suspects to extort confessions, two Democratic Party machine politicians (former longtime Mayor Richard Daley and Illinois’ current Speaker of the House Mike Madigan), and the late libertarian economist Milton Friedman, a Nobel Laureate who once taught at the University of Chicago. [21]

Master of the Senate, a history of former Democratic President Lyndon Baines Johnson’s years in Congress, and particularly his years as Senate majority leader, is another book Biederman cites as influencing his political thinking. He has said it “doesn’t flinch from showing you what a piece of s–t Johnson” was, and that it shows readers that the Senate is an “aristocratic anachronism.” [22]

As with all the Chapo hosts, Biederman is sharply critical of mainstream Democrats deemed insufficiently supportive of socialism, in particular Hillary Clinton. Biederman also believes the drive to support Clinton because of the fear of Republican nominee Donald Trump demonstrated the failure of mainstream Democratic Party ideology and tactics.

In mid-2017 he said: “All of the practicality and the sacrificing of principles and policies that would have helped a lot of people and engendered a lot of loyalty to the Democratic Party were given up because we were told it had to be done and the worst thing still happened. It’s very hard for people to look at that and go, “Well, I guess we still have to stick to this so-called practicality model!”[23]

On an Election Night 2016 Chapo live broadcast, after it was clear Hillary Clinton would lose the Electoral College, Biederman referenced her health episodes during the campaign, sarcastically telling the audience “if voters are too immature to vote for someone that collapses and vomits all the time, the joke’s on them.” Days later, in a Chapo parody, Biederman declared in faux-Clinton voice: “I may not be Dale Earnhardt… but I smashed into the [expletive deleted] wall because I couldn’t turn left,” a reference to the fatal racing crash of seven-time NASCAR champion Dale Earnhardt, Sr., on the final lap of the 2001 Daytona 500. [24]

He also criticized Clinton supporters: “This [multiple expletives deleted] brought all her donors to have a big party about how great they were. She’s never been a [expletive deleted] leader, ever, in her life. She just has these fans who are psychologically weak, tormented, élite freaks.” [25]

Commenting on the appeal of Chapo, Biederman has said that it “can be very isolating” to advocate for far-left opinions, such as the “brutality of our foreign policy” or the “inefficacy of liberalism’s current form.” He notes the show’s fans often write in to thank the hosts with such praise as “I thought I was the only person who felt this way” and “this keeps me from intentionally smashing my car into a divider on the way to work.” He characterizes his objectives for Chapo as to produce a show for such people that “just makes people’s days easier.” [26]

Biederman has also noted it is particularly gratifying when listeners use information obtained on the show to agitate for policy changes. One example he cites is a student listener who went to see former U.S. diplomat Dennis Ross speak, and then used the opportunity to challenge Ross about American policy toward Saudi Arabia. Biederman says the ability to inspire that behavior in listeners is “better than anything I ever thought I could do in my life.” [27]

Motivating listeners to act is an important objective. He says the animating principle for the show must be more than mere opposition to a particular political force, such as President Trump: “If you build it all around resisting Trump and not about what you’re going to give people, are you going to get them to vote a year from now?”[28]