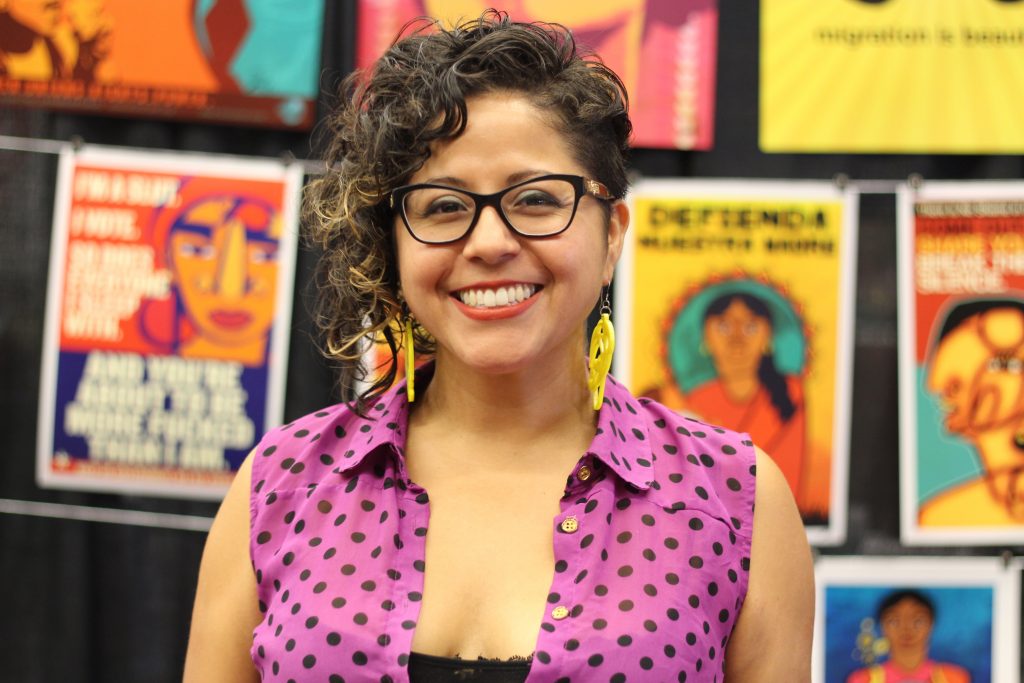 Favianna Rodriguez is an artist and left-of-center social activist. Her initial focus was in supporting immigration and free services to illegal migrants. She has since expanded her art and advocacy to include climate, economic equality, sexual liberation, and women’s rights. [1]

She is co-founder and president of the Center for Cultural Power, a left-of-center organization led by women of color artists focused on activism and community organizing through art, addressing issues of immigration, climate, gender, and racial activism. [3]  It was originally the Citizen Engagement Lab Education Fund, and is associated with CultureStrike and the Citizen Engagement Laboratory. [4]

Rodriguez’s parents immigrated to the United States from Peru in the 1960s and settled in Oakland, California in a largely Latino neighborhood. Her mother was a travel agent and ran a bilingual phone service for medical clinics. Her father was a dental technician and did janitorial work. Rodriguez was born on September 26, 1978. [5] She identifies herself as a “first generation American Latinx with Afro-Peruvian roots.” [6]

Rodriguez became involved in art and politics in her high school years in California, joining other Latino activists. When California introduced Proposition 187, which sought to prevent undocumented immigrants in California from receiving government-provided social, health, and education services, Rodriguez organized walkouts and posted flyers that she designed in protest. [7]

Rodriguez would attend University of California, Berkeley, majoring in architecture and ethnic studies. She continued to create political art to share at rallies and around campus, but left Berkeley before obtaining her degree. [8]

From 2000 to 2006 Rodriguez was co-founder and director of EastSide Arts Alliance and Cultural Center, [9] an organization of artists and activists of color in the Oakland area advocating for left-progressive social change. [10]  During this time Rodriguez also started Tumis Inc., a bilingual graphic design studio. [11]

In 2003 Rodriguez co-founded Taller Tupac Amaru, [12] an Oakland based artists’ collective that uses screen printing as a tool for political activism. [13]

In 2008 she was hired by the Citizen Engagement Laboratory to launch Presente.org, which is a national left-of-center online organizing network focused on building political power for left-progressives in the Latino community, [14] advocating for more lenient immigration policies and stronger political action among Latinos. She continues as a senior advisor for Presente.org as of early 2022. [15]

In 2011 Rodriguez co-founded CultureStrike, a left-of-center arts organization focused on migrant rights. [17] She has been executive director since 2011. [18] CultureStrike is a network of migrant artists that identifies and shares opportunities to develop their work and political power through art. [19]

Rodriguez is co-founder and president of the Center for Cultural Power. [20] Founded in 2019, it is a left-of-center organization led by women of color artists focused on activism and community organizing through art, addressing issues of migration, climate, gender, and racial activism. [21] It was originally the Citizen Engagement Lab (CEL) Education Fund and builds on the foundations of CultureStrike and the CEL.

Rodriguez is a member of the Justseeds Artists’ Cooperative, which is a group of artists whose art focuses on political and environmental activism. [22]

Rodriguez is a board member of environmentalist advocacy group Solutions Project. [23]

Much of Rodriguez’ early work was centered on immigration, then she expanded to include sexual openness and reproductive rights. [24] As of this writing, she has over 900 pieces of art on her website, Favianna.com, spanning 2008 to 2022. [25] Her major topics include immigration, global warming, economic equality, sexual liberation, and women’s rights. [26]

One of Rodriguez’s well-known projects is Migration is Beautiful, featuring a monarch butterfly representing the immigrants’ right to travel freely across borders. [27] She presented this at the Smithsonian Asian-Latino Pop-Up Museum in 2013. [28]

In 2013 Rodriguez participated in a three-part YouTube documentary produced by Pharrell Williams entitled Voice of Art – Migration is Beautiful. Much of her work as of this documentary centered on supporting illegal immigrants. [29]

In 2015 Rodriguez hosted art workshops at a global feminist gathering for the Global Fund for Women, which also commissioned her to produce two works of art. [30]

In 2017 she was awarded a grant to develop pro-migrant artworks on public transit in Oakland, California, in partnership with left-of-center Power California, [31] formerly known as Mobilize the Immigrant Vote. [32]

In 2018 Rodriguez designed the artwork on the label of Ben & Jerry’s “Pecan Resist,” a limited edition politically motivated anti-Donald Trump ice cream that was released just ahead of the 2018 midterm elections. [33]

Rodriguez co-founded 5050by2020.com, with television producer Joey Soloway [34] (previously Jill Soloway) who is best known for the creation of the Amazon series Transparent. [35] 5050by2020.com was a trans and nonbinary artists’ support network and an activist program of left-of-center women’s advocacy organization Time’s Up. [36]

Rodriguez has been a frequent speaker on her art and activism at art schools, museums, and grantmaking foundations such as left-of-center Ford Foundation and Leeway Foundation [38] which supports women and trans artists whose work is meant to produce a social impact. [39]