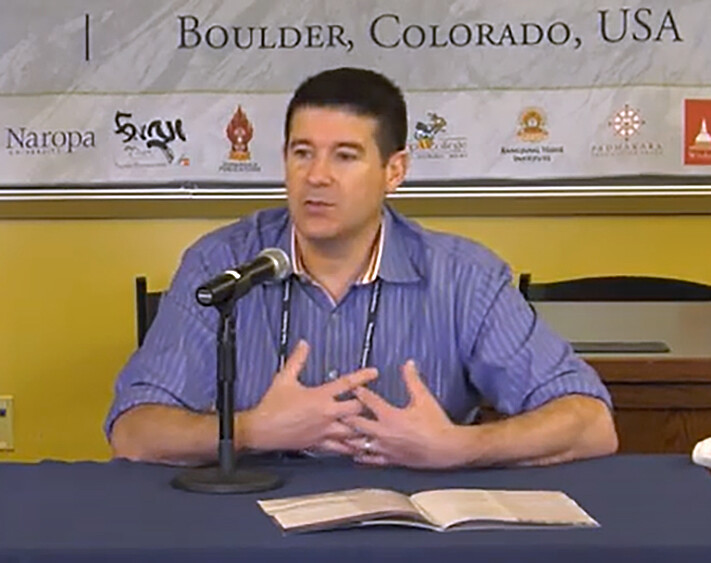 Eric Colombel is the husband of Andrea Soros Colombel, the daughter of financier and liberal political donor George Soros. He is the president and founder of the Tsadra Foundation,[1] a nonprofit organization which funds the study and practice of Tibetan Buddhism in the west. [2] He is also a trustee of the Trace Foundation, a grantmaking organization founded by Andrea Soros Colombel which supports the preservation and development of Tibetan culture, economy, and environment.

According to his Tsadra Foundation biography, Eric Colombel is French but lives in the United States. [3] He began learning about Buddhism at the age 17 and studied at the National Institute for Oriental Languages and Civilizations in Paris and at various Buddhist centers. He also attended college in Paris and studied information technology. He helped develop the digital architecture for the Asian Classics Input Project. [4]

When Chelsea Clinton, the daughter of former President Bill Clinton and former Secretary of State Hillary Clinton, got married in Rhinebeck, New York, in 2010, Bill and Hillary Clinton stayed at Glenburn, the Rhinebeck mansion of Eric and Andrea Colombel. [5]

In 2015, Eric and Andrea Colombel sold their Greenwich Village townhouse in New York City for $20 million. The couple previously purchased the home in 2006 for $11.5 million. [6]

In 2020, a lawsuit by WG Project Management alleged that Eric and Andrea Colombel withheld construction payment in retaliation for the contractor’s refusal to perform illegal work on one of their New York City properties. The plaintiff also accused the couple of breach of contract, unjust enrichment, conspiracy to commit fraud, and $435,000 in damages. [7]

Along with Andrea Soros Colombel, Eric Colombel is a co-founder and early funder of the Acumen Fund, a non-profit “impact investment fund” that makes equity investments in early-stage companies that provide products or services to the poor in the developing world. [18]

Eric and Andrea Colombel also financially support the Oriental Institute of the University of Chicago, the university’s interdisciplinary research center for Ancient Near Eastern studies. [20]

Colombel has given thousands of dollars to Hillary Clinton over the years, both for her 2008 presidential bid and her 2000 bid for U.S. Senate. [23]

Combined, Eric Colombel and his wife have given more than $300,000 in individual contributions to Democratic candidates and liberal organizations since 1999. [25]