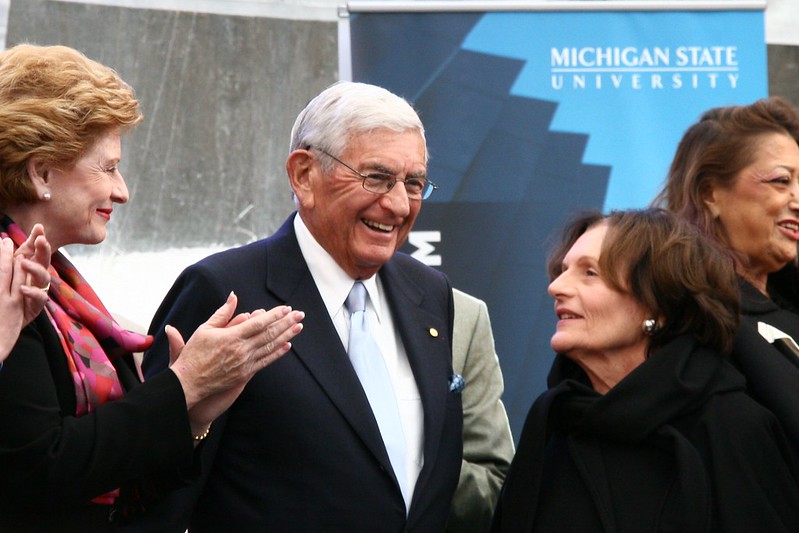 Eli Broad made two fortunes in home building and insurance and used his wealth to create the Eli and Edythe Broad Foundation, which supported education reform, funded medical research, and acquired art for the Los Angeles-based Broad Art Museum.

Eli Broad was born in Detroit in 1933.  After graduating from Michigan State and obtaining his C.P.A., Broad teamed up with Donald Kaufman, who was married to his wife’s cousin, and in 1957 started Kaufman and Broad (now KB Homes) and moved to Los Angeles. His insight was that by eliminating basements, he could build three-bedroom homes for under $14,000. He told Vanity Fair in 2006 that “vets could move in for, like, 300 bucks. My idea was if they could move out of garden apartments into three-bedroom houses for less than rent and have equity and the tax benefits. It worked.” [1]

By 1960, Kaufman and Broad had built thousands of homes, first in Detroit, then in the suburbs of Los Angeles and Phoenix. Broad became a millionaire. [2]

In 1971, Kaufman and Broad bought Sun Life, renaming the company SunAmerica and focusing the company’s business on selling retirement annuities. In 1989, the firm sold the housing business and became entirely an insurance company. [3]  In a 1997 Fortune profile, Broad said his employees should be prepared to work long and hard and said  “we like tennis players around here” because tennis took up one hour while golf took all day, time that could be spent working. [4]

In a 2013 interview in Philanthropy, Broad said he saw himself as an “investor” who actively sought out recipients of his aid rather than passively waiting for grant proposals. [6]  He said he used three criteria in making his grants:

Will it happen without us? If it won’t, we invest. Will it make a difference 20 or 30 years from now? If it will, we invest, Is there leadership in place to make it happen? If so, then we invest.

Broad said the third test “really is crucial in education philanthropy,” because he looked at “the governance and management” of a district to see if a district “would support dramatic school improvement.” [7]

In a 2013 interview with Bridgespan, Broad said, “I do not believe in foundations in perpetuity” and said in many cases, perpetual foundations end up with trustees the donors have “never met” and “go off in different directions” from what the founder wanted.  He said that while his foundation planned to endow several projects, “ten years after we’re gone, we ought to be out of business.” [8]

Broad supported education reform, with a strong emphasis on expanding charter schools.  In a 2011 article in the left-wing publication Dissent, Joanna Barkan said that the Broad Foundation, along with the Gates and Walton Family Foundations, were “working in sync” to support “market-based goals for overhauling public education,” and that school superintendents who attended the Broad Superintendents Academy or mid-career professionals picked by the Broad Residency for further ”professional development” would ”naturally favor other Broadies, which ups the leverage” the Broad Foundation allegedly had over public schools.” [9]

In 2019, striking Los Angeles public school teachers, wearing red, picketed the Broad Art Museum, denouncing Broad as a “billionaire privatizer” who, in 2017, funded candidates for the city’s school board who favored converting half of the city’s public schools to charters. [10]

Broad was a lifelong Democrat who successfully persuaded the Democratic Party to hold its 2000 convention in Los Angeles. However in 1972, he led the Democrats for Nixon effort because he feared Democratic presidential candidate Sen. George McGovern (D-SD) would not resist Soviet aggression. [11]

In 2017, he opposed the nomination of Betsy DeVos to be secretary of education in the Trump administration, claiming that DeVos was “unprepared and unqualified” and adding that while he supported charter schools, he opposed vouchers for private-school attendees. [12]

In 2019, Broad called for the creation of a national wealth tax, stating that this new tax “can start to address the economic inequality eroding the soul of our country’s strength. I can pay more, and I know others can too.” [13]