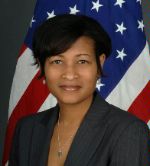 Cheryl Mills is an attorney, a longtime counselor to the Clinton family, and the founder and CEO of BlackIvy Group, a company that builds businesses in Africa.

Mills first began working with the Clintons in 1992 when President Bill Clinton was elected. Mills rose to prominence in 1999 when she worked on President Clinton’s defense during his impeachment trial. Soon after, she turned down the role as head counsel for the White House and entered the private sector. In 2009, Mills became a top advisor to then-Secretary of State Hillary Clinton.

Cheryl Mills was born in 1965. Her father was a lieutenant colonel in the U.S. Army, and Mills grew up on military bases in Belgium, Germany, and the United States. [1]

Mills received a B.A. from the University of Virginia, and a law degree from Stanford Law School. [2]

After graduating from law school, Cheryl Mills briefly worked at the law firm Hogan and Hartson in Washington, D.C. [3]

In 1992, Mills moved to Little Rock, Arkansas to work for the transition team of incoming President Bill Clinton. [4]

Mills worked as a legal counsel to the Clintons for seven years and “developed a reputation as extremely tough, extremely loyal and a leading figure in the give-no-ground camp in the White House.” She was named deputy counsel in 1997, and acting counsel in 1999. [5] She was offered the counsel role permanently but declined it. [6]

In 1995, Mills defended the Clintons during the Whitewater affair, in which the presidential couple was accused of involvement in criminal conduct regarding a real estate deal. Shortly before U.S. Senate hearings, Mills’s car was broken into and a gym bag containing legal notes pertaining to the Whitewater case and the siege in Waco, Texas were stolen. [7]

Mills gained national attention for her work in defending the Clintons during the Monica Lewinsky scandal, particularly her advocacy on President Clinton’s behalf in January 1999 during his impeachment trial in which Mills, an African American, defended Clinton’s record on civil rights. [8]

After turning down the role of lead counsel in the Clinton White House, Mills took a break from law to serve as senior vice president for corporate policy and public programming at Oxygen Media. [9]

In 2009, Cheryl Mills was appointed counselor and chief of staff to then-Secretary of State Hillary Clinton. After thousands of private emails from Secretary Clinton went public in 2015, an article by Politico called Mills “the only person who says no to Clinton,” noting both Mills’s friendly demeanor with Clinton and her blunt honesty. [11]

In October 2015, the Washington Post reported that during her first four months working in the U.S. State Department, Mills continued to work part-time for New York University as a consultant. In this role, Mils negotiated the construction of a new NYU campus in Abu Dhabi with the government of the United Arab Emirates. NYU paid Mills $198,000 in consulting fees, and an additional $330,000 in vacation and severance payments upon leaving the position. When interviewed by the Washington Post, Mills stated that her work was approved by the State Department there was no conflict of interest. [12]

Mills was scrutinized in 2015 and 2016 during the Clinton email scandal in which Secretary Clinton was found to have used a private email server in violation of federal transparency regulations. In 2015, the Federal Bureau of Investigation ordered Mills to turn over all her work emails for the investigation. Afterward, under advice from her attorney, Mills deleted her work emails. [15]

In 2016, Mills was questioned as a friendly witness by the FBI regarding Secretary Clinton’s use of a private email server in exchange for partial immunity from prosecution. Mills defended the Secretary’s conduct, but Mills and her attorney briefly left an interview after being asked questions about email procedure within the State Department that the FBI and Mills had agreed were off limits. [16] [17]

In May 2016, Mills asked a judge to limit the public release of her deposition video. [18]

In October 2016, Clinton emails leaked by Wikileaks revealed a March 2015 email chain in which Mills told Clinton presidential campaign chairman John Podesta that President Barack Obama knew about Secretary Clinton’s private email server from a news report. Mills told Podesta, “We need to clean this up—he has emails from her—they do not say state.gov.” Then-presidential candidate Donald Trump (R) publicly referenced Mills’s email as evidence that President Obama may have known about Clinton’s use of a private email server. [19]

Cheryl Mills is the founder and CEO of BlackIvy Group, an investment fund that develops infrastructure in Africa. In 2016, the company was financing projects in Tanzania and Ghana, the two African countries supported by “Partnership for Growth,” an initiative promoted by Secretary Clinton and the Obama administration. [20]