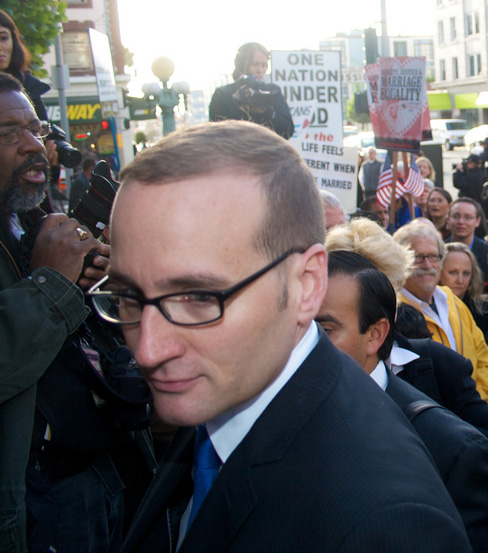 Chad Griffin is a career left-of-center activist who has played a key role in the national lesbian, gay, bisexual, and transgender (LGBT) activist movement. He was the president of the Human Rights Campaign (HRC), the leading LGBT pressure group in the United States and an influential player in mainstream Democratic Party politics. He started his political career as a junior staffer in the White House of President Bill Clinton. He was also a top fundraiser for the re-election campaign of President Barack Obama and has worked in a private capacity for various left-of-center causes as a consultant and strategist. [1]

While Griffin was a prominent public supporter of President Obama, he also criticized Obama for his allegedly insufficient support for the LGBT agenda throughout his time in office. In addition to his management of the HRC, Griffin was a co-founder of the American Foundation for Equal Rights (AFER), another group that was launched in order to challenge California’s Proposition 8, the state’s ballot initiative that would limit state recognition to opposite-sex marriage, in litigation. [2]

Griffin stepped down from his position as HRC president in 2019. [3] In February 2022, he was named in a lawsuit by his successor Alphonso David, who claimed that the leading left-wing activist group underpaid and ultimately fired him for his race. David alleged that the organization mistreated its ethnic minority employees during Griffin’s tenure and that HRC was more supportive of Griffin when scandals broke than they were of David when he found himself dealing with controversies. [4]

Chad Griffin began his career in left-wing politics in the office of Clinton administration press secretary Dee Dee Myers. He went on to provide advisory services to left-wing activists and organizations, co-founding the consulting firm Griffin-Schein and working with other influential political strategists such as Kristina Schake, who went on to work as the communications director for First Lady Michelle Obama. Griffin himself would also go on to become an ally of the Obama administration, helping raise funds for Obama’s re-election bid. In 2009, Griffin co-founded the American Foundation for Equal Rights to litigate against California’s successful ballot initiative to prohibit state recognition of same-sex marriages. The amendment was ultimately struck down by the courts. [5]

Chad Griffin was named president of the Human Rights Campaign in March 2012, replacing Joe Solmonese, who had accepted an appointment as the national co-chair of the Obama 2012 Presidential Campaign the prior month. Griffin remained on the board of the American Foundation for Equal Rights after assuming leadership of the HRC. [6]

In addition to being an Obama donor bundler, Griffin was a widely cited advocate for LGBT rights related to the 2012 presidential election. [7] He and other LGBT advocates put significant pressure on the Obama administration to reward LGBT advocacy and donations with important appointments after Obama won his second term. [8] During the Trump administration, Griffin criticized President Donald Trump’s daughter, Ivanka, for sending a Tweet favoring LGBT rights. Griffin said the Tweet was “a PR attempt” that didn’t live to up to being an “ally” of LGBT advocates. [9]

Griffin also called then-Vice President Mike Pence, a socially conservative politician, “one of the greatest threats to equality in the history of our movement” in 2018. [10]

For more on the organization, see Human Rights Campaign.

As the leading LGBT pressure group in the United States with deep ties to the Democratic Party, the HRC backs a wide range of left-wing legislation in addition to LGBT normalization policies. These include: [11]

The organization also backs a variety of proposed laws which would mandate that taxpayer-funded health insurance programs cover certain treatments often sought by LGBT individuals, as well as bills that would bar coverage of therapy for same-sex attraction which the LGBT movement opposes. This includes mandating that the United States armed forces provide gender transition services. [12]

In addition to its strong ties with the establishment political left, the HRC relies on some of the most influential corporations in the United States to fund its pressure campaigns. The organization lists the retail giants Amazon, Target, and Macy’s, the tech firms Apple, Google, Intel, Microsoft, and the defense contractors Raytheon Technologies and Northrop Grumman among its “platinum partners.” [13]

Perhaps the most significant success of HRC and other LGBT movement activism was the 2015 Supreme Court ruling Obergefell v. Hodges, which resulted in state recognition of same-sex marriages nationwide and occurred during Griffin’s time as president of the organization. Griffin personally supported plaintiff Jim Obergefell and celebrated the decision in an article for the leading LGBT-interest publication Advocate. Griffin also called for the movement to escalate its pressure campaigns at both the national and state levels to oppose remaining legislation privileging opposite-sex marriage and granting the right to favor opposite-sex relationships in private business, the workplace, and the education system. [14]

According to the HRC, its membership doubled from approximately 1.5 million to more than 3 million during Griffin’s tenure. The organization also increased revenue from under $30 million annually in 2011 to over $45 million in 2018. [15] Griffin initiated a major pressure campaign to advance the LGBT agenda in southern states such as Mississippi, Alabama, and Arkansas, as well as a program to expand the organization’s activism around the world. In November 2018, the HRC announced that Griffin would be stepping down the following year. [16]

Griffin was succeeded as president of the HRC by attorney and career left-wing legal activist Alphonso David. [17]

After replacing Griffin, David ran the HRC for approximately two years but was fired in September 2021. His termination followed the release of a report by the New York state attorney general’s office which revealed that David had provided consulting services to former New York Governor Andrew Cuomo (D) after Cuomo was accused of sexual misconduct while in office. In February 2022, David filed a lawsuit against HRC, claiming that the organization had systematically discriminated against him and other racial-minority employees for years. The lawsuit specifically identified Griffin as failing to respond to this alleged mistreatment and claimed that the HRC board had backed Griffin when these allegations surfaced while firing David for his own involvement in a controversial incident. [18]

Griffin has kept a relatively low profile since leaving Human Rights Campaign, though he was a bundler for President Joe Biden’s 2020 presidential campaign. [19] [20] In 2021, he described Biden as the “most pro-equality president we have ever had,” despite past votes against LGBT advocates’ priorities, such as overturning the Defense of Marriage Act. [21]