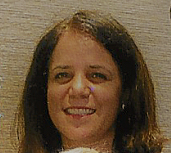 Ahsia Badi is the Census Director of Emgage, a Muslim-American advocacy and voter mobilization group. As such, she campaigns at both the local and state levels to maximize Muslim participation in the 2020 Census. Badi partners with community organizations, mosques, and cultural institutions.. [1] She is also a local Democratic Party official in New York City, serving as president of the Samuel J. Tilden Democratic Club. [2]

Badi was a panelist at a community forum hosted by South Asians For America (SAFA), the focus of which was the discussion of “unconventional paths” to elected and appointed office. [3]

Badi was a participant in the Muslims for American Progress (MAP) Project, “Faces of Muslim New Yorkers,” designed to educate the public about the contributions of American Muslims. The MAP Project is a project of the Institute for Social Policy and Understanding,[5] an American Muslim non-profit research organization. [6]

Badi is a former Senior Policy Associate at the New York Academy of Medicine, and currently serves as the Chairman of the Board of the Islamic Learning Center of NYC. [7]

Badi is a member, and has served on host committees of, the Muslim Democratic Club of New York, an American Muslim organization helping elect Democrats to local office in New York. [9]