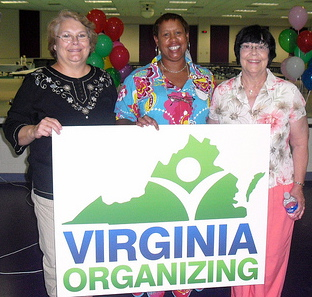 Virginia Organizing is comprised of fifteen regional chapters that coordinate civic engagement, and direct action on both local and state levels. [2] Virginia Organizing, and all of its chapters, support the Affordable Care Act (Obamacare), tax increases on Virginians, an aggressive interpretation of LGBT rights, and liberal expansionist immigration reform, among other left-of-center issues. [3]

Virginia Organizing has over a dozen partner organizations, and VO collects donations for many of these groups, some of which do not have their own non-profit status. [7]

Virginia Organizing states that it is “dedicated to challenging injustice by empowering people in local communities to address issues that affect the quality of their lives.” [8] The organization supports the Affordable Care Act (Obamacare), progressive tax reform in Virginia, LGBT rights, and immigration reform, among other issues. [9]

Virginia Organizing is comprised of fifteen regional chapters that coordinate civic engagement, and direct action on both local and state levels. [10]

Virginia Organizing collects donations on behalf of its partner organizations like Alliance of Nurses for Healthy Environments, Center for Sustainable Communities, and Virginia Coalition of Latino Organizations (VACOLAO), as well as for non-partner activist organizations like Protect Our Water, Heritage, Rights (POWHR). [12]

Executive director Brian Johns formerly worked as the organizing director for Virginia Organizing, and was a community organizer with labor unions in Pennsylvania. [17]

Regional organizer Joe Szakos was the founding executive director of Virginia Organizing until 2017 as well as the founding coordinator of Kentuckians For The Commonwealth. Szakos is the co-author of We Make Change: Community Organizers Talk About What They Do—and Why. [18]

Regional organizer Meghan McNamara is a community and labor organizer, who formerly worked on liberal social and economic policy campaigns in Washington DC, Chicago, and Virginia. McNamara is the former Richmond Canvass Director for MoveOn.org during the 2008 elections. [19]

Chairperson D. Ladelle Mcwhorter has been with Virginia Organizing for over 20 years, working on campaigns that include Medicaid expansion and environmentalist issues. [21]

Janice Johnson is a former chairperson, and treasurer of the board. [23]

Former members of the board include Vice-Chairperson Debra Grant, Marty Jackson, and Natasha D’Souza. [25]