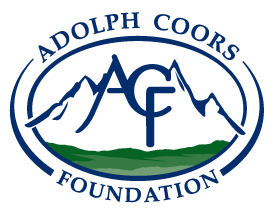 This is a logo owned by Adolph Coors Foundation for infobox. (link)

The Adolph Coors Foundation is a family foundation overseen by members of the Coors brewing family. It supports charities in Colorado and center-right advocacy organizations.

The Adolph Coors Foundation was founded in 1975 by brothers Joseph and William Coors from the estate of their father, Adolph Coors II. [1]

In a 2021 interview with the Philanthropy Roundtable, foundation executive director Carrie Coons Tynan (a granddaughter of Joseph Coors) said that the eight members of the foundation board are all members of the Coors family and “our national grantmaking comes from Joe Coors and his passion for the national policy landscape.” She added that the foundation looks at grants “through the lens of donor intent. Bill and Joe Coors started this foundation. We have to make sure we’re honoring their legacy.” [2]

In 1990, the Coors Foundation donated $5 million to the University of Colorado Foundation, which renamed the university’s indoor sports arena the “Coors Events Conference Center.” At the time, the grant was the largest received by the university. The university student government declared that student groups could not receive money from Coors Brewing for fundraisers. [4] In November 1990, students voted by a 4-1 margin to support renaming the facility and rejected a ban on sales of Coors beer on campus by a margin of 2,840-1,880. [5]

In 1993 the Coors Foundation split, with national grants transferred to the Castle Rock Foundation. [6] Castle Rock continued to make grants to center-right groups; the New York Times noted in 2001 that Gale A. Norton, who served as Secretary of the Interior in the George W. Bush administration, was affiliated with groups, including the Mountain States Legal Foundation and Political Economy Research Center, that received $100,000 from Castle Rock in 1999. [7]

Coors Foundation president Peter Coors is vice chairman of the board of trustees at the American Enterprise Institute, which received $175,000 from the Coors Foundation in 2019. [9] The largest grants made by the Coors Foundation in 2019 were to the Western Stock Show Association ($500,000), the Center for American Liberty ($400,000), and the Susan Samueli Center for Integrative Medicine at the University of California, Irvine ($360,000). Other center-right entities receiving grants of over $100,000 include the Emergent Order Foundation and Hillsdale College. [10]