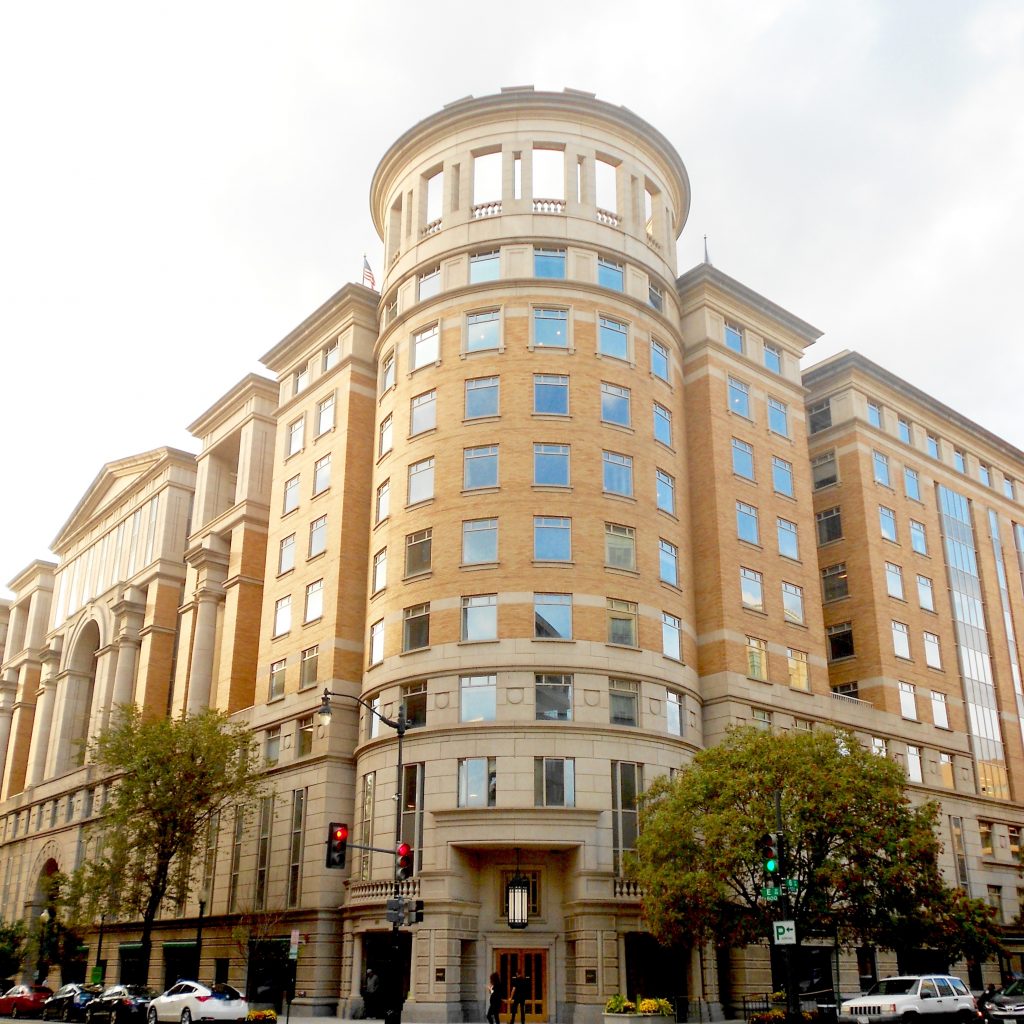 AARP, formerly the American Association of Retired Persons, is a lobbying group that engages in lobbying at the state, local, and federal level on a range of issues affecting older adults. AARP also has extensive business interests, including in health insurance and brand licensing. [1] AARP claims 38 million members, making it the largest interest group in America. [2]

AARP is generally considered to be left-of-center. [3][4] It is a frequent supporter of left-leaning health care policy and has resisted Republican efforts to reform entitlement programs such as Social Security. [5] AARP describes itself as “a champion for social change” with an “ambitious social agenda.” [6]  More than 98 percent of the political donations made by AARP staff in 2016 and 2018 went to Democratic candidates and affiliated groups. [7]

AARP, the nonprofit entity, is the parent organization of two for-profit wholly owned subsidiaries, AARP Services, Inc. and AARP Financial,[8] which generate revenue from insurance products, marketing deals, and other products and services offered to members. [9]

AARP was founded in 1958 by Ethel Percy Andrus, a retired educator from California. It evolved from the National Retired Teachers Association (NRTA), which Andrus had established in 1947 in part to promote health insurance for retired teachers. [11]

Instrumental in AARP’s evolution from the NRTA was Leonard Davis, the founder of the Colonial Penn Group of insurance companies. [12] [13] “60 Minutes” reported in 1978 that Davis devised AARP as a marketing device for his insurance business after he met Ethel Percy Andrus in the late 1950s. Davis then ran AARP until the 1980s, promoting its image as a non-profit advocate of retirees in order to sell insurance to members. [14]

The association’s explosive growth came under Cyril F. Brickfield, who took over in 1967 when the group claimed one million members. Under Brickfield, AARP lowered its eligibility age in 1984 to 50 from 55, causing membership to grow rapidly. By the time Brickfield stepped down in 1987, membership was claimed at 28 million. [15]

Membership also grew as the U.S. population steadily aged in the latter decades of the 20th century. Horace B. Deets, AARP’s executive director for much of the 1990s, told an interviewer, “The demographics are on our side.” [16]

In 1994, AARP settled a dispute with the IRS over its business income through insurance sales, paying $135 million in back taxes and penalties. [18] As part of the settlement, AARP also spun off a commercial subsidiary, AARP Services Inc., to house its insurance businesses and grow its other service offerings. Steve Zaleznick, AARP’s general counsel from 1990 to 1997, was named chief executive of the new for-profit subsidiary. [19]

AARP also came under fire for its receipt of large federal grants while it continued to expand its lobbying operations. In 1995, AARP received $86 million in federal funding even while it played a major role in stopping a Republican-sponsored Medicare reform plan in Congress. That same year, Congress passed the Lobbying Disclosure Act of 1995, making organizations like AARP that engage in lobbying ineligible to receive federal funds.

In response, AARP in 1996 established another subsidiary, the AARP Foundation, as a charity that does not engage in lobbying, thus making it eligible to receive government grants. [20] It has continued to take in tens of millions of dollars in grants every year. Charlie Jarvis, Chairman and CEO of USA Next, estimated that between 1989 and 2005, “AARP appears to have taken over a billion dollars in taxpayer money in the form of federal grants.” [21]

In 1999, the U.S. Postal Service fined AARP $5.6 million for mailing millions of solicitations for commercial insurance using the nonprofit rate rather than the commercial rate for postage. [22]

Expansion of Membership Base

The acronym “A.A.R.P.” originally stood for the American Association of Retired Persons, but in 1999 the organization officially changed its name to “AARP”, to reflect that its membership and focus were no longer exclusive to retirees. [23] AARP changed its membership requirements to do away with all age restrictions, making it possible to gain full membership at any age to take advantage of AARP-negotiated discounts for travel, dining, entertainment, and shopping. [24]

In 2014, Jo Ann Jenkins was appointed AARP’s CEO. She was previously the chief operating officer of the Library of Congress and the president and COO of the AARP Foundation. [25]

AARP currently has interests in insurance, lobbying, media, travel, charity, real estate, and more. Dale Van Atta, a journalist who has investigated the organization, says AARP is “really a Fortune 500 company that sidelines as a lobbying organization for the Washington staff.” [29]

The largest share of AARP’s income comes from royalty fees. [30]

In 2017, according to AARP’s consolidated financial statements, the organization took in $908 million from royalties for the rights to use AARP’s intellectual property, paid by commercial providers of products, services, and discounts for AARP members. Meanwhile, AARP also brought in $301 million from membership dues, $147 million from publication advertising, $99 million in grant revenue (mostly from the U.S. government), and $116 million from independent contributions, contributing to a total operating revenue of 1.6 billion. [31]

AARP’s business interests are often the subject of controversy. In 2011, the House Ways & Means Committee issued an investigative report titled, “Behind the Veil: The AARP America Doesn’t Know” that calls attention to the group’s lucrative business dealings. [32] Then-U.S. Representative Wally Herger (R-CA), a coauthor of the report, stated, “The facts show that AARP no longer operates like a seniors’ advocacy organization. Instead it more closely resembles a for-profit insurance company.” [33]

AARP has a long history of lobbying at the federal, state, and local levels, though the totals it has spent on traditional lobbying have declined from a peak of $36 million in 2005 to $8.2 million in 2018. [34] However, the organization also spends heavily on political advertising and grassroots campaigns to support its preferred legislation. [35] [36]

Its monthly print publication, AARP the Magazine, has the largest circulation of any magazine in the United States. [37]

The organization also produces radio and television programs and has a book division. For example, Prime Time Radio, hosted by broadcaster Mike Cuthbert, is a one-hour weekly interview program that focuses on the interests and concerns of Americans aged 50 and older. The program is heard on radio stations mainly in the United States. [38]

AARP was an active supporter of Obamacare throughout the 2009 to 2010 legislative session during which the law was debated and ultimately passed. Emails released by the House Energy and Commerce Committee in 2012 revealed that AARP’s top leadership was in regular contact with Obama administration senior officials to discuss strategy of how to pass the legislation. [39]

One email showed AARP senior vice president David Sloane sending the administration “as promised” his “message points” on Medicare. White House Deputy Chief of Staff Nancy-Ann DeParle assured him “I think you will hear some of your lines tomorrow” in President Obama’s speech. [40]

In August 2009, AARP unveiled a national advertising campaign in support of Obamacare, to ensure that “every member of Congress knows the 50-plus community wants action to fix what’s wrong with healthcare.” [41] AARP made this claim despite weeks of daily internal polling showing that its members opposed the president’s plan. [42]

“AARP worked through 2009-10 as an extension of a Democratic White House, toiling daily to pass a health bill that slashes $716 billion from Medicare, strips seniors of choice, and sets the stage for rationing. We know that despite AARP’s awareness that its seniors overwhelmingly opposed the bill, the “nonpartisan membership organization” chose to serve the president’s agenda.”

Some have suggested that AARP was financially motivated in its support for Obamacare. AARP earned considerable income from contracts with UnitedHealthcare in 2009 and 2010, at the height of the Obamacare debate. These contracts totaled over $1 billion. [44]

Some of the contracts included royalty payments allowing UnitedHealthcare to use the AARP brand on its marketing materials. UnitedHealthcare also contracted with AARP to provide “Medigap” supplementary policies, which pay for what traditional Medicare doesn’t. Beneficiaries pay their Medigap premiums directly to AARP’s Insurance Plan, which retains almost 5 percent of premiums.

The Capital Research Center reported on the benefits for AARP of Obamacare’s passage:

“Despite the Obamacare cuts, UnitedHealthcare will continue to pay AARP a royalty payment for its brand name—even if the number of its Medicare Advantage policyholders declines as premiums rise. But AARP’s income from the sale of its Medigap program should soar. It’s a win-win for AARP.” [45]

AARP has been accused of using scare tactics to convince seniors to oppose entitlement and social security reforms. [46] In 2005, AARP helped lead the effort to stop President George W. Bush’s plan for partial privatization of Social Security. AARP has stated, “We favor private accounts when they are in addition to Social Security, but not as a substitute.” [47]

AARP supports a tax structure whereby “the percentage of income paid in taxes should increase with a measure of ability to pay.” It also supports the “death” tax, known formally as the estate tax. [48]