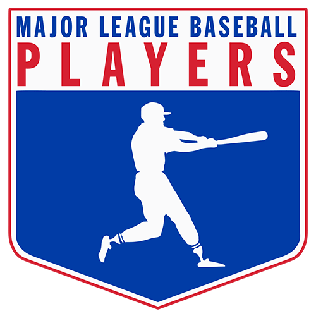 This is a logo for Major League Baseball Players Association. (link)

Formation of the Union

Attempts to organize baseball players began as early as 1885 with the formation of the National Brotherhood of Base Ball Players, founded by John Montgomery Ward in 1885. Ward, a professional baseball player who later earned a law degree from Columbia University, represented players against the National League and later served as president of the Boston Braves. [1] [2]

The predecessor to the contemporary Major League Baseball Players Association was founded in 1953. In 1965, the group began to explore organizing as a labor union. After initially interviewing former Vice President Richard Nixon as a potential candidate, a players’ committee that included pitcher Jim Bunning — later a Republican Congressman and Senator from Kentucky — hired Marvin Miller from the United Steelworkers to serve as executive director. [3] In his book on the 1981 players’ strike, author Jeff Katz noted that MLB owners came to regard Miller as a “Svengali who led the players around by their noses,” but asserts that modern professional baseball “is a creation of Marvin Miller.” [4]

In his first confrontation with MLB owners in 1966, Miller forced extension of an agreement that ensured that players would receive 60 percent of World Series TV and radio receipts and 95 revenue of All-Star game revenue (including gate receipts). [5]

Later that year, the MLBPA formed a licensing unit to handle image and likeness licensing for players. In 1968, the group forced baseball card company Topps to negotiate with it on behalf of players when they refused to pose for baseball card photos. The unit also negotiated a deal with Coca-Cola to use players’ likenesses on the underside of Coke bottle caps. [6]

In 1967, MLB owners refused to meet with Miller and representatives of the MLBPA who were seeking changes to baseball operations to limit doubleheader games, set standards for weather cancellations, and increase the minimum player salary. The refusal led directly to a vote in February 1968 to recognize the MLBPA as a labor union and enter into collective bargaining with the owners. A year later, Miller and the MLBPA negotiated a substantial increase in the owners’ contribution to the players’ pension fund after players voted down an earlier offer. [7]

In 1972, the players demanded a 17 percent increase in owners’ contribution to the Major League Baseball Players Association pension and medical plan. The owners refused and the players eventually voted 663-10 to strike. With Opening Day approaching, President Nixon intervened to demand that players and owners meet with federal mediators to resolve the strike. Eventually, it was resolved with a partial increase in the owners’ contribution, but all 86 missed exhibition games were canceled. [8]

In 1980, the players voted 967-1 to strike over negotiations for a new salary agreement. The strike lasted from April 1 to 8 but no games were cancelled. [9]

In 1981, the MLBPA called a strike from June 12 to July 31 over owners’ demands for compensation when they lost a player in the free-agency draft. The strike was the first in MLB history that caused the cancellation of regular-season games. After the free-agency issue was resolved, play resumed at the All-Stars game on August 9. The strike caused the season to be split into two halves, with teams that won their division in each half of the season advancing to the playoffs. [10]

Though largely considered a victory for the players, the 1981 strike led to the first perceptible decline in baseball’s popularity in American culture: 732 games were cancelled, and attendance and viewership declined notably in the second half of the season. The strike also poisoned relations between owners and players, with Miller and owners’ negotiator Ray Grebey so angered with each other that they refused to pose for a traditional handshake photograph after the strike ended. [11]

Players struck for two days in 1985 over salary negotiations, but 23 of 25 cancelled games were later rescheduled. [12]

In 1990, the owners locked players out for 32 days over proposed changes to free-agency and arbitration rules, prompting the cancellation of most of Spring Training and a postponement of Opening Day. [13]

In 1994, players voted to strike, and MLB became the first American professional sports league to lose its championship playoffs due to a labor stoppage. The worsening financial outlook for the league prompted owners to demand a salary cap, which the players refused. The owners forced a salary cap and revenue sharing and revised the league’s master agreement to give the MLB commissioner the power to impose labor agreements “in the best interest of baseball.” New MLBPA executive director Donald Fehr ordered a strike, which players approved on June 28. The last games were played on August 11, with players walking off later that night. [14] On September 14, MLB cancelled the remainder of the season, including the World Series. [15]

With no end to the strike in sight, President Bill Clinton ordered the owners and players back to the negotiating table in February 1995, to no avail. The owners began to prepare to play the 1995 season using replacement players, a move that caused Fehr to declare all MLB players free agents. Ultimately, the strike ended after then-U.S. District Court Judge Sonia Sotomayor (later a Supreme Court Justice) sided with the players and ordered play to resume under the expired collective bargaining agreement until a new one could be negotiated. [16]

The nearly eight-month strike is widely considered a disaster for professional baseball, and the MLBPA for the first time was the target of sustained criticism by fans and observers. Game attendance plummeted by 20 percent and took ten years to return to 1994 levels. Returning fans frequently booed the players. Three fans at Shea Stadium wearing t-shirts saying “GREED” leaped onto the field and scattered dollar bills at the players’ feet before being arrested. Fans booed Fehr when he attended a Yankees game, and Fehr responded by extending a middle finger to the stadium. However, the strike ultimately did result in a revenue-sharing agreement that many observers argue set the stage for MLB’s sustained financial growth and also averted another strike when the MLBPA collective bargaining agreement expired in 1997. [17]

In 2020-21, the owners locked players out during Spring Training and delayed Opening Day by one week. The dispute was later resolved, and the canceled games were made up. [18]